Meet the LEGO astronauts aboard Artemis I

No small steps here: NASA managers explain how they're using Artemis missions to inspire the next generation of scientists and engineers.

KENNEDY SPACE CENTER, Fla. - This hurricane season has not been kind to NASA's mega moon rocket as the space agency attempts to launch the Artemis 1 mission around the moon.

About a month after moving the Space Launch System (SLS) rocket and Orion spacecraft back into the Vehicle Assembly Building hangar due to Hurricane Ian, the 322-foot-tall launch vehicle arrived back at the Kennedy Space Center launch pad on Nov. 4. Still, another tropical system could thwart the next launch attempt.

NASA is targeting Nov. 14 at 12:07 a.m. to launch the SLS and Orion without astronauts on the Artemis 1 test flight around the moon and back. This will be the third try in four months. Two launches ended in scrubs due to technical issues. 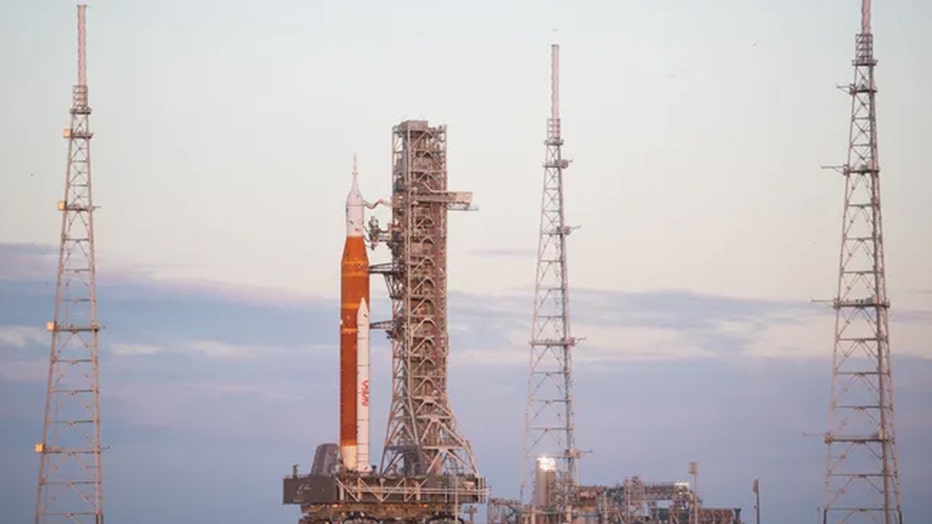 NASA’s Space Launch System (SLS) rocket with the Orion spacecraft aboard is seen atop the mobile launcher as it arrives at Launch Pad 39B, Friday, Nov. 4, 2022, at NASA’s Kennedy Space Center in Florida. (Credit: NASA/Joel Kowsky)

Nicole is forecast to strengthen to a Category 1 hurricane before making landfall Wednesday night or early Thursday. Regardless of its hurricane status, the FOX Forecast Center predicts the system will bring widespread wind, flooding and rain to Florida's east coast and the Eastern Seaboard.

NASA managers work with the Space Force's 45th Weather Squadron launch officers to determine if the SLS and Orion should remain on Launch Pad 39B through the worst of Nicole's impacts. A decision NASA leadership was also forced to make before Hurricane Ian's landfall in September.

A NASA spokesperson told FOX Weather that based on the current forecast, SLS and Orion will not be moved back into the VAB.

"Based on current forecast data, managers have determined the Space Launch System rocket and Orion will remain at Launch Pad 39B," the spokesperson said. "Teams at Kennedy will continue to monitor the weather, make sure all personnel are safe and will evaluate the status of the Monday, Nov. 14, launch attempt for the Artemis I mission as we proceed and receive updated predictions about the weather."

Kennedy Space Center staff are making preparations for the incoming storm. Under HURCON IV status, the Center is preparing for 50-knot sustained winds within 72 hours.

If NASA moves ahead with the launch, teams will need to begin fueling the moon rocket with more than 700,000 gallons of cryogenic fuel Sunday afternoon for the 12:07 a.m. liftoff Monday.

When will Nicole's impacts arrive at Kennedy Space Center? 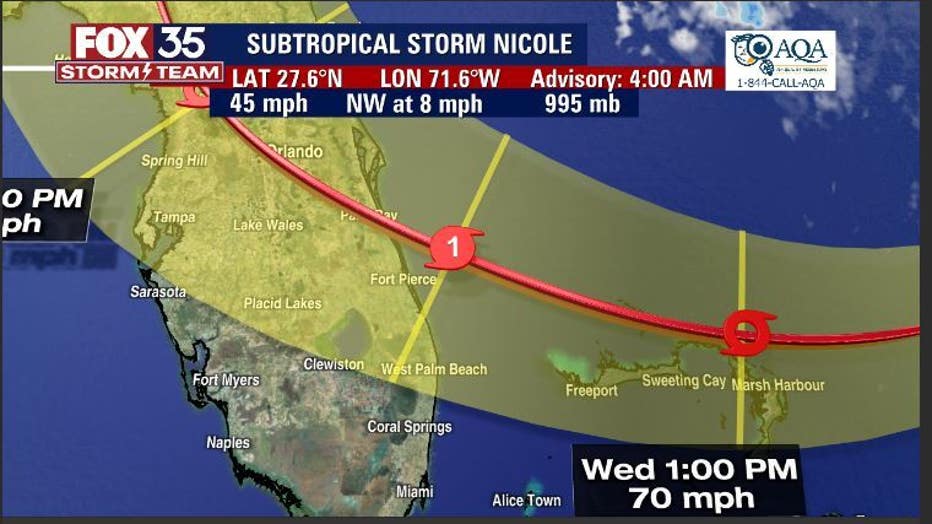 According to the FOX Forecast Center, Subtropical Storm Nicole will approach the northwestern Bahamas on Tuesday and move over those islands on Wednesday, then approach the east coast of Florida, where it will likely make landfall on Wednesday night or early Thursday.

Nicole is forecast to strengthen along its path gradually and is expected to become a Category 1 hurricane by Wednesday while it is moving near or over the northwestern Bahamas. By late Wednesday and into Thursday, the worst impacts from Nicole will arrive at Florida's east coast, including Brevard County, home to Kennedy Space Center.

WHAT IS NASA'S ARTEMIS 1 MISSION GOING TO DO?

Florida's Atlantic beaches are forecast to have high surf up to 12 feet on Thursday. Wave height won't impact launch operations at KSC, but winds and damage from storm debris could.

Wind gusts up to 50 mph are forecast for Wednesday evening on the Space Coast. The current forecast is within the margin NASA's SLS rocket is certified to withstand.

The SLS can remain at the launchpad with peak winds up to 74.1 knots (85 mph) at 60 feet up, NASA's SLS chief engineer John Blevins told reporters ahead of Hurricane Ian.

If the rocket is on the move to or from the VAB it can roll out under 40-knot sustained winds.

After the worst of Nicole's impacts passes, engineers will need to inspect SLS, Orion and the launch facility for any damages. Depending on how long that process takes and any damages will determine if the moon rocket leaves Earth for the first time next week.

Find the latest updates on this story at FOXWeather.com.