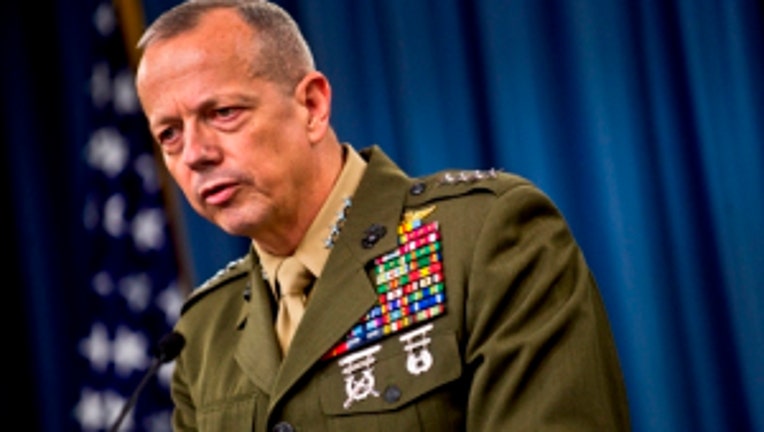 WASHINGTON -- The top U.S. commander in Afghanistan allegedly exchanged "flirtatious" e-mails with a woman who was supposedly being threatened by the CIA director's mistress, according to a Defense Department official.

Now, the commander, Marine Gen. John Allen, is being investigated by the Defense Department, the woman who traded flirty e-mails with Allen is asking for privacy, and the home of the former spy chief's lover has been searched by the FBI.

Confused? You're not alone.

These are the latest developments in the complicated and widening scandal that began with CIA Director David Petraeus and two women with military connections, and has now ensnared Allen.

It also threatens to bog down a newly re-elected President Barack Obama. His administration is preparing for critical fiscal negotiations with Congress, but instead finds itself facing questions about sex scandals and dealing with powerful lawmakers increasingly concerned about potential security risks and why they weren't told of the Petraeus affair sooner.

The FBI informed defense officials about the allegations involving Allen on Sunday, the Defense Department said, and Defense Secretary Leon Panetta referred the issue to the department's inspector general for investigation.

According to the Defense Department, Allen is under investigation for what one defense official referred to as "flirtatious" e-mail messages with Jill Kelley, the woman whose complaints about anonymous, harassing e-mails led to the discovery of Petraeus' affair with a woman later identified as his biographer, Paula Broadwell.

Petraeus, a retired four-star general and Allen's former military boss at the U.S. Central Command, or CENTCOM, resigned Friday from his post at the CIA after acknowledging the affair.

Although Obama continues to have faith in Allen's leadership, he nevertheless put the Marine Corps general's nomination to become NATO's supreme allied commander on hold pending the outcome of the investigation, Carney said.

Allen will retain his post as the commander of U.S. and allied forces in Afghanistan, pending Senate confirmation of a successor, according to the Defense Department. That vote is due Thursday, Senate officials said.

The investigation into Allen is in its early stages, but authorities are looking into some 20,000 to 30,000 pages of documents, a defense official told CNN. It is not clear how many of those include potentially inappropriate communications.

A U.S. official told CNN on Tuesday that many of the documents could be innocuous, involving routine business that Allen and Kelley were both involved in at the U.S. Central Command.

"In his duties at CENTCOM, Gen. Allen conducted a lot of legitimate business. She (Kelley) did a lot of work with CENTCOM, including Wounded Warriors and such," the official said. "It could be that 29,900 of the documents are legitimate business, and the few remaining raise a few eyebrows."

The potentially inappropriate messages were "flirtatious" in nature, a defense official who has been authorized to speak on the matter told CNN.

Sources familiar with Kelley have said the relationship between the two was not sexual. One said their communications were not of a sexual nature, while another allowed that the e-mails were flirtatious.

That Allen is remaining in command in Afghanistan suggests that there is no criminal issue, another U.S. official told CNN. But the official said the Defense Department's inspector general, an agency watchdog, could still find evidence of criminal conduct.

While the nature of the relationship between Allen and Kelley, if any, is unclear, evidence of an affair could subject the general to military prosecution. Adultery is a violation of military law.

"I think he ought to stay on unless there is some reason put forward that he has done something wrong, and then I think the military leaders will decide then what the actions will be," Sen. Carl Levin, D-Michigan, chairman of the Senate Armed Services Committee, said when asked whether he thought Allen should step down from his Afghanistan job.

Widespread media reports have described Kelley as a liaison at MacDill Air Force Base in Tampa, Florida, where the U.S. Central Command is headquartered. Both Petraeus and Allen were previously stationed at the base. A Central Command spokesman said she is a volunteer with no official position.

The Petraeus scandal also has raised questions about potential impacts on national security, including concerns that his paramour may have had access to his classified schedule and a New York Times report that she had classified documents on her laptop computer.

FBI agents were at Broadwell's Charlotte, N.C., home late Monday, said local FBI spokeswoman Shelley Lynch. She declined to say what the agents were doing there.