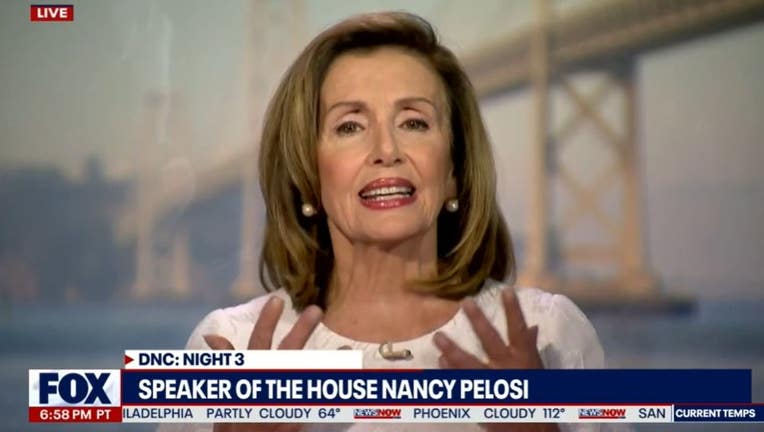 The range of topics touched on included gun violence, the ongoing pandemic, immigration, and the impacts of climate change, which has been a serious threat to the speaker’s home state of California with fire season becoming an intensifying and destructive annual event.

She acknowledged the 5 million Americans infected by COVID-19 and the 170,000 who have died from the virus on the current administration’s watch.

Pelosi said, “We will remember in November,” adding that Trump has demonstrated a heartless disregard for America’s spirit. “Instead of crushing COVID-19” Pelosi said the president and McConnell are more concerned with “crushing the Affordable Care Act and [its] existing conditions benefit.”

But the speaker’s message was largely rooted in women who succeed, especially in politics.

Pelosi, the first female Speaker of the House, portrayed Trump -- a president she has had a combative relationship with -- as someone who not only disrespects facts, but who also particularly disrespects women.

Prior to her speech, a television clip of her saying sometimes you have to “throw a punch...for the children,” on The Late Show with Stephen Colbert aired, as if to portray her toughness and resilience in the face of the Trump administration.

This narrative tied in to the convention’s backdrop that highlighted women’s increasing role in politics especially with a younger generation. A record-breaking number of women ran for office in the midterm elections. The convention's program touted the growing number of women in the House, an overwhelming number of whom are Democrats. Night three of the DNC played up that momentum as a time of breaking barriers and a night of strong women.

Pelosi has spent much of this week focusing on recent Trump administration cuts to the U.S. Postal Service and how that may impact the upcoming election. She said Postmaster General Louis DeJoy, a noted Trump donor, told her he has no intention of restoring removed blue mailboxes or sorting equipment and no plans for employee overtime.

“The Postal Service is Election Central during the pandemic, and Democrats will not allow the President to force Americans to choose between their health and their vote,” the speaker said in a written statement issued earlier Wednesday.