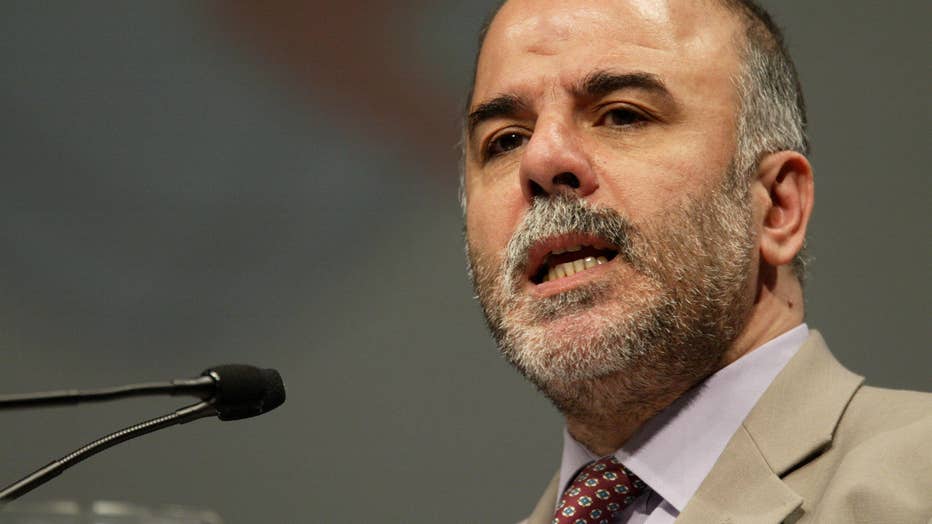 That's what the speaker of Iraq's parliament reportedly told Haider al-Abadi the day he was named to replace Prime Minister Nuri al-Maliki.

"May God help you," he told him, according to The New York Times.

In a sermon by an aide after Friday prayers in Najaf, al-Sistani said such change is a rare opportunity to resolve any outstanding security and political disputes, and called on Iraqi lawmakers to stand up to the "historic responsibility" presented to them and support Iraqi Prime Minister-designate Haider Abadi in his efforts to form a new government."

But he will likely need all the help he can get. Abadi will inherit the political reins of a country deeply divided along sectarian lines, a split that has aided a brutal campaign by extremist Sunni fighters with the Islamic State in Iraq and Syria, which refers to itself as the Islamic State.

So who is the man that world leaders, diplomats and Iraqis hope can hold the country together?

On paper, Abadi politically resembles the man he will replace.

Like al-Maliki, he is a member of the Islamic Dawa Party, one of the country's biggest Shiite political blocs. Like the man he'll take over from, his power base is with Iraq's majority Shiites.

And just like him, he was forced into exile by Saddam Hussein and he returned to Iraq after the Sunni dictator was toppled in the U.S.-led 2003 invasion.

But that's where the similarities likely end.

Abadi is viewed as a moderate and has shown more of a willingness to compromise than al-Maliki, Ranj Alaadin, an Iraqi specialist at Columbia University, told the BBC.

"He is very engaging, articulate and direct," Alaadin told the British network.

Abadi was born in Baghdad in 1952, according to his website.

A long-time member of the Dawa Party -- he is said to have joined as a teenager -- he was one of thousands of prominent Iraqis who left the country during Saddam Hussein's rule.

Abadi left to study abroad after receiving a bachelor's degree in 1975, and stayed away as Hussein tightened his grip on the country. Two of his brothers were not so lucky; they were executed in 1982 for belonging to the Dawa Party. The following year, the regime canceled Abadi's passport.

Abadi spent many years in Britain, where he received a doctorate in electrical engineering at the University of Manchester. His father, who had been a prominent Iraqi official, was accused of insufficient loyalty to the regime and was forced to retire in 1979. He moved to Britain and lived there until his death.

After Hussein was ousted, Abadi returned to Iraq in 2003 and became communications minister in the interim government, where his language skills and international contacts proved valuable.

According to his biography, he was put in charge of ridding the northern Iraqi city of Tal Afar of al Qaeda in 2005, and successfully brought tribes together in doing so. It may prove to have been useful experience; Tal Afar is now under the control of ISIS.

In interviews in recent weeks, he has stressed the need for unity and compromise in the face of a common enemy, saying all groups had been weakened in the face of the militant threat. He has argued fervently against the division of Iraq and said he is open to help from Iran, where many Dawa Party members lived in exile.

Al-Maliki will continue to serve as the country's caretaker Prime Minister -- as well as its top military commander -- until Abadi forms a new government.