Former President Donald Trump is running for president again. Trump made his plans official Tuesday night after teasing the potential of a comeback since before he even left the White House in 2021.

Former President Donald Trump announced the launch of his third campaign for the White House on Tuesday, looking to move on from disappointing midterm defeats and defy history amid signs that his grip on the Republican Party is waning.

Trump had hoped to use the GOP’s expected gains in last week’s elections as a springboard to vault himself to his party’s nomination. Instead, he finds himself being blamed for backing a series of losing candidates after Republicans failed to take control of the Senate. While the party was on the cusp of retaking control of the House on Tuesday, it could end up with its narrowest majority in decades.

Another campaign is a remarkable turn for any former president, much less one who made history as the first to be impeached twice and whose term ended with his supporters violently storming the U.S. Capitol in a deadly bid to halt the peaceful transition of power on Jan. 6, 2021. Just one president in U.S. history has been elected to two nonconsecutive terms: Grover Cleveland in 1884 and 1892.

Trump is also facing a series of intensifying criminal investigations, including a Justice Department probe into the hundreds of documents with classified markings that were discovered in boxes and drawers at his Mar-a-Lago club.

Now that Trump announced his bid, the speculation will soon start as to who he will pick to be his running mate. Here are some possible nominees. 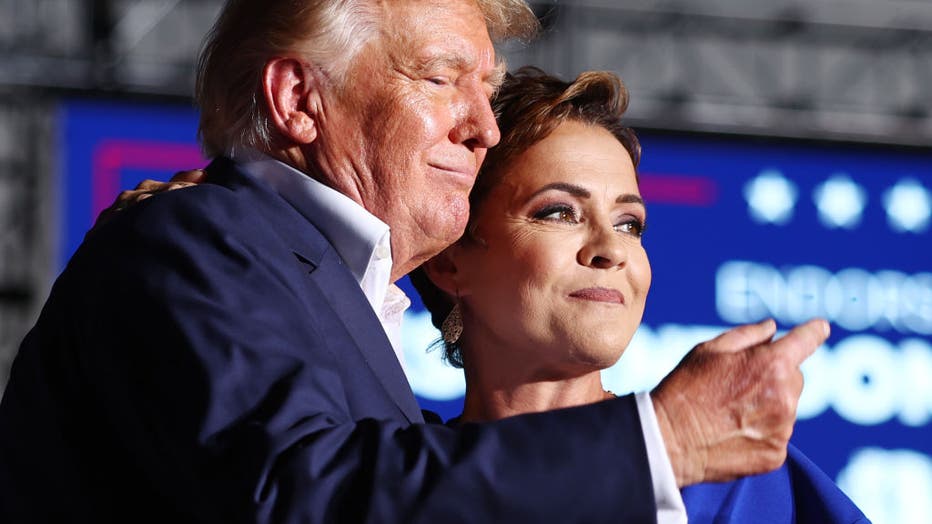 Former local television news anchor Kari Lake became a star in the GOP party for the 2022 midterm elections. However, she narrowly lost the gubernatorial race in Arizona to Katie Hobbs.

Polished in front of the camera and comfortable in front of a crowd, Lake built an enthusiastic following and drew international media attention.

Lake ran as a fierce critic of the mainstream media, which she said is unfair to Republicans. She earned Trump’s admiration for her staunch commitment to questioning the results of the 2020 election, a stand she never wavered from even after winning the GOP primary. She baselessly accused election officials of slow-rolling the vote count this year and prioritizing Democratic ballots as she narrowly trailed Hobbs for days following the election. 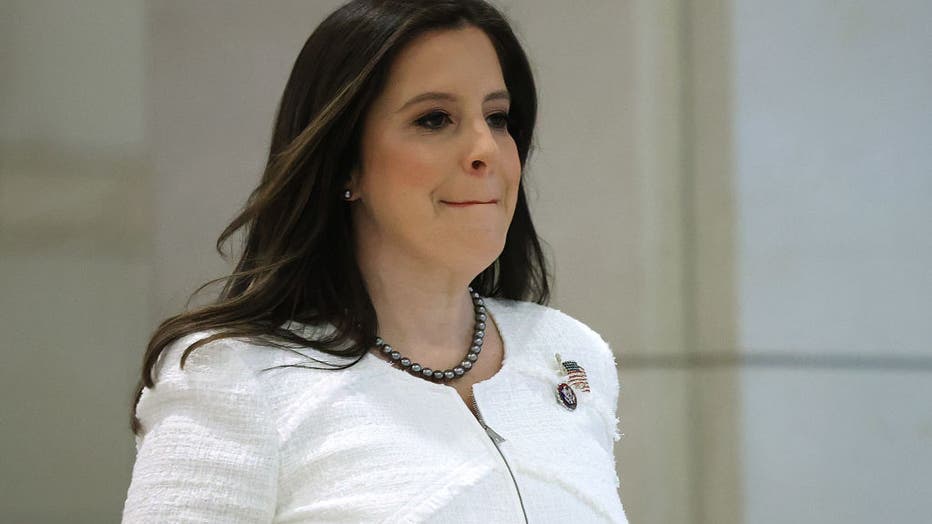 WASHINGTON, DC - MAY 14: Rep. Elise Stefanik (R-NY) arrives for a House Republican caucus meeting to pick a replacement for former caucus chair Rep. Liz Cheney (R-WY) in the U.S. Capitol Visitors Center on May 14, 2021 in Washington, DC. Stefanik, a

No. 3 House Republican Rep. Elise Stefanik has already endorsed Trump for president in 2024, becoming the highest-ranking congressional leader to publicly back the former president, even as he’s being widely blamed by other Republicans for failures in the midterm elections.

Stefanik, of New York, has been mentioned as a possible vice presidential contender on an emerging Trump ticket.

"It’s very clear President Trump is the leader of the Republican party," Stefanik said in a previous statement.

"I am proud to endorse Donald J. Trump for President in 2024," she said. "It is time for Republicans to unite around the most popular Republican in America, who has a proven track record of conservative governance."

Stefanik easily won her own reelection to another two-year term from New York, and is expected to cruise to her spot as chair of the House Republican Conference. She launched her career as a more moderate conservative voice and as one of the youngest members of the House, is seen as a rising star in Trump’s orbit. She has not tamped down talk of a potential vice presidential nod.

Stefanik and Trump remain close and work together, according to a person familiar with the situation and granted anonymity to discuss it. She helped raise money and backing for several newly elected members of Congress. 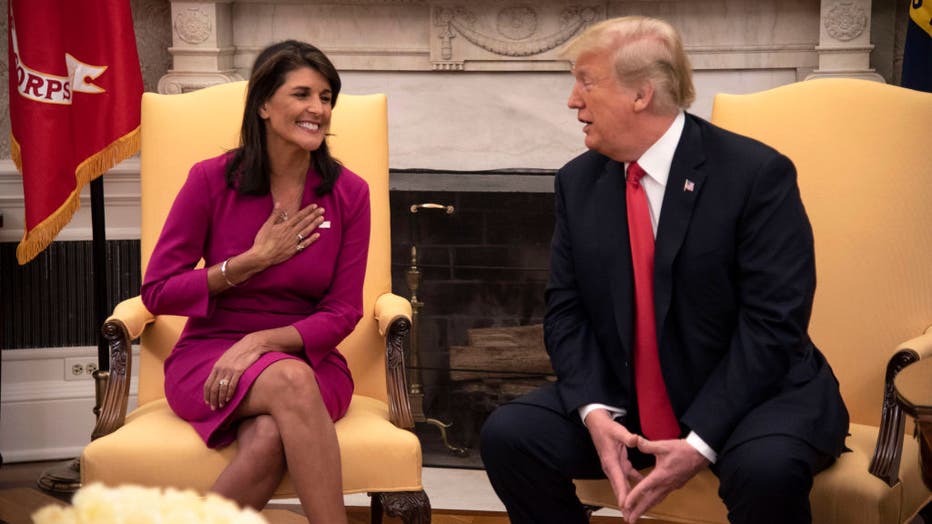 WASHINGTON, DC - OCTOBER 9: Nikki Haley, United States Ambassador to the United Nations, smiles as President Donald Trump compliments her after she announced her plan to resign at the end of the year in the Oval Office of the White House on October 9

Former U.N. Ambassador and South Carolina Gov. Nikki Haley, often mentioned as a possible 2024 GOP presidential contender, has said that she would not seek her party’s nomination if Trump opts to run a second time.

Since her 2016 resignation as South Carolina governor to join Trump’s Cabinet, Haley has maintained a delicate balancing act among Republicans who have in some ways been sharply split on the now-former president. In two years at the United Nations, Haley treaded a path of speaking out against Trump while not directly drawing his ire. She left the office on her own terms in 2018, a rarity then during a wave of staffing turmoil.

Haley has made several moves in recent years to fuel speculation her sights are on higher office. In 2019, she and her family moved back to South Carolina, purchasing a home in the Kiawah Island community. She also launched a political action committee, published a memoir and commanded as much as $200,000 for speaking appearances. 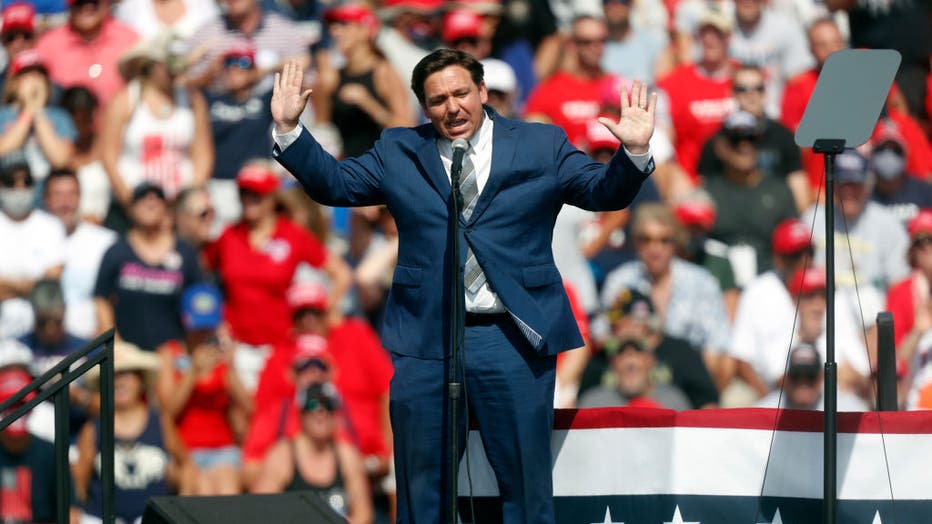 TAMPA, FL - OCTOBER 29: Florida Governor Ron DeSantis speaks to supporters of President Donald Trump before he arrives to give a campaign speech just four days before Election Day outside of Raymond James Stadium on October 29, 2020 in Tampa, Florida

Trump and Ron DeSantis have been on a collision course from the start.

The Florida governor won reelection to a second term Tuesday in a dominant victory over Democrat Charlie Crist, bolstering his rise as a prominent GOP star with potential White House ambitions.

He gained significant national attention during the coronavirus pandemic through his outspoken opposition to continued lockdowns and to mask and vaccine mandates, and eventually displayed an eagerness to wade into nearly any cultural divide.

DeSantis, for his part, has long praised Trump and mimicked his style, but has notably declined to put aside his own White House ambitions as Trump prepares to seek his old job again. In the clearest sign of tension, the two held dueling Florida rallies in the final days of this year’s midterm elections. At his event, Trump unveiled his new derisive nickname for DeSantis, calling him Ron DeSanctimonious. 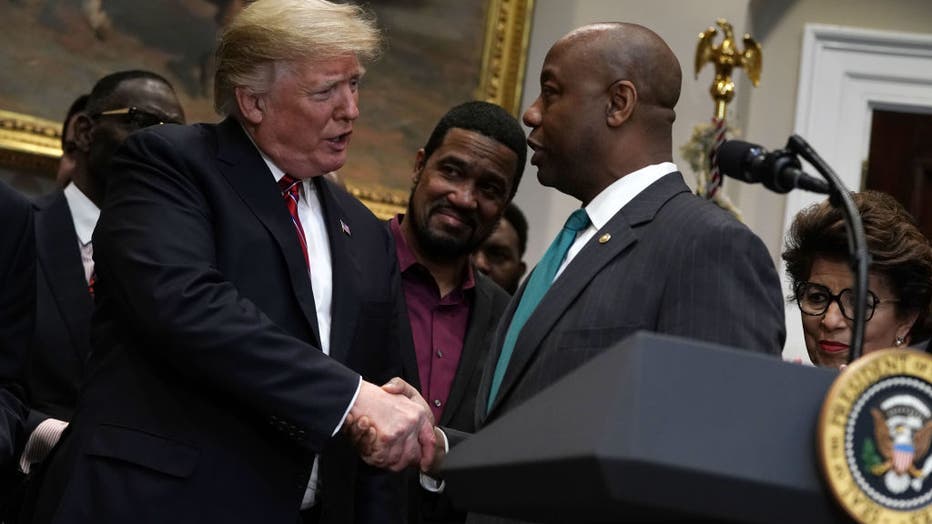 U.S. Sen. Tim Scott won reelection Tuesday to what he has said is a final six-year term from South Carolina, but the only Black Republican in the Senate may have bigger future political ambitions.

Scott, 57, has spent about as much time helping other Republicans as he has campaigning in 2022. He released a memoir called "America, A Redemption Story," where he tells his story of being raised by a single mother and his rise as a Black Republican in South Carolina.

Scott celebrated his win and didn’t say what the future holds. He has been mentioned as a possible presidential candidate in 2024, or later, depending on how the field shapes up. Scott has made several trips to Iowa and other states that get an early say in the presidential nomination process.

Trump endorsed Scott’s 2022 reelection bid. Trump previously issued a statement through his Save America PAC, saying Scott had his "Complete and Total Endorsement" and complimenting Scott’s work on behalf of the military, law enforcement and veterans. 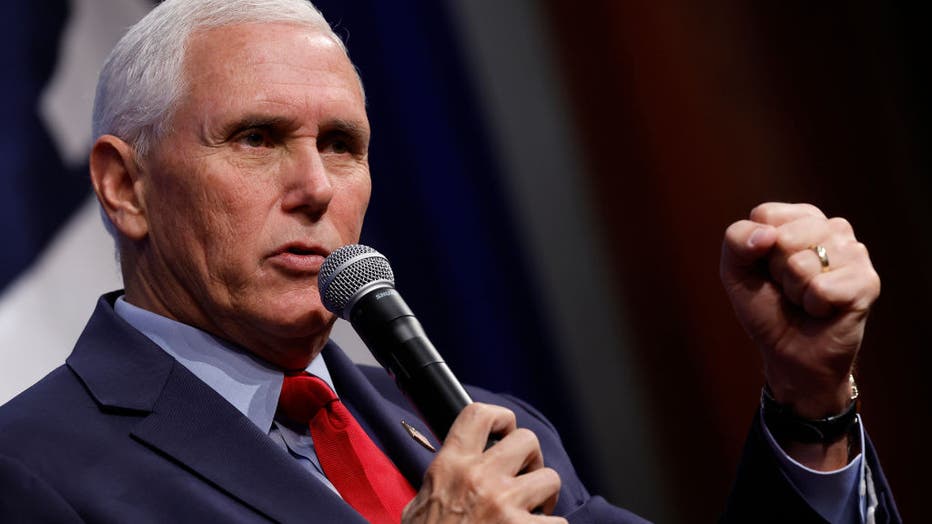 WASHINGTON, DC - OCTOBER 19: Former Vice President Mike Pence speaks during an event to promote his new book at the conservative Heritage Foundation think tank on October 19, 2022 in Washington, DC. During his remarks, Pence talked about his "freedom

In all but so many words, former vice president Mike Pence implied he will not be Trump’s running mate after holding that position during Trump’s first term.

Pence blames Donald Trump for endangering his family "and all those serving at the Capitol" on Jan. 6 in a new memoir released Tuesday.

In "So Help Me God," Pence recounts, for the first time in his own words, the Republican former president’s extraordinary effort to push him to overturn the results of the 2020 election and shares his account of the day thousands of rioters stormed the Capitol, with some chanting "Hang Mike Pence."

Pence, who spent years refusing to publicly criticize his old boss, makes clear that Jan. 6, 2021, was a breaking point in which, he writes, Trump’s "reckless words had endangered my family and all those serving at the Capitol."

Pat Cipollone: Pence should get Presidential Medal of Freedom for Jan. 6

Pat Cipollone, the former White House counsel to President Donald Trump, gave a deposition for the Jan. 6 House committee investigating the Capitol riot after months of asking him to come forward. During the testimony, Cipollone went out of his way to state how courageous he thought Vice President Mike Pence was for certifying the election, and told the committee that he felt Pence should be awarded the Presidential Medal of Freedom.

In a recent interview with ABC News’ David Muir, Pence was asked whether he believes Trump should serve again as president.

"I think that’s up to the American people. But I think we’ll have better choices in the future. People in this country actually get along pretty well once you get out of politics. And I think they want to see their national leaders start to reflect that same, that same compassion and generosity of spirit. And I think, so in the days ahead, I think there will be better choices," Pence responded.