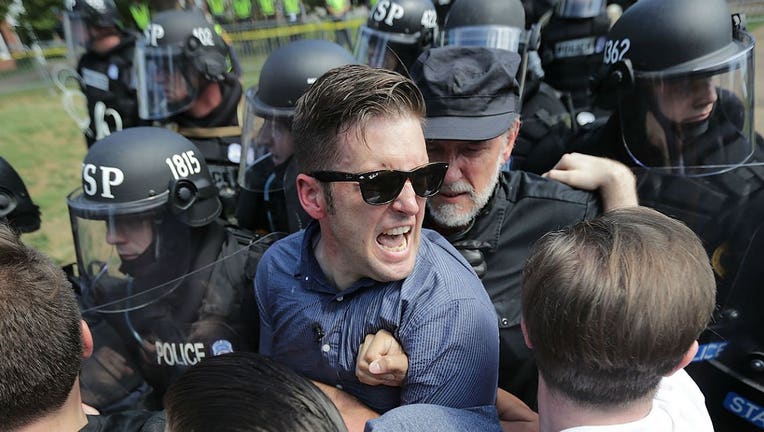 White nationalist Richard Spencer and his supporters clash with Virginia State Police in Emancipation Park after the 'Unite the Right' rally was declared an unlawful gathering in Charlottesville, Virginia, in 2017. (Getty Images)

The estranged wife of Richard Spencer says the prominent white nationalist was "physically, emotionally, verbally, and financially abusive" and attacked her on more than one occasion.

In divorce filings from Montana seen by BuzzFeed, Nina Koupriianova describes being hit, grabbed, dragged around by her hair, and "held down in a manner causing bruising."

Koupriianova, who married Spencer in 2010, says much of the abuse happened in the presence of their two young children. She says he tried to punch her in the face when she was nine months pregnant in 2017. She alleges that one of his favorite statements is: "The only language women understand is violence."

In the divorce filings, Koupriianova also alleges that Spencer often failed to pay bills or buy groceries for his family because he wanted to save his money for "the cause."

She says he started keeping a loaded gun on a table in their bedroom, easily accessible to their toddler daughter, after he was punched in the face on the day of President Trump's inauguration.

The filings state that Koupriianova, who has links to the far right in Russia, has been living apart from Spencer since July last year, the Guardian reports.

Spencer, who popularized the term "alt-right," denies the accusations. He tells the AP he is "not an abusive person" and his wife was "never in a dangerous situation." (Florida declared a state of emergency before a Spencer speech last year.)