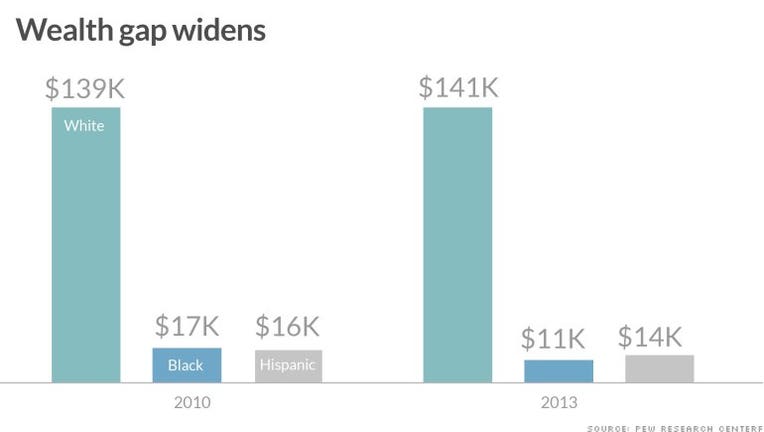 NEW YORK -- The Great Recession hit all Americans hard, but only whites have seen their wealth rise during the recent recovery.

And that's widening the already massive wealth gap between whites and other racial and ethnic groups to near record levels.

White households' median wealth ticked up to $141,900 in 2013, up 2.4% from three years earlier, according to a Pew Research Center report released Friday.

Net worth for black households dropped by a third during that time to $11,000. Hispanic families experienced a 14% decline in wealth to $13,700.

Whites have 13 times the net worth of blacks, the largest wealth gap that's existed since George H.W. Bush was president in 1989. The ratio of net worth between whites and Hispanics now stands at more than 10, the widest it has been since 2001.

Much of the focus in recent years has been the growth in income inequality, with the Top 1% capturing most of the post-Recession gains. But wealth inequality is also troubling.

Minority households' median income fell 9% between 2010 and 2013, compared to a drop of only 1% for whites. So minority households may not have been able to sock away as much or may have had to use more of their savings to cover expenses.

Also, the financial markets have rebounded much more than housing in recent years. Since whites are more likely to own stocks, they have seen a bigger wealth boost.

Real estate, on the other hand, makes up a big chunk of blacks' and Hispanics' net worth. But homeownership declined faster among minorities than whites between 2010 and 2013.

Only 47.4% of minorities were homeowners in last year. But 73.9% of whites owned homes.

It takes some digging to find these racial and ethnic disparities, which are masked when looking at the nation's overall median wealth. For all households, median wealth slipped slightly to $82,300 last year, down only 1.1%.