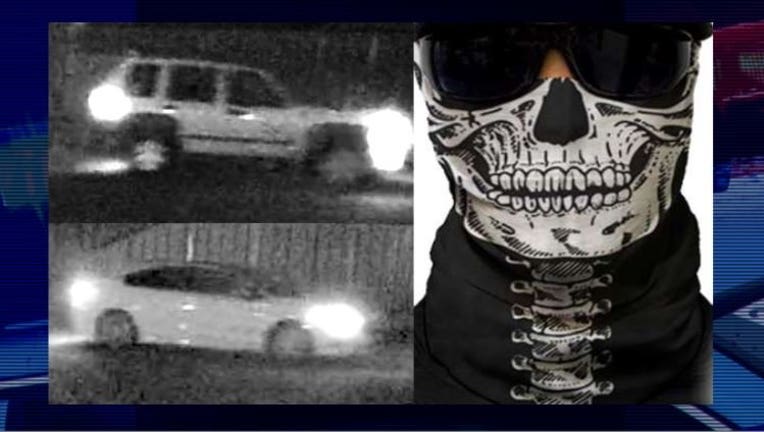 The car next to it, on the bottom, is the suspected getaway ride they used. Deputies think it's possibly a Ford Fusion, or a similar sedan. The SUV above it, possibly a Jeep Liberty Sport, was seen around the neighborhood a few days before, possibly casing the house.

They're hoping you can help find the vehicles -- and the three masked men who forced their way into a family's home in the Renton Highlands last month -- demanding money and meth.

There were many terrifying moments for the family as armed robbers burst into their home demanding the money and drugs on March 4th.

King County Sheriff’s Deputies say three suspects (one white male, one black male and one unknown race male) held a man and his wife at gunpoint and threatened to shoot their 20-year-old and 17-year-old boys who were also home at the time.

The sheriff’s department believes the victims may have been wrongly targeted.

“Guns at our face, masks,” victim Steve Guggenmos described the terrifying ordeal, and what the would-be robbers asked him, “Where’s the meth? Where’s the cash?”

Guggenmos says he and his family’s world were turned upside-down.  He showed a gash on his head where the robbers beat him with a gun. “Should have gone in an ambulance,” he said.

Guggenmos says the dramatic scene lasted maybe ten minutes and he believed he and his loved ones were going to be killed.

“(They) grabbed my wife by her hair, dragged her down the hallway to her teenage children’s rooms,” he said.

Sheriff’s deputies say the four robbers then took off with some cash and several cell phones.

A K9 track ended not far from the house on southeast 141st place – investigators believe that is where the robbers jumped into a getaway car.

"Detectives have done a lot of work to try to canvas the neighborhood and find anybody that has cameras and we've kind of hit the end of the road, where we don't have a lot of other leads at this moment, so our hope is putting it out to the public and if anybody recognizes these cars, or if anybody's ever seen these skull-type masks that the three suspects were wearing and that sounds familiar, or they've seen them lying around, or they've head somebody talk about going and robbing somebody and wearing a mask, we're hoping that those people will call in," said King County Sheriff's Sgt. Ryan Abbott.

Plus, only a few days ago, Guggenmos says they had to call 911 after spotting strangers in their backyard. Police are looking to see if that incident is connected.

For now, the victim and his family believe the robbers picked the wrong house.

Plus, to top it off, Steve’s wife just went through surgery for breast cancer.

He’s grateful nobody else was hurt and appreciates the outpouring of support they’re getting from friends and neighbors.

“Know your neighbors, it’s really super important in this time,” he said.

If you know anything that can help King County Sheriff's deputies track down the vehicles or the suspects, use the P3 Tips App on your smart phone to submit the information to Crime Stoppers, or call the hot line at 1-800-222-TIPS(8477). It's always anonymous -- you never give your name -- and you'll get up to a $1,000 cash reward if your tip helps lead to any arrests in the case.