BEIJING — Hundreds of relatives of Malaysia Airlines Flight 370 passengers marched on the Malaysian embassy in Beijing Tuesday, rejecting the government’s conclusion that the flight crashed into the Indian Ocean with no survivors.


The rare public protest in China appeared to have the support of the Chinese government, which provided the buses to transport family members, according to one relative.

At the same time, Beijing took pains to keep the protest under control, girding the embassy with military police, city cops and undercover security who scuffled with relatives trying to break through the security cordon to speak to the press. Many wore white t-shirts reading, in English, "Pray for MH370."

"We want our families. We want the truth," read hand-lettered signs.

A 30-year-old engineer who pushed through the security to speak to the press said that families were not willing to give up hope until debris of the plane is found," said Wang Zhen, 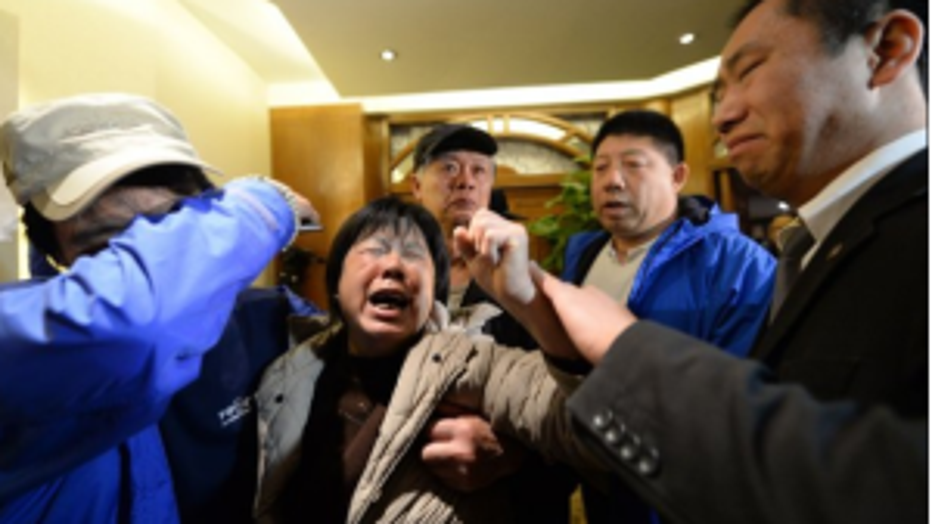 Relatives of passengers on Malaysia Airlines Flight 370 weep after hearing the news that the plane plunged into the Indian Ocean.

whose parents were both on the flight from Kuala Lumpur to Beijing.

"We are realistic. We know that with each passing day, the chance of our family coming back alive are slimmer, but we still need to know more," said Wang.

Malaysia announced late Monday night that "beyond a reasonable doubt" there were no survivors from the March 8 flight from Kuala Lumpur to Beijing and that it has crashed off the coast of Australia.

But Australian officials appeared to publicly dispute the Malaysian conclusion as well.

"This is a mystery," defense minister David Johnston told reporters Tuesday at Pearce Airbase. "Until we recover and positively identify a piece of debris -- all is speculation."

Tens of thousands of Chinese called for a boycott of Malaysian products. A poll on the popular Sina Weibo site found that 77% of Chinese who responded would reconsider plans to travel to Malaysia as a result of the crash.

The wait for definitive answers could take longer than expected because of gale-force winds off the Australian coast, which forced search teams to suspend flights over the area. There had been hopes that objects spotted by airplanes on Monday could be retrieved and analyzed, perhaps putting an end to the 18-day old mystery.

Australian Air Marshal Mark Binskin gave a grim assessment of the difficulties of locating the wreckage in the vast, deep southern Indian Ocean, saying it would more difficult than finding a "needle in a haystack."

"We’re still trying to define where the haystack is," he told reporters.

Beijing on Tuesday asked that the Malaysian government release the satellite data.

"We demand the Malaysian side to make clear the specific basis on which they come to this judgment," Deputy Chinese Foreign Minister Xie Hangsheng was quoted by state media saying after an emergency meeting with Malaysian ambassador Iskandar Bin Sarudin.

The Chinese government kept up a barrage of attacks against Malaysia, with an editorial in the official New China News Agency, saying its declaration that the plane was lost was "clumsily conceived and sadly, even more poorly executed."

Some Chinese families complained that they first heard the announcement through text messages Monday night that were only in English.

At Beijing’s Lido Hotel, where families have been waiting for answers, a middle-aged man smoking outside with other men, said they hoped for the Chinese government to put pressure on Malaysia.

"It’s good that we protested. Our government can only get more involved now. It is better," said the man, who refused to give his name.