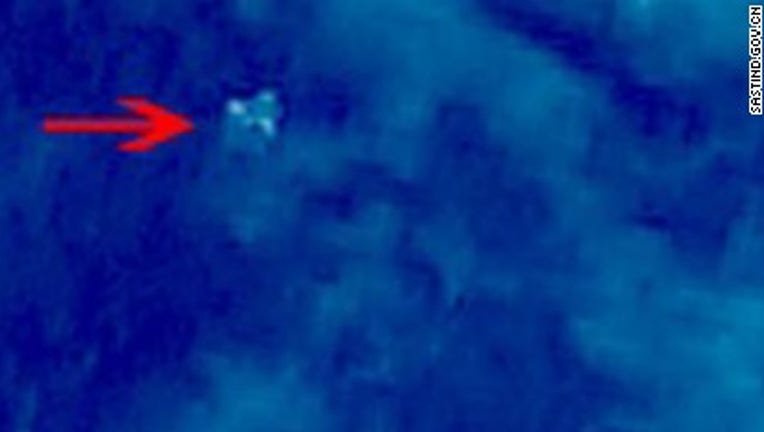 (CNN) -- Vietnamese searchers reported seeing no sign of debris Thursday when they flew over an area of sea that Chinese authorities had flagged as the location of possible remnants of missing Malaysia Airlines Flight 370.

The plane from Vietnam's National Committee for Search and Rescue carried out the flight Thursday morning, said Doan Luu Van, International Affairs Coordinator with the Civil Aviation Administration of Vietnam.

He said the committee would send another plane "early this afternoon" to the same location, which had been identified by Chinese satellite imagery.

A Chinese satellite looking into the mysterious disappearance of Malaysia Airlines Flight 370 "observed a suspected crash area at sea," a Chinese government agency said -- a potentially pivotal lead into what has been a frustrating search for the Boeing 777.

China's State Administration for Science, Technology and Industry for National Defense announced the discovery, including images of what it said were "three suspected floating objects and their sizes."

The images in the Strait of Malacca were captured on March 9 -- which was the day after the plane went missing -- but weren't released until Wednesday.

This isn't the first time that authorities have announced they were looking into objects or oil slicks that might be tied to plane, which went missing last Saturday.

Earlier Wednesday, officials announced they had once again expanded the search area. It now covers nearly 27,000 square nautical miles, more than double the size of the area being searched just a day before.

Such a dramatic expansion at this stage of the investigation is troubling, said CNN aviation expert Richard Quest.

"At this stage in the investigation and search and rescue, I would have expected to see by now a much more defined understanding of what the route was, where the plane was headed and a narrowing of the search consequent upon that," he said on CNN's "New Day."

Indeed, the lack of a clear direction prompted Vietnam to say that it's pulling back on its search efforts until Malaysian authorities come up with better information on where to look for the plane.

Malaysia Airlines Flight 370 vanished early Saturday with 239 people on board during a flight between Kuala Lumpur and Beijing.

"Up until now we only had one meeting with a Malaysian military attache," he said.

For now, Vietnamese teams will stop searching the sea south of Ca Mau province, the southern tip of Vietnam, and shift the focus to areas east of Ca Mau, said Doan Luu, the director of international affairs at the Vietnamese Civil Aviation Authority.

"We have been very consistent in the search," he said.

But even figuring out where authorities believe the plane may have gone down has been a difficult and shifting proposition.

In the immediate aftermath of the plane's disappearance, search and rescue efforts were focused on the Gulf of Thailand, along the expected flight path between Malaysia and Vietnam.

Over the weekend, authorities suddenly expanded their search to the other side of the Malay Peninsula, in the Strait of Malacca, where search efforts now seem to be concentrated.

That location is hundreds of miles off the plane's expected flight path.

An explanation appeared to come Tuesday when a senior Malaysian Air Force official told CNN that the Air Force had tracked the plane to a spot near the small island of Palau Perak off Malaysia's west coast in the Straits of Malacca.

The plane's identifying transponder had stopped sending signals, too, said the official, who declined to be identified because he was not authorized to speak to the media.

Malaysia's civilian administration appeared to dispute the report, however.

The New York Times quoted a spokesman for the Malaysian prime minister's office as saying Tuesday that military officials had told him there was no evidence the plane had flown back over the Malay Peninsula to the Straits of Malacca.

Then, in another shift, Malaysian authorities said at a news conference Wednesday that radar records reviewed in the wake of the plane's disappearance reveal an unidentified aircraft traveling across the Malay Peninsula and some 200 miles into the Straits of Malacca.

However, it wasn't clear whether that radar signal represented Malaysia Airlines Flight 370, Gen. Rodzali Daud, head of the Malaysian Air Force, said at the news conference.

Rodzali said that officials are still "examining and analyzing all possibilities" when it comes to the plane's flight path.

Malaysian officials are asking experts from the U.S. Federal Aviation Authority and National Transportation Safety Board to help them analyze the radar data.

The FAA said Wednesday that it "stands ready to provide any necessary additional support."

The agency has already sent two technical experts and another official to Kuala Lumpur as part of a NTSB investigative team.

The search zones includes huge swaths of ocean on each side of the Malay Peninsula, as well as land.

Forty-two ships and 39 planes from 12 countries have been searching the sea between the northeast coast of Malaysia and southwest Vietnam, the area where the plane lost contact with air traffic controllers.

But they are also looking off the west coast of the Malay Peninsula, in the Straits of Malacca, and north into the Andaman Sea.

So far, searchers have found no trace of the plane.

What happened leading to the plane's disappearance also remains a mystery. Leading theories include hijacking, an explosion or a catastrophic mechanical failure.

Suggestions that the plane had veered off course and that its identifying transponder was not working raise obvious concerns about a hijacking, analysts tell CNN. But a catastrophic power failure or other problem could also explain the anomalies, analysts say.

In a sign authorities are looking at all options, Kuala Lumpur police told CNN they are searching the home of the airliner's Capt. Zaharie Ahmad Shah.

They were also questioning a man who hosted two Iranians who boarded the flight on stolen passports, the man -- Mohammad Mallaei -- told CNN on Wednesday.

Authorities have previously said they do not believe the men had any connection to terror groups.

As the vexing search drags on, frustration has grown among friends and family of those who were on board.

"Time is passing by. The priority should be to search for the living," a middle-aged man shouted before breaking into sobs during a meeting with airline officials in Beijing on Tuesday. His son, he said, was one of the passengers aboard the plane.

Other people at the meeting also voiced their frustration at the lack of information.

Most of those on the flight were Chinese, and the Chinese government has urged Malaysia to speed up the pace of its investigation.

"The families involved have to understand that this is something unexpected," Najib said. "The families must understand more efforts have been made with all our capabilities."