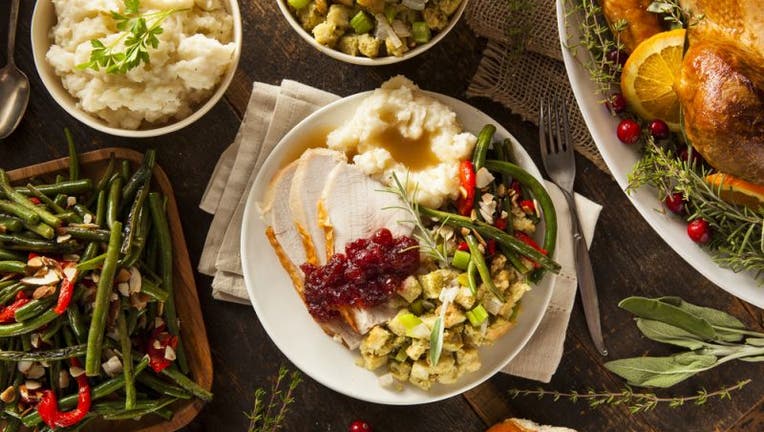 With Black Friday, December gift shopping and winter travel, it’s easy to forget about another holiday cost: the price tag on a Thanksgiving dinner.

In 2015, average American families will spend $50.11 for their Thanksgiving spread. That’s more than twice as much as they spent in 1987, when a 10-person turkey dinner cost just $24.51, according to data from the American Farm Bureau Federation. The cost breakdown includes average prices for a dozen dishes, from sweet potatoes ($3.57 for three pounds) to green peas ($1.52 for one pound) to stuffing ($2.61 for 14 ounces). And a 16-pound frozen turkey? The bird of the season will run Americans an average of $23.04, up from $21.65 last year.

Of course, most of the upward trend can be explained by inflation. In 2010 dollars, the Turkey Day bill has held remarkably steady, sticking around $45 for much of the last two decades.

For big-city dwellers, that $50 total likely sounds like a steal. But America’s urbanites should keep in mind that costs go way up in metropolitan areas like Los Angeles and New York City. The Farm Bureau’s Deputy Chief Economist John Anderson also notes the numbers are based on “normal serving sizes.” So consider multiplying that $50 by however much your family members over-gobble their turkey.

Even when you account for inflation, however, the price has ticked up noticeably since 2005. One likely culprit? Mr. Turkey. Over the last decade, frozen turkey prices have experienced a 50 percent uptick, according to data from the Bureau of Labor Statistics.

As turkey production falls, turkey prices go up, a simple supply-demand phenomenon that occurred most obviously in the wake of the 2008 financial crisis. Compare turkey’s recent price jump to a more stable ingredient, like the potato, which has seen its price rise steadily and predictably, in tune with inflation:

If you’re wondering why you haven’t seen this bump in turkey prices, it could be that your local grocery store is hiding the increased cost. Supermarkets will often heavily discount the price of turkey to attract customers, knowing they’ll make up the difference in sales of stuffing, wine and pumpkin pie. The turkey serves as a loss leader, while the grocery store eats the increasing cost.

Speaking of wine, it’s important to note that the Thanksgiving meal estimate does not include alcohol, which can easily balloon your bill. If you assume that seven of your 10 Thanksgiving guests will imbibe two drinks, that’ll run you another $25, based on the the average price of wine and the recommended serving size of alcohol.

And once again, this all assumes you don’t pour just a little more freely during the holidays. For the disciplined, cost-conscious family, take these estimates at face value. But as long as we’re talking about “average Americans,” consider adjusting for real-world conditions. Trust us: You'll be glad you spent the extra $20 as you dive into your third piece of pumpkin pie.