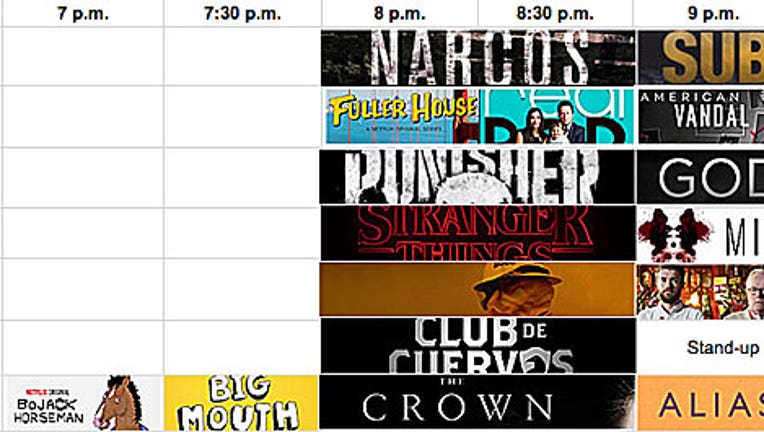 Netflix has successfully changed the way a lot of people watch television with its streaming service and all-at-once release model.

What it hasn't changed, however, is the kind of programming it thinks people want to watch. Delivery system aside, Netflix is at heart a broadcaster: The company's goal is to keep growing its subscriber base with enough programming to justify the $10 or $12 monthly subscription fee. That means attempting to be all things to all people as best it can.

The service is also releasing enough programming between September and the end of the year that if episodes launched one at a time, they could fill out a FOX-like 15-hour weekly schedule.

Here's how TV By The Numbers would schedule NBN -- the Netflix Broadcasting Network. Note: All shows listed are scheduled for release on Netflix between Sept. 1 and the end of 2017.

Monday:
Start your week by traveling the globe -- just watch out that you don't end up dead. Season 3 of "Narcos" kicks off the night, followed by the intense, Rome-set new drama "Suburra."

Tuesday:
Get ready for wall-to-wall laughs! First up, gather the kids for Season 3 of "Fuller House," with more heartwarming stories from the Tanner-Fuller family. Then head down from San Francisco to Hollywood for the misadventures of "Real Rob."

After the kids are asleep, stay tuned for the hilarious new "American Vandal," followed by visionary Spike Lee's "She's Gotta Have It."

Wednesday:
When the going gets tough, the tough head to Netflix Wednesdays. First, Frank Castle (Jon Bernthal) from "Daredevil" heads up his own series -- and is out for revenge in "The Punisher." Then, the writer of "Out of Sight" and "Get Shorty" takes you to the old West, where a murderous band of outlaws look for vengeance in "Godless."

Friday:
Netflix's award-winning documentaries get center stage. Watch the brave men and women of "Fire Chasers," the humorous "Jack Whitehall: Travels with My Father" and a rotating group of gripping nonfiction films. Plus, kick back with "Chelsea" in late night!

Saturday:
Football in the afternoon, futbol in the evening. Start the night with the antics of "Club de Cuervos" -- and end it laughing, with stand-up comedy specials from Jerry Seinfeld, Marc Maron, Patton Oswalt and more.

Sunday:
The best laughs, the best dramas, all in one place. Everyone's favorite depressive talking horse is back in "BoJack Horseman" at 7, followed by a new group of misfits in "Big Mouth" at 7:30. Then things get serious with "The Crown" and the stunning new drama "Alias Grace."