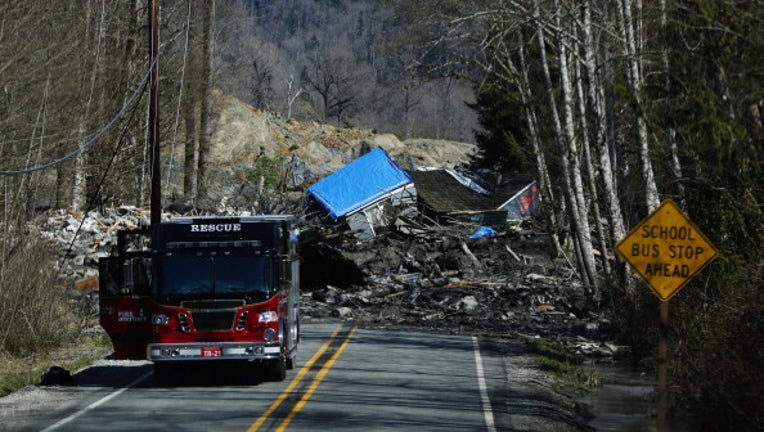 ARLINGTON -- What's the quickest explanation for the deadly Washington mudslide?


Blame the rain. There's been lots and lots of rain.

Experts said Monday that the primary reason a 1,500-foot-wide segment of hillside in Snohomish County suddenly cut away and pummeled the homes below, killing at least 14 people, could probably be blamed on the weather.


Nearby Arlington has reported 7.33 inches of rain so far this month, almost double the average for March and the area's fourth-wettest March on record.

Saturday's mudslide just east of Oso was so wet and sticky that firefighters initially sank up to their armpits and had to be rescued by rope.

So was it storming when the mudslide happened?

No. The rain was only part of the story behind Saturday's tragedy, which occurred on a bright, sunny day. "Everyone was excited about a nice spring day," said Brent Bower, a hydrologist for the National Weather Service in Seattle, "until that happened."

Landslides of various kinds occur in all 50 states, killing about 25 people and causing $1 billion to $2 billion in damages every year, according to the U.S. Geological Survey.

But experts in Washington state said it was unusual for such a huge mass of hillside to suddenly cut away.

"This is one of the biggest landslides I've seen," Dave Norman, a geologist for the Washington State Department of Natural Resources, told reporters Monday.

But haven't mudslides happened in Washington before?

Yes. In fact, a history of mudslides is etched into the landscape of western Washington, where more than 10,000 years ago a glacier from British Columbia melted and left behind the silt and other sediments that make up much of the soil in the area.

That soil tends to be loose, which has allowed rivers - like the Stillaguamish River along the mudslide site - to carve out valleys and steep hillsides, according to David Montgomery, a geologist at University of Washington.

Those hillsides are often the ones that collapse when they become oversaturated with water and the forces of pressure and gravity take over.

"There’s deposits of things like this around western Washington," Montgomery told the Los Angeles Times, referring to the geologic remains of previous mudslides cutting away from the region's hillsides and dumping their remains below. "Once they fail, they stick around. … You can see evidence of their failure for a long time."

How often do these huge slides happen?

"They don’t tend to happen all that often in human time. But if you look in geologic time, they’re not that uncommon up here," Montgomery said.

For example, the hillside that ripped away on Saturday had suffered previous mudslides in 2006 and the 1960s, experts said, although Saturday's was thought to be larger.

"There have been many historical landslides in this valley since the glaciers receded," said Norman, the state geologist.

Montgomery added of the ruined hillside: "At this particular place, what you’re seeing, essentially, is the process that had widened that valley over the last . … What you’re seeing is a landscape still recovering from glaciations. It’s a 15,000-year hangover."

OK, so the mudslides are part of historical forces that have made the area what it is today. But for the people living there, is there any way to predict them?

Not precisely, according to Norman, the state geologist: "This is something that's not predictable, and I would say it's an unknown."

But how much was "unknown" will likely now be up for debate.

The Seattle Times has obtained a 1999 report filed the U.S. Army Corps of Engineers warning of “the potential for a large catastrophic failure" on the hill where the mudslide happened.

One geomorphologist who has studied slides on the hill for decades, Daniel Miller, told the Seattle Times he was "shocked" construction had continued in the area after a smaller 2006 mudslide on the same hill blocked the Stillaguamish River and threatened the homes in the area.

But other experts said that, in general, Washington's mudslides are hard to anticipate.

Brent Bower, a National Weather Service hydrologist, said the kinds of mudslides that happened in Los Angeles were often predictable because they came from wildfire-charred hillsides.

In Washington state, it's much more of a guessing game, Bower said.

"We get rain everywhere, but not everywhere slides," Bower said. "It’s not certain places at certain times. But we don’t really know why that is. ... We’ve had storms that produce thousands in one storm, but we can’t be real precise about the location and the timing, like you can with the burn-scar ones."

Even then, the actual slide might happen some time after a big storm, Bower said.

"Sometimes it slides a day or two after. We usually tell the threat will dissipate after a day or two. But it’s sometimes a sunny day.”