SEATTLE -- A major construction project in the heart of the Emerald City will likely cause traffic tie-ups on SR 99 and side streets on Monday and Tuesday.

The state Department of Transportation is moving forward with the tunnel project despite Bertha's problems near Seattle's waterfront. On Monday and Tuesday, SR 99 is closed between the Battery Street tunnel to Valley Street. All traffic will be diverted onto side streets like Mercer and Dexter.

Aurora should re-open to traffic on Wednesday morning at 5 a.m. WSDOT says traffic lights have been timed differently and more uniformed officers will be directing traffic to help ease congestion.

MORE: How the commute stacks up right now

David Sowers is the administrator of the construction project for WSDOT. Sowers says drivers need to plan ahead.

“Just give yourself more time to get down here, Sowers said.  "Be courteous to your neighbor as you’re driving in. It’s going to be a long drive potentially if you’re going to use aurora. And certainly the people taking the bus are going to have to plan a little bit more time in their commute this morning.”

Here’s an outline of the closures and work schedule from WSDOT:

Transportation officials said the closures will cause delays as traffic increases on I-5 and side streets in downtown Seattle.

This extended closure will allow crews to demolish and replace a section of highway at the north end of downtown Seattle.

SEE IT: Maps of the closures 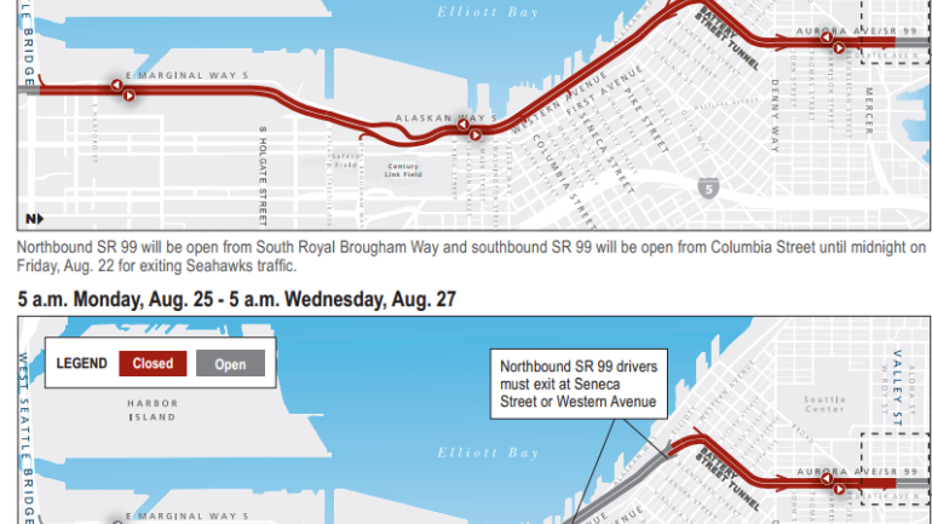