‘We’ve had to wait too long’: Ellis family hope for answers soon from investigators

In the time since the death of Manuel Ellis while in Tacoma Police custody, the George Floyd incident happened, charges were filed, and now there has been a verdict found; in comparison, the Ellis family is still waiting for answers.

TACOMA, Wash. - In the time since the death of Manuel Ellis while in Tacoma Police custody, the George Floyd incident happened, charges were filed and a jury verdict determined; in comparison, the Ellis family is still waiting for answers.

On Tuesday, Derek Chauvin was found guilty on all counts in the death of George Floyd’s.

"I feel like there has been justice. Justice has been served. I think it’s a huge step, especially for African Americans. Our lives matter," said Matthew Ellis.

Matthew said he hopes this verdict impacts his brother’s case.

On March 3rd Matthew's brother, Manuel, died while in police custody. Since then, Matthew and his family have waited for some sort of closure.

"It’s very hurtful and we’ve had to wait too long. We’ve had to wait over a year now and still no word, and who knows when we’re going to we’ll hear something," he said.

The investigation into his brother’s death has bounced from agency to agency. Since November, the State Attorney General’s office has been investigating.

The AG’s office released a statement on March 31st saying hundreds of hours of time have gone into the investigation. In the statement, the AG’s office said it would need at least another four to six weeks to investigate.

"We are way past the time for prosecution in the Manuel Ellis case. There are few excuses that would justify failure to prosecute this case at this time," said James Bible.

Bible is the attorney for the Ellis family. He says he hopes the verdict in the Derek Chauvin case will lead to some sort of action in the Ellis case.

"The fact that the state of Minnesota even prosecuted, serves as notice that Washington State needs to be doing something similar when it’s officers actually violate the law," he said.

Matthew said he is tired of waiting for answers.

"I’m hoping that Washington makes the right decision and does the best for my brother, but my expectations are pretty low at this point," he said. 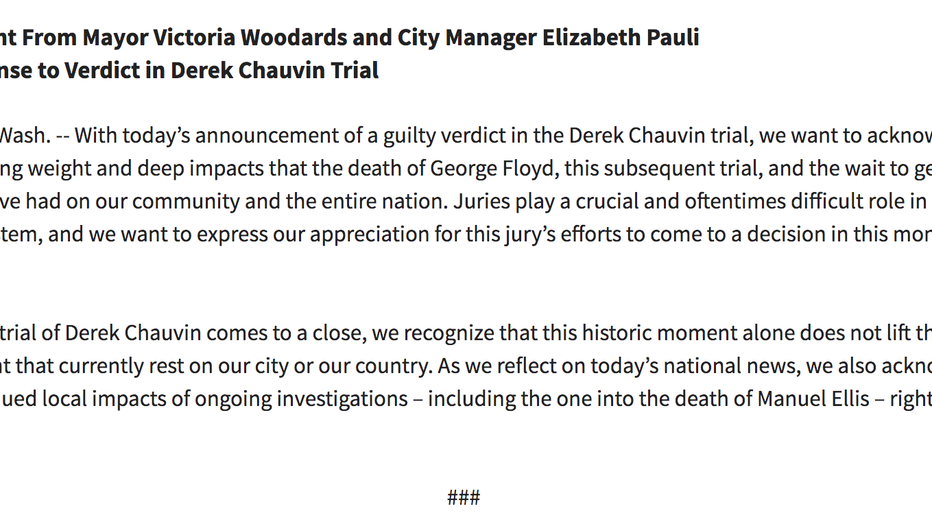 Q13 News reached out to the State Attorney General’s Office for any updates in the investigation. Officials with the office said there is no new information to be released.

On Tuesday, the City of Tacoma released a statement addressing the Derek Chauvin verdict. The city mentioned the Manuel Ellis investigation in its statement.