SEATTLE-- "It's the difference between laying in bed crying and getting up and going kayaking," says Micki Forrester.

She was at a small rally Tuesday outside the University of Washington Medical Center. It was one of four rallies statewide -- and many more across the country -- to raise awareness of the difficulties patients with chronic debilitating pain are dealing with now that the U.S. Centers For Disease Control and Prevention guidelines on prescribing pain meds are causing doctors to scale down or eliminate opioid medications that people like her say they need to function. 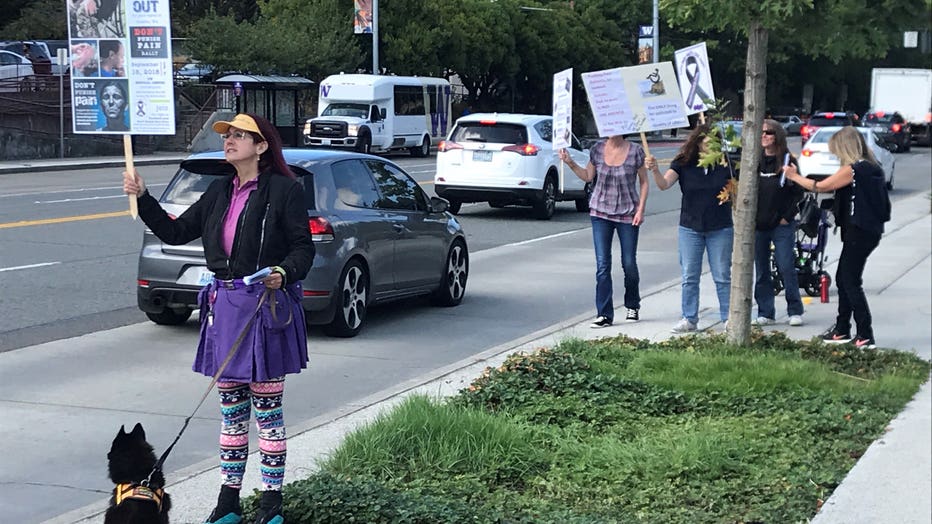 "The CDC has never seen my medical records, they have never examined me. They have no right to change my prescription," says Forrester, who added that she use to have a vigorous and active lifestyle before her disease showed itself in 2007. "I have to be drug tested every month to prove that I'm not taking heroin, ecstasy and all these other drugs I've never even heard of."

Right now, Forrester spends her days in and out of a wheelchair. She suffers from a nervous system disorder called Complex Region Pain Syndrome. She's been in chronic pain because her brain reads pain signals from nerves that think she's injured. Her dog, Pip, is by her side at all times to let her know when she's about to have an episode of uncontrollable convulsions.

Forrester and her husband would love to do more RVing around the country-- but she can no longer get a three-month prescription for her pain. Now she has to make sure she's in Washington state every month to renew her prescription. If she goes to another doctor in another state, she's afraid she'll end up on a watch list of patients that are "shopping doctors" to obtain pain medicine.

"We are not criminals, we're just in pain," she says.

Forrester says she understands the new CDC guidelines came about from the national health crisis that has been emerging from the historic over-prescribing of pain medications. CDC numbers show that more than 350,000 Americans died from prescription and illegal opioids between 2009 and 2016. But, Forrester says the new 2016 guidelines are too strict and put bureaucrats between her and her doctor.

Q13 News reached out to hospitals, physician groups and pain clinics all over the region and no physician was available for comment Tuesday.

A group called the Alliance for the Treatment of Intractable Pain say opioid prescriptions are at a 10-year low, but opioid deaths are at a 10-year high. That's why people at this rally say they're not the problem and should not be punished just for being in pain.

"I have had 11 back surgeries," says Maria Higginbotham, holding a plastic sandwich bag of nuts and screws that surgeons have removed from along her spine over the years.

"There's three times that much still in there," says the Gig Harbor woman, who used to be a bank branch manager. She has a hereditary degenerative condition where the bones in her spine are crumbling away and doctors built a metal cage around her spine.

Higginbotham says her pain is nearly constant. And while her doctor has tapered down her meds to 40 percent of where they were, she's afraid new state regulations that might come in the next year will make her pain meds to be tapered off even more.

"A lot of people want to be out here," says Higginbotham, who was diagnosed more than a decade ago, "but some of them are in so much pain they can't even get out of bed. I'm one of those, but I forced myself -- I dragged myself to be here."

The hope at this rally and others across the country during Pain Awareness Month happening now is to get people to contact their state and federal legislators and the CDC to roll back some of the harsh restrictions people in chronic pain are enduring.

"It's a horrendous life," says Higginbotham, "there's no joy left in it."