Andrew Yang shared support for Joe Biden during the 2020 DNC

“You might know me as the guy who ran for president talking about MATH and the future. Unfortunately for all of us, that future is now. The pandemic has accelerated everything,” Yang said.

Yang’s outsider presidential campaign was marked by a buzzy online following and a platform to give Americans a universal basic income.

While Yang was able to secure such celebrity endorsements as Dave Chappelle and Donald Glover, now he hopes to transfer that support to the former vice president.

Similar to a theme seen over the previous three days of the convention, Yang attempted to reach over the other side of the aisle, expressing sympathy for disgruntled Trump supporters while echoing the sentiment that the current political system is broken.

“We are in a deep, dark hole, and we need leaders who will help dig us out. I know many politicians promise and then fail to deliver. Back in 2016, if you voted for Trump, or didn’t vote at all, I understand. Many of us have gotten tired
of our leaders seeming far removed from our everyday lives. We despair that our government will ever rise to the challenges of our time,” Yang said. 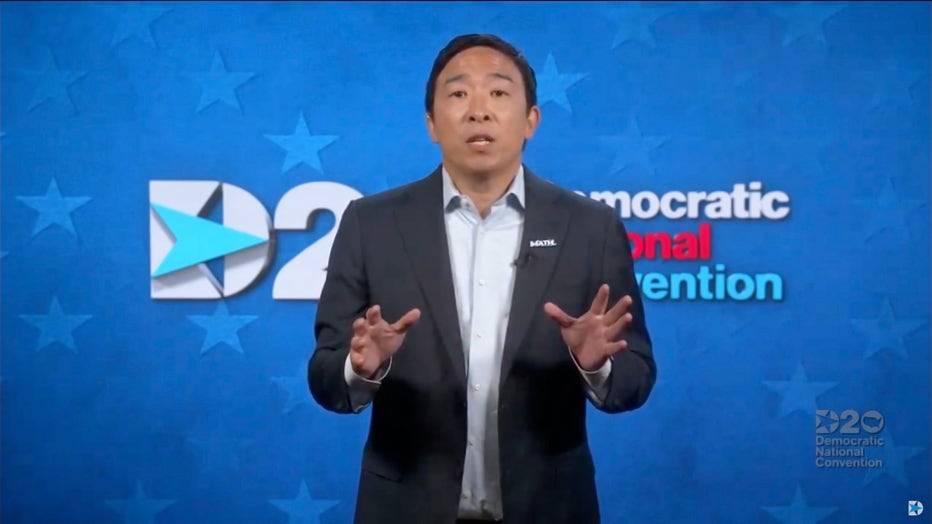 MILWAUKEE, WI - AUGUST 20: In this screenshot from the DNCC’s livestream of the 2020 Democratic National Convention, businessman Andrew Yang addresses the virtual convention on August 20, 2020. The convention, which was once expected to draw 50,000 p

“But we must give this country a chance to recover—and recovery is only possible with a change of leadership and new ideas. Bold and innovative policies that will get help into your hands in the midst of this crisis are possible—but we need your help to turn the page for our country in 75 days,” Yang said.

Biden's Democratic Party has sought this week to put forward a cohesive vision of values and policy priorities, highlighting efforts to combat climate change, tighten gun laws and embrace a humane immigration policy. They have drawn a sharp contrast with Trump's policies and personality, portraying him as cruel, self-centered and woefully unprepared to manage virtually any of the nation’s mounting crises and policy challenges.

RELATED: Colin Powell says Joe Biden 'will stand with our friends and stand up to our adversaries' in DNC speech

Biden’s call for unity comes as some strategists worry that Democrats cannot retake the White House simply by tearing Trump down; Biden needs to give his sprawling coalition something to vote for. That’s easier said than done in a modern Democratic Party made up of disparate factions that span generations, race and ideology.

For that reason, Thursday’s program, like much of the convention, emphasized Biden’s personal values like decency, honesty and empathy more than any single policy proposal or achievement.