A recent post by a local high school student has sparked outrage.

ISSAQUAH, Wash. -- The Issaquah School District is investigating after a racist post involving two of its students spread on social media. 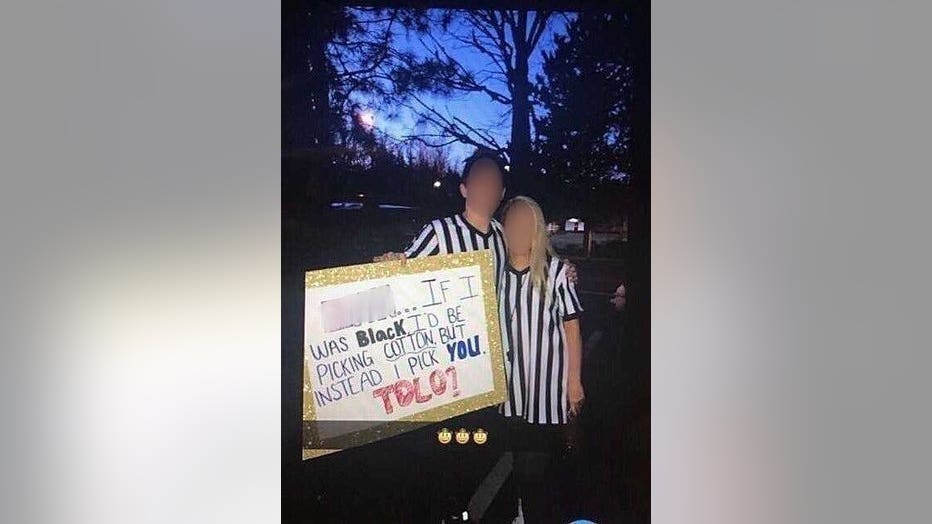 The post -- initially made on Snapchat -- includes a photo of a high school boy and girl holding a sign about a "Tolo" dance, a dance in which a girl traditionally asks a boy to accompany her to the dance.

"If I was black I'd be picking cotton, but instead I pick you. Tolo?"

The poster has caused a big stir online and has been viewed thousands of times. Q13 has blurred the faces of the students involved because they are minors.

The Issaquah School District has responded to the post with the following statement:

Over the weekend it was brought to the Issaquah School Board’s attention that there was a racially-insensitive post circulating on social media that involved students at Issaquah High School. The Board wants to publicly express our disappointment and to affirm that every student in our district deserves to attend a school environment free from racism. While we have worked tirelessly over the past two years to adopt a racial equity policy that includes fostering cultural competency in our students, we know that this will require sustained focus and commitment. This unfortunate incident will provide an opportunity to deepen our conversation on both creating an educational experience free from racism and appropriate use of social media. We know that our District leadership is equally committed to the academic and social-emotional well-being of each and every student in our District.

School officials aren't the only ones speaking out about the racially insensitive post.

The Seattle-King County NAACP and Seahawks wide receiver Doug Baldwin have each weighed in on the issue.

Baldwin, meanwhile, took to Twitter to voice his disappointment.

"I am saddened that this idea was thought of and executed without intervention. Racism is not just taught, it is encouraged through its tolerance. Let’s take this as a reminder not only to be more empathetic but to hold each other more accountable," he said.