Many residents across Western Washington are dealing with a smelly mess as trash piles up. Union workers with Republic are honoring a picket line that was extended by crews from out of state in California.

NORTH BEND, Wash. - Trash is piling up across western Washington after a temporary work stoppage.

Local union workers with Republic Services are honoring a picket line that was extended by crews from out of state in California. It’s causing widespread disruptions across various local cities that include Seattle, Bellevue, Lynnwood, Kent and North Bend.

North Bend resident Doreen Currie on Thursday had some trash to air out.

"We are a hot smelly mess, I’ve had to store really stinky trash in my garage," Currie said.

First, it was the snow and then the strike that forced customers to hoard trash for nearly four weeks.

"I never thought garbage was the first thing I would have thought of first thing in the morning every day, and the last thing I think about every night," Currie said.

Many people in North Bend rushed to Torguson Park on Thursday to dispose of their trash.

"Haven’t seen anything like this before, it’s a ton," Casey O’Brien said. 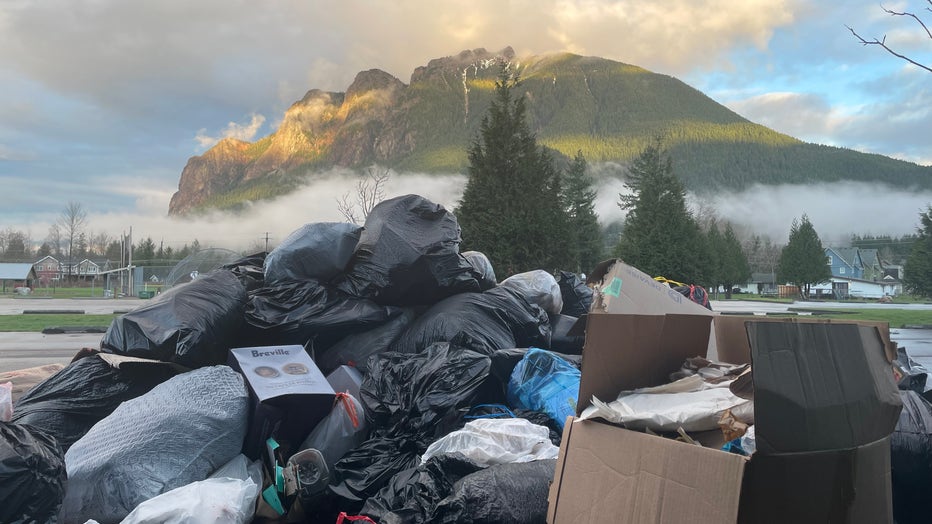 That exercise is something Currie knows all too well.

"Will they come please?" Currie said.

That is the question still up in the air. FOX 13 reached out to Republic and the union for answers.

"Republic Services is experiencing a temporary work stoppage at our Seattle, Bellevue, Kent and Lynnwood locations. This is related to a labor issue in California that has nothing to do with any Washington employees.  We are taking the steps necessary to minimize service disruptions, and we thank our customers for their patience and understanding as we work to resolve this temporary issue.  We will provide more details as soon as they become available."

Meanwhile, Teamsters Local Union No. 117 says their union members are not the ones striking.

"These are striking sanitation workers from Teamsters Local 542 who have extended picket lines to the Northwest. Our members have a contractual right to honor those picket lines by choosing not to cross and so far 100% of Local 117 members have exercised that right."

As for drop off on Friday, the city of North Bend says Turguson Park will be open from 9 a.m. to 3 p.m. for customers to drop off trash. The city says they are sending public works crews to pick up waste from those who are disabled, elderly or in COVID isolation. Those people can call 425-736-1433 for assistance.

Cities like North Bend and Kent have also asked for bill adjustments and reimbursements from Republic. An answer is pending on those requests