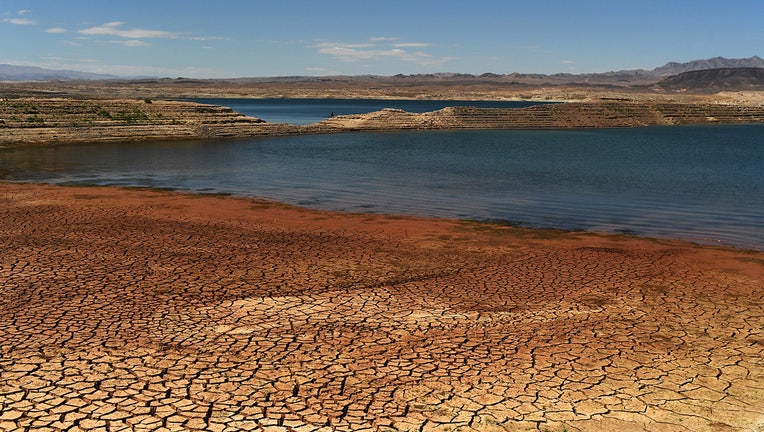 A man walks on a finger of exposed land at Lake Mead reservoir during the drought on July 9, 2022 in Boulder City, Nevada. (Photo by RJ Sangosti/MediaNews Group/The Denver Post via Getty Images)

SALT LAKE CITY - Banks along parts of the Colorado River where water once streamed are now just caked mud and rock as climate change makes the Western U.S. hotter and drier.

More than two decades of drought have done little to deter the region from diverting more water than flows through it, depleting key reservoirs to levels that now jeopardize water delivery and hydropower production.

Cities and farms in seven U.S. states are bracing for cuts this week as officials stare down a deadline to propose unprecedented reductions to their use of the water, setting up what’s expected to be the most consequential week for Colorado River policy in years.

The U.S. Bureau of Reclamation in June told the states — Arizona, California, Colorado, Nevada, New Mexico, Utah and Wyoming — to determine how to use at least 15% less water next year, or have restrictions imposed on them. The bureau is also expected to publish hydrology projections that will trigger additional cuts already agreed to.

"The challenges we are seeing today are unlike anything we have seen in our history," Camille Touton, the bureau’s commissioner, said at a U.S. Senate hearing.

Tensions over the extent of the cuts and how to spread them equitably have flared, with states pointing fingers and stubbornly clinging to their water rights despite the looming crisis.

"It’s not fun sitting around a table figuring out who is going to sacrifice and how much," said Bill Hasencamp, the Colorado River resources manager at Metropolitan Water District, which provides water to most of Southern California.

Representatives from the seven states convened in Denver last week for last minute negotiations behind closed doors. Officials party to discussions said the most likely targets for cuts are Arizona and California farmers. Agricultural districts in those states are asking to be paid generously to bear that burden.

But the tentative agreements fall short of what the Bureau of Reclamation has demanded and state officials say they hope for more time to negotiate details.

The Colorado River cascades from the Rocky Mountains into the arid deserts of the Southwest. It’s the primary water supply for 40 million people. About 70% of its water goes toward irrigation, sustaining a $15 billion-a-year agricultural industry that supplies 90% of the United States’ winter vegetables. 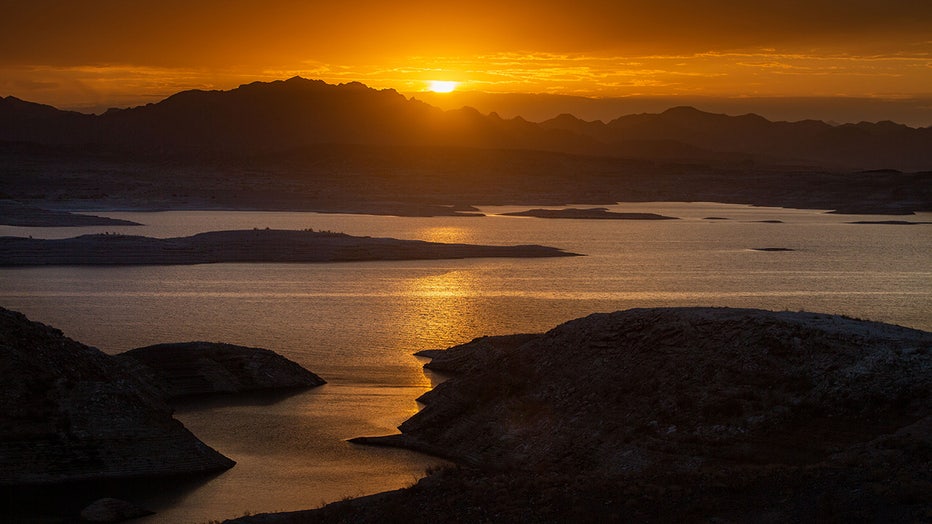 Sunrise and clouds over Lake Mead, the country's largest man-made water reservoir, formed by Hoover Dam on the Colorado River in the Southwestern United States, which has dropped 2 inches every day since February (26 feet in one year), are viewed as

Water from the river is divided among Mexico and the seven U.S. states under a series of agreements that date back a century, to a time when more flowed.

But climate change has transformed the river's hydrology, providing less snowmelt and causing hotter temperatures and more evaporation. As the river yielded less water, the states agreed to cuts tied to the levels of reservoirs that store its water.

Last year, federal officials for the first time declared a water shortage, triggering cuts to Nevada, Arizona and Mexico’s share of the river to help prevent the two largest reservoirs — Lake Powell and Lake Mead — from dropping low enough to threaten hydropower production and stop water from flowing through their dams.

The proposals for supplemental cuts due this week have inflamed disagreement between upper basin states — Colorado, New Mexico, Utah and Wyoming — and lower basin states — Arizona, California and Nevada — over how to spread the pain.

The lower basin states use most of the water and have thus far shouldered most of the cuts. The upper basin states have historically not used their full allocations but want to maintain water rights to plan for population growth.

Gene Shawcroft, the chairman of Utah’s Colorado River Authority, believes the lower basin states should take most of the cuts because they use most of the water and their full allocations.

He said it was his job to protect Utah’s allocation for growth projected for decades ahead: "The direction we’ve been given as water purveyors is to make sure we have water for the future." 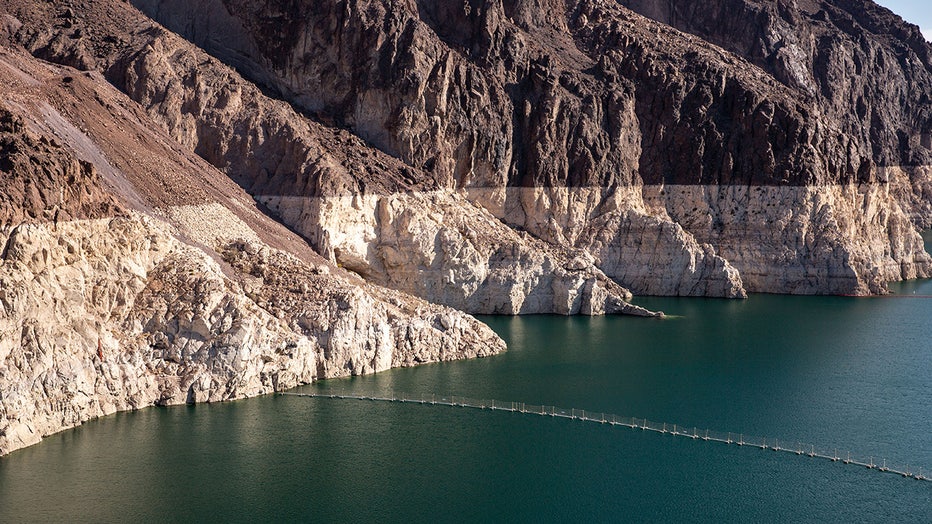 A bathtub ring watermark at Hoover Dam/Lake Mead, the country's largest man-made water reservoir, formed by the dam on the Colorado River in the Southwestern United States, has dropped 2 inches every day since February (26 feet in one year), is viewe

In a letter last month, representatives from the upper basin states proposed a five-point conservation plan they said would save water, but argued most cuts needed to come from the lower basin. The plan didn’t commit to any numbers.

"The focus is getting the tools in place and working with water users to get as much as we can rather than projecting a water number," Chuck Cullom, the executive director of the Upper Colorado River Commission, told The Associated Press.

That position, however, is unsatisfactory to many in lower basin states already facing cuts.

"It’s going to come to a head particularly if the upper basin states continue their negotiating position, saying, ‘We’re not making any cuts,’" said Bruce Babbitt, who served as Interior secretary from 2003-2011.

Lower basin states have yet to go public with plans to contribute, but officials said last week that the states' tentative proposal under discussion fell slightly short of the federal government’s request to cut 2 to 4 million acre-feet.

An acre-foot of water is enough to serve 2-3 households annually.

Hasencamp, the Metropolitan Water District’s Colorado River resource manager, said all the districts in California that draw from the river had agreed to contribute water or money to the plan, pending approval by their respective boards. Water districts, in particular Imperial Irrigation District, have been adamant that any voluntary cut must not curtail their high priority water rights.

Southern California cities will likely provide money that could fund fallowing farmland in places like Imperial County and water managers are considering leaving water they’ve stored in Lake Mead as part of their contribution.

Arizona will probably be hit hard with reductions. The state over the past few years shouldered many of the cuts. With its growing population and robust agricultural industry, it has less wiggle room than its neighbors to take on more, said Arizona Department of Water Resources Director Tom Buschatzke. Some Native American tribes in Arizona have also contributed to propping up Lake Mead in the past, and could play an outsized role in any new proposal.

Irrigators around Yuma, Arizona, have proposed taking 925,000 acre-feet less of Colorado River water in 2023 and leaving it in Lake Mead if they’re paid $1.4 billion, or $1,500 per acre-foot. The cost is far above the going rate, but irrigators defended their proposal as fair considering the cost to grow crops and get them to market.

Wade Noble, the coordinator for a coalition that represents Yuma water rights holders, said it was the only proposal put forth publicly that includes actual cuts, rather than theoretical cuts to what users are allocated on paper.

Some of the compensation-for-conservation funds could come from a $4 billion in drought funding included in the Inflation Reduction Act under consideration in Washington, U.S. Sen. Kyrsten Sinema of Arizona told the AP.

Sinema acknowledged that paying farmers to conserve is not a long-term solution: "In the short-term, however, in order to meet our day-to-day needs and year-to-year needs, ensuring that we’re creating financial incentives for non-use will help us get through," she said.

Babbitt agreed that money in the legislation will not "miraculously solve the problem" and said prices for water must be reasonable to avoid gouging because most water users will take be impacted.

"There’s no way that these cuts can all be paid for at a premium price for years and years," he said.