SEATTLE -- The group slated to bring hockey to Seattle -- and maybe return the NBA -- has released new renderings of a what a remodeled KeyArena will look like.

On Tuesday, the Oak View Group and NHL Seattle announced general contractor Skanska-Hunt  would lead the redevelopment of the Seattle Center Arena.  OVG says the redevelopment will be the "largest private investment" in the history of the Pacific Northwest when it comes to sports and entertainment.

Redevelopment is expected to cost around $700 million. OVG hopes to start construction this fall and have it completed by October 2020.

"Visitors for the sports and entertainment events are going to be treated with a venue that not only honors the history of the arena, but also provides the latest in arena and fan engagement technology," said Tod Leiweke, the President and CEO of Seattle Hockey Partners.

That timeline is subject to final approvals by the city of Seattle. It may also fall in line with the approvals for an expansion NHL franchise, which could come from the league sometime in the fall.

Skansska- Hunt has worked on other entertainment venues including MetLife Stadium, University of Portland Beauchamp Recreation  Center and the University of Kentucky Commonwealth Stadium.

The redeveloped arena is expected to hold over 140 events per year.

Leiweke said there was also an additional 50,000 square feet added for storage and a premium club space was added at the top of the building with a view of the Space Needle.

"That building you see today is not the building we designed a year ago," Leiweke said, pointing at a rendering of the new arena. "We wanted the NBA and the NHL to be able to come into this building and do a couple of things ... we wanted capacity that would ultimately make sure we meet standards the NBA and NHL expect us to hit but we wanted amenities that allowed the NHL and NBA to be top third within both of the leagues as to the revenue they could generate to make the building work for both the NHL and NBA."

As part of Tuesday's announcement, the team in charge of the renovation unveiled some of the ways construction will be done. The new building will have a capacity of 17,400 for hockey and 18,600 for basketball.

The project is somewhat limited because the KeyArena roof has received historical landmark status and cannot be touched during construction.

The construction plan calls for the floor of the building to be dropped 15 feet from its current depth and expanded outward to create the amount of square footage needed to construct a modern arena with all the needed amenities.

Tim Romani, CEO of CAA ICON, the project manager for the arena redevelopment, said the fact that an entirely new arena is being built underneath the roof raises costs but also makes the process more straightforward than if they were trying to save parts of the existing building aside from the roof.

"It's complicated, but it's simpler when we're not trying to keep other pieces," Romani said. 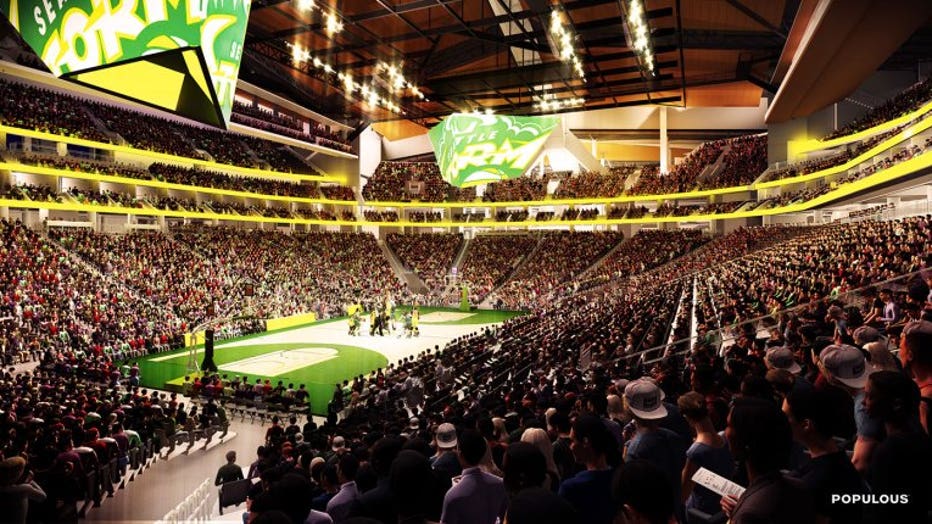 Renderings of Key Arena. From the Oak View Group.