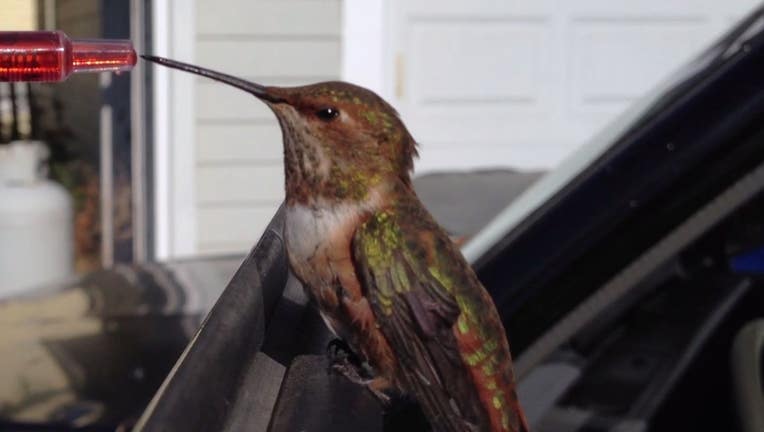 SEATTLE -- Firefighters perform lifesaving acts as part of their job.  But one local firefighter went above and beyond the call of duty for one tiny little creature.

Andy Reilly says he was headed out from the firehouse on a call early Tuesday morning.

“I saw something on the floor that I first thought was a giant moth,” he wrote on Facebook.  “On closer inspection it turned out to be a humming bird.”

Reilly says the little bird moved when he touched it but it seemed otherwise completely stunned.

“The doors of the bay had been closed for hours,” he wrote.  “It must have gotten exhausted flying around inside.”

So when he arrived back from the call he says he made a little nest out of a clean rag and he attempted to feed it some sugar water without much luck.

“I took it home this morning and picked up some hummingbird food on the way,” he wrote.  “I'd read on the internet that if they get that tired and cold they will almost hibernate.”

So Reilly says he put the bird on the dash of his pickup truck with the door open since that spot was already warm from the sun.

“After about 10 minutes of being in the sun it started breathing normally and waking up,” he wrote. “ I fed it some food from a dropper.”

After three little feedings over 15 minutes the little guy suddenly flew to the top of the door jam.

“I kept feeding it every few minutes and it would sleep in between,” wrote Reilly.  “Finally it flew off into the apple tree, and then to parts unknown.”