'It's on the boat!' shark lands on New Zealand fishing boat

A group of people on a fishing charter off Whitianga, New Zealand, were stunned when a large mako shark leaped out of the water and landed on the front of the boat, video uploaded on Nov. 6 shows. (Credit: Churchys Charters NZ via Storyful)

"We’re gonna need a bigger boat," is probably what these people were thinking when a shark literally landed on their vessel during a fishing excursion in New Zealand.

Ryan Churches, owner of Churchys Charters NZ, was taking a group of people to search for kingfish off the coast of Whitianga, New Zealand, when all of a sudden, a large mako shark leaped out of the water and landed on the front end of the boat.

Video recorded on Nov. 6 shows the starboard side of the boat as an unknown individual is seen fishing when suddenly, loud banging can be heard in the background. The recording device pans toward the front of the boat, showing a large shark flopping about on top of the vessel.

Churches said that after being hooked, the shark decided to leap out of the water as a sort of "aerial display," which landed the creature in their boat.

"It was crazy. We were all watching the rod and the line was going out to the side of the boat and it changed direction suddenly... it just happened to jump at the same time and we got a hell of a fright," Churches told The New Zealand Herald. 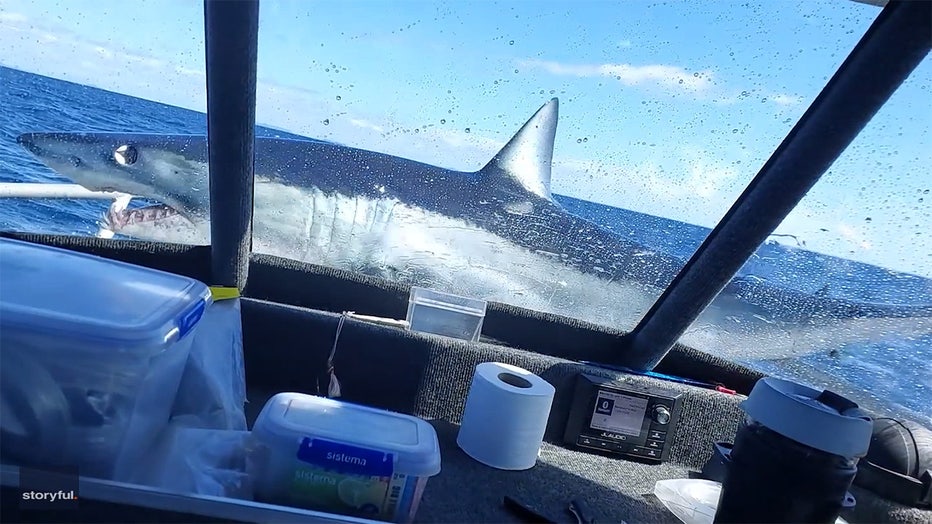 Freeze frame from video after a large mako shark landed on a fishing boat off the coast of Whitianga, New Zealand. (Churchys Charters NZ via Storyful)

The shark managed to wriggle itself off the front end of the boat and back into the ocean, the Herald reported.

"He got away safe. There’s nothing much we could do. We can’t go up the front to go near it because they go absolutely bonkers," Churches said.

Fortunately, no one was injured since the action was contained to the front end of the boat, but some people did walk away with a very interesting fishing story.

The mako shark, also known as the shortfin mako shark, can grow up to lengths of 12 feet and can weigh as much as 1,200 pounds, according to Oceana.org.

They are the fastest shark species and one of the fastest fish on the planet. Not only are they fast, but they are also known for their incredible leaping ability and are often seen leaping out of the water at great heights while hunting.

This story was reported from Los Angeles. Storyful contributed to this report.