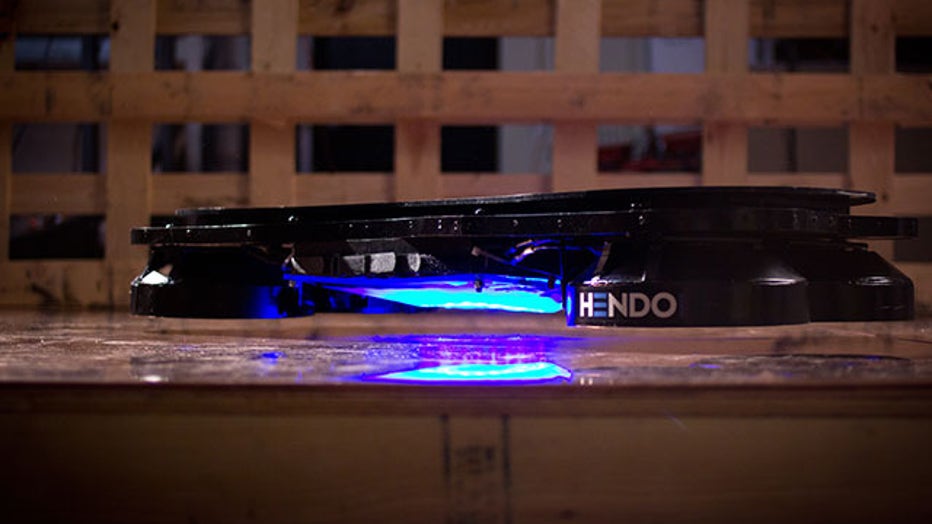 (CNN) -- If you're looking for that cool gift to get your tech-savvy significant other this Christmas, here's a pretty attractive contender: a hoverboard.

Think, the flying skateboard in "Back to the Future II." And then realize, Hey, this is the future. After all, 2015 is the year Marty McFly went to the future.

We present: the Hendo Hoverboard. The latest in man's eternal quest to realize a cherished childhood dream.

Remember the scene from "Back to the Future II" where Marty McFly escapes a pack of bullies on a hoverboard?

What looked like a cool movie prop in 1989 is now a reality, thanks to a small California company, Arx Pax. But there's a catch: it only hovers over certain surfaces because it uses magnets.

Developers Greg and Jill Henderson call their project the Hendo Hover. The board levitates by generating a magnetic field over a copper surface using four circular hover engines.

Think, maglev (magnetic levitation) trains. It's kind of like the same concept. Instead of wheels, the powerful magnets repulse the ground surface by creating a magnetic field.

In the case of the Hendo, it will float about an inch from the ground surface.

Of course, the "Back to the Future" hoverboard has captured the imagination of lots of folks over the last quarter century.

A couple of years ago, French scientists came up with something called the MagSurf. It uses quantum levitation to make it work. Basically, it requires a supercooled and superconductive material to interact with a magnetic field.

Or, there's the less scientific approach that French jet ski champion Franky Zapata took. His answer was a water-powered hoverboard that propelled you 20 feet into the air.

Still, the Hendo Hover has the Internet all atwitter. The Kickstarter campaign for it is well on the way to its $250,000 goal. The first 10 people with $10,000 were able to reserve one. Sorry folks, no more are left this time around. One thing is for certain, the buzz has to be good for business.

Now, scientists, get working on a jetpack!