OLYMPIA, Wash. – History was made in Olympia Monday. For the first time in four decades, members of the Electoral College broke ranks.

Four of our state's 12 electoral members decided not to cast a vote for Democrat Hillary Clinton, even though she carried Washington state in the November election. One of the faithless electors said he had to vote his conscience, even if it means losing some money to a state fine.

Demonstrators lined up on the Capitol steps hoping to sway Washington state’s electoral voters to break their promise and find a way to deny President-elect Donald Trump from taking the White House by preventing him from reaching the minimum 270 Electoral College votes he needed nationwide.

“This is only the second protest I’ve ever done in my life,” said  Deborah Kohler.

Kohler said she traveled to Olympia from Vashon Island, hoping to convince electors to think twice before they voted.

“How do I explain to my daughters, children, grandchildren that I did nothing?” she asked.

Like most states, Washington's electoral votes are winner take all. All 12 of the electors are supposed to honor their pledge to vote for the winner of the November vote in the state --  Clinton and her running mate, Tim Kaine.

“This was a very difficult decision made this year,” Gov. Jay Inslee told the Electoral College. “There’s great angst abroad in the land.”

But several voters announced they planned to stray from tradition. Peter Chiafalo, co-founder of a movement called the Hamilton Electors, planned to cast his ballot for someone else in a last-ditch effort to thwart a Trump presidency.

“We did everything we could do to educate as many electors as possible,” said Chiafalo. “The end decision for every elector is up to them.”

In the end, all but four electors voted for Clinton. Three voted for former Secretary of State and Republican Colin Powell, while a fourth cast a ballot for a Native American elder named Faith Spotted Eagle.

Chiafalo voted for Powell and he said he’s ready to pay a fine of up to $1,000 if the state decides to enforce the law on faithless electors.

“I would actually be surprised at this point if they did,” he said.

By the end of the day, Trump won the number of electoral votes needed to become president. He will be inaugurated the 45th president of the United States on Jan. 20.

Varisha Kahn said she cast her ballot for Clinton. She hopes voters now know more about the Electoral College system and use that knowledge to become more engaged in the political system.

“When you get involved and when you stand up for your rights, you can have an impact,” she said. “That goes for so many people that have been impacted by this election. It’s our responsibility now going forward to make sure we do everything we possibly can to make sure America is great.”

Several of our state’s Electoral College voters said they now plan to advocate for the abolishing the system they were part of on Monday, saying it’s time for the popular vote to decide who becomes U.S. president.

Here are the certified Electoral College votes in Washington state, released by the secretary of state's office on Monday. 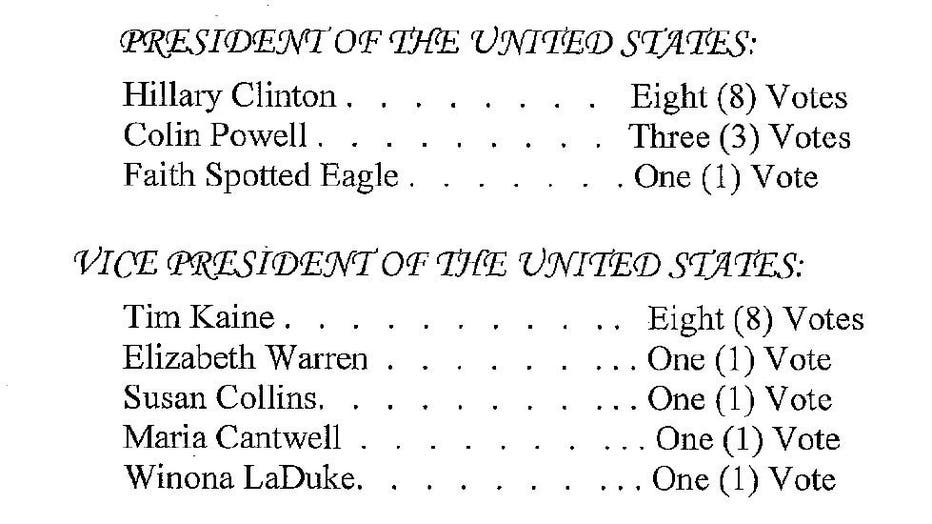