It's located at Central Washington State Fair Park in Yakima.

YAKIMA, Wash. - Just in time for the asparagus harvest that will employ large numbers of farmworkers, the federal government has opened a mass COVID-19 vaccination center in Yakima in the center of Washington state’s agricultural region.

The state’s first federal mass vaccination center is located at the Central Washington State Fair Park. It opened Wednesday and will administer close to 1,200 doses of vaccine per day, according to the Federal Emergency Management Agency, which operates the site along with state and local officials.

Vaccine will come there directly from the federal government rather than from the state’s weekly allocation. The additional doses will help vaccinate more Washingtonians, including those in rural and agricultural communities that have been particularly hard-hit during the COVID-19 pandemic.

The COVID-19 pandemic has hit Yakima County hard, with high infection and hospitalization rates compared to the rest of Washington. People from racial and ethnic minority groups have accounted for approximately 50% of the county’s COVID-19 cases.

"We are so appreciative to FEMA and our other federal partners for working with the state to make significant additional resources available to the people of the Yakima Valley," Washington Gov. Jay Inslee said in a written statement. 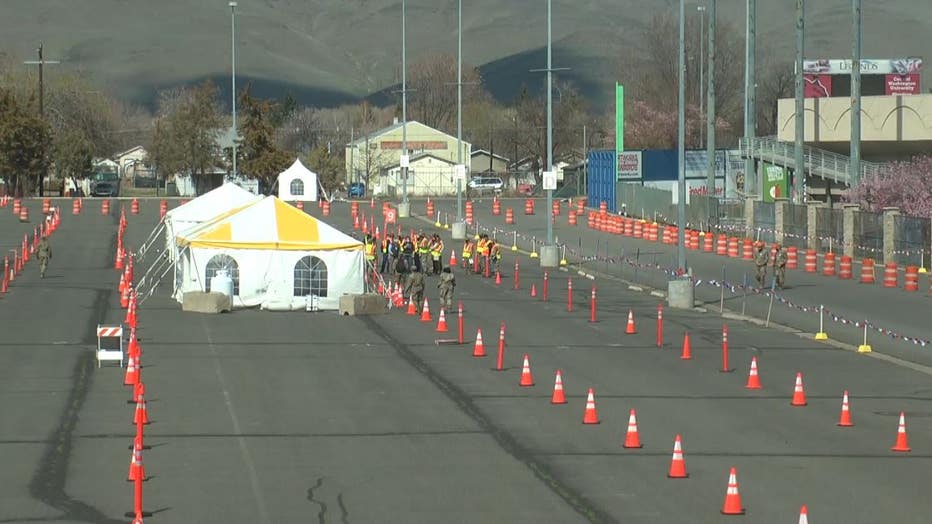 As of Wednesday, about 5 million of the state’s more than 7.6 million residents will be eligible for a COVID-19 vaccine. The latest tier expansion was announced by Inslee earlier this month. Starting Wednesday, eligibility extended to those those 16 and older with two or more comorbidities, anyone between the ages of 60 and 64, and workers age 16 and older who work in restaurants, manufacturing and construction.

The state continues to operate four mass vaccination centers in Kennewick, Ridgefield, Spokane and Wenatchee, which since Jan. 26 have administered almost 154,000 doses, the Washington state Department of Health said.

Of those four sites only Ridgefield, near Vancouver, is west of the Cascade Range. But there are multiple other mass vaccination sites set up around the Interstate-5 corridor that the Department of Health is supporting by providing vaccine every week, the agency said, including Lumen Field in Seattle.

Seattle Mayor Jenny Durkan said the Lumen Field site is a collaboration between the City of Seattle, First & Goal Inc., and Swedish Hospital.

The site could vaccinate 150,000 people each week, if enough vaccine is available.

"Every mass vaccination site in this state represents a significant step forward in getting Washingtonians out of this global pandemic, and the one at the Lumen Field Event Center is no exception," Inslee said.

The City of Seattle also operates two high-capacity vaccination sites in Rainier Beach and West Seattle that are currently distributing between 250-400 vaccines daily.

The federal mass vaccination center was requested by the state Department of Health and the Yakima County Health District. Yakima County and others in the state’s farm belt employ tens of thousands of migrant farmworkers each year and have been hard-hit by the coronavirus.

Officials have said the migrant farmworker community is especially vulnerable to the virus because many people work, travel and live in close quarters where the virus is more easily transmitted.

In Yakima, the mass vaccination clinic will include the fixed, drive-thru vaccination site at Central Washington State Fair Park as well as mobile vaccination units.

"This will be a tremendous boost to our vaccine equity efforts and will also reach out directly to Washingtonians who don’t have the means of transportation to a fixed vaccination site," Inslee said.