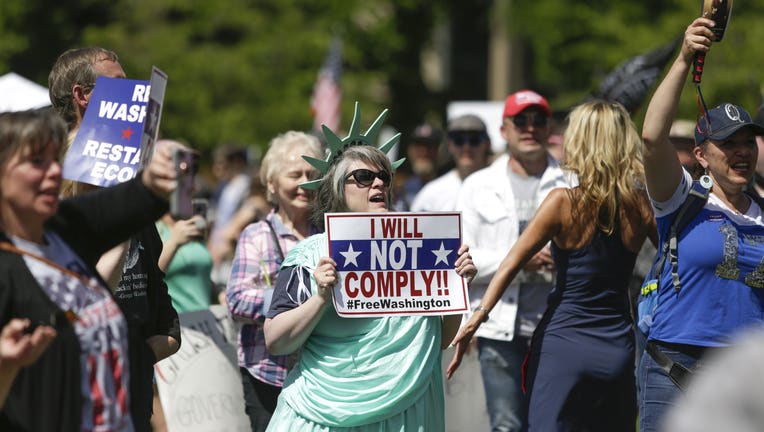 Some of the complainants who reported to the state businesses allegedly violating the order say the Facebook posts have generated threats of violence and harassment against them, The Seattle Times reported.

Two Facebook pages during the past week posted names, emails and phone numbers of state residents who had complained to the state about businesses allegedly violating Gov. Jay Inslee’s stay-at-home order. Some of the complainants say the Facebook posts have generated threats of violence and harassment against them.

One group publicizing the names, the far-right Washington Three Percenters, has promoted the stay-at-home protests and one of its leaders spoke at Saturday’s demonstration. State officials said the groups likely acquired the information through public records requests.

Saturday’s rally drew roughly 1,500 people, according to the Washington State Patrol. That was fewer than the more than 2,000 who attended a similar protest last month.

The demonstration came as Washington state health officials had reported a total of 16,674 confirmed cases of COVID-19, including 921 fatalities as of Saturday. Nationwide, more than 77,000 people have died of the virus, according to figures Saturday by the U.S. Centers for Disease Control and Prevention.

At the rally, Rep. Matt Shea, a Spokane Valley lawmaker who was suspended last year from the GOP House caucus after a House-commissioned investigation found he planned and participated in domestic terrorism, led the crowd Saturday in a chant of “Freedom is the cure.”

While some Washingtonians have vehemently objected to the state’s restrictions on workplaces and social gatherings, polls have shown most residents approve of Inslee’s handling of the pandemic.

Also this week, Seattle City Council leaders said it would stop deliberating a proposal to tax large corporations, citing a statewide coronavirus-emergency proclamation that limits what public agencies can discuss during the pandemic.

The council’s budget committee, chaired by Mosqueda, has met twice via teleconference to consider the proposal to enact a payroll tax on Amazon and other corporations with annual wage costs of more than $7 million, and a third remote meeting was scheduled for next week. But Councilmember Lisa Herbold wrote a letter to González expressing concern about compliance with the state proclamation.

The Sawant-Morales proposal makes reference to the civil emergency that Durkan and the council declared in March and includes a plan to send coronavirus-crisis relief checks to Seattle households. The proposal also includes the tax, which the council members have said could raise $500 million a year and which would not have an end date.

In interviews Thursday, González and Mosqueda said they now agree with Herbold that the council shouldn’t be considering the tax until Inslee’s proclamation expires.

Sawant decried the move, saying she was stunned and scandalized by the decision.

The virus causes mild to moderate symptoms in most patients, and the vast majority recover. But it is highly contagious and can cause severe illness and death in some patients, particularly the elderly and those with underlying health conditions.

The Divide: Republicans challenge Inslee over use of emergency power

The Divide: Republicans challenge Inslee over use of emergency power