Trump spoke from the Rose Garden as the nation sets records for confirmed cases of COVID-19, and as hospitalizations near critical levels and fatalities climb to the highest levels since the spring.

The Washington State Department of Health two weeks ago reported more than 1,000 cases in a day for the first time since mid-summer.

As of this week, more than 125,000 cases have been confirmed statewide and there have been over 2,500 reported deaths.

“We are in as dangerous a position today as we were in March,” Inslee said during a brief statewide televised address on Thursday. “We cannot wait until our hospitals’ halls are lined with gurneys waiting for rooms before we take decisive action.” 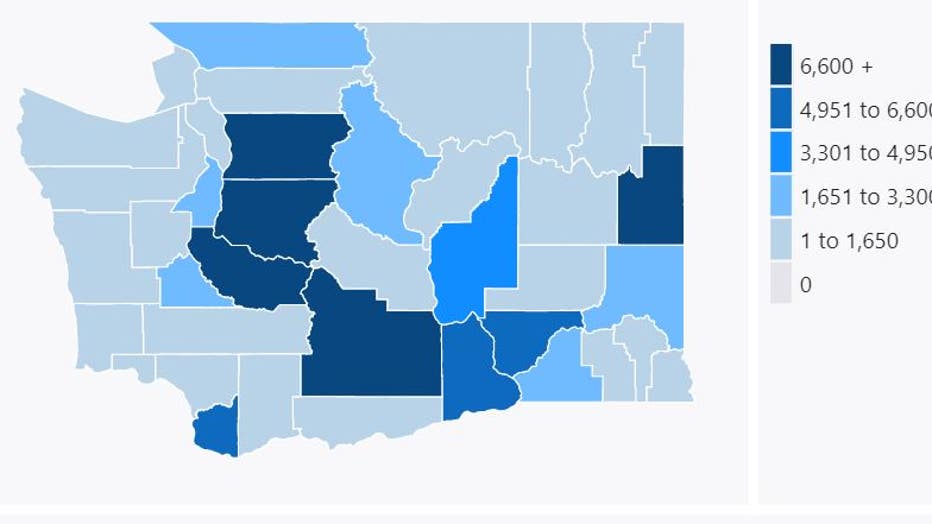 Health officials have repeatedly asked for people to be careful as we head into the holiday season.

“The collective choices each of us are making every day have an enormous impact on the spread of COVID-19. We all must re-evaluate our plans for the upcoming holidays and everyday life. As community rates go up, the risk posed by social gatherings increases as well,” said Deputy Secretary of Health for COVID-19 Response Lacy Fehrenbach. “The only way to slow the spread is for us all to recommit to the actions we know work. We have flattened our curve twice before, and it’s time to do it again.”

GET THE Q13 NEWS APP FOR CORONAVIRUS UPDATES

“We all must take immediate action if we want to avoid overwhelming our hospital systems.” said Secretary of Health John Wiesman. “And we must take action now to save lives—lives of the people we care for and love.”

Options for staying safe during Thanksgiving

“Please don’t gather with people outside your household,” the governor said. “It’s too dangerous.”

While the governor has held regular news conferences to discuss ongoing efforts against the coronavirus, the last statewide televised address Inslee gave was in April, when he updated the public on stay-at-home restrictions and warned that a return to public life would take a series of steps. The state was under a stay-at-home order from March 23 until the end of May.

Inslee said that an announcement on further measures will be made in the coming days, and will affect what people do outside of the home, but he said “what’s most urgent right now, tonight, is what we do in our own dwellings.”

“Every social gathering is just one more brick in a wall of infection,” Trudi Inslee said.

The state provided the following steps to reduce the spread of COVID-19, including:

All of the state’s 39 counties are paused in either the second or third phase of a four-stage reopening plan that began in early May to start lifting restrictions on businesses and other activities. The staggered reopening was mean to restart the economy after the state saw massive layoffs and reduction of hours across multiple industries during the state’s stay-at-home order.

While the number of applications for unemployment insurance fell last week in 29 states, new numbers released Thursday show the figure jumped the highest in Washington, with 25,201 new claims representing a nearly 72% increase from the previous week. The latest unemployment rate numbers, from September, show the rate at 7.8%. New numbers for October will be released next week.

Inslee’s remarks came just two days after state and county health officials warned of an acceleration of coronavirus cases across the state, and pleaded with the public to take the pandemic more seriously heading into the winter holidays.

On Tuesday, state health officer Kathy Lofy, joined by state and county health officials, said cases have been steadily increasing since September, but that the most dramatic increases have occurred over the past two weeks. She said cases are rising among all age groups, indicating that transmission is widespread. She and others also expressed concern about a potential surge in hospitalizations that would put a strain on hospitals.

For most, the coronavirus causes mild or moderate symptoms, such as fever and cough that clear up in two to three weeks, although long-term effects are unknown. But for some, especially older adults and people with existing health problems, it can cause more severe illness, including pneumonia and death.

Inslee said that he was optimistic that holidays in 2021 would return to normal, with the arrival of more therapeutics to treat COVID-19, as well as promising news about a vaccine.

“This is a temporary situation. We will get back to normal,” Inslee said. “The cavalry is on the way, but we need to keep people alive until it gets here.”