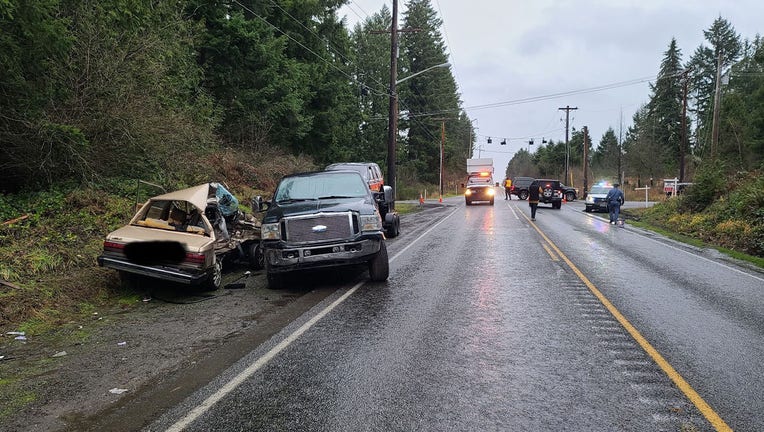 YELM, Wash. - A 30-year-old woman and 6-year-old child were killed in a 2-vehicle collision on SR 702 near Yelm Saturday afternoon.

Washington State Patrol responded to the crash around 1:30 p.m. Saturday on SR 702 and 8th Ave E. When responders arrived, they found both vehicles blocking the intersection.

WSP Trooper Ryan Burke said two passengers in one of the vehicles was air-lifted to a nearby hospital. WSP confirmed both the female driver of the car and 6-year-old child involved in the crash died.

Burke said in a tweet the tan sedan pictured was driving without a passenger side window, and in place were strips of clear tape. The driver was stopped on 8th Ave. facing north. Witnesses told WSP the driver pulled in front of the second vehicle, the pickup, traveling west.

WSP says the pickup was going near the 55 mph speed limit when it hit the car. Burke says it was possible the driver of the car couldn't see out their window, in addition to bad weather as leading factors in the cause of the crash. Both passengers in the truck were uninjured.

The collision is under investigation. WSP says the road has reopened around 4:15 p.m.

Rain and strong winds on Saturday

For Saturday, expect rain showers most of the day with strong winds. A High Wind Warning will be in effect through Saturday at the coast. Q13's Grace Lim has a look at the 7-day forecast.