KENT, Wash. — Mindy Mansfield had health insurance when she worked at a factory that made air flow vents in Cle Elum, a small town in central Washington state. It covered the pills she took for her Type 2 diabetes and the ones she needed to ease her arthritis.

But as she edged toward retirement age after nearly two decades as a machine operator, Mansfield was laid off. She moved in with her older sister in Kent, lost her medical coverage and jettisoned her arthritis medication because "it was just too expensive." 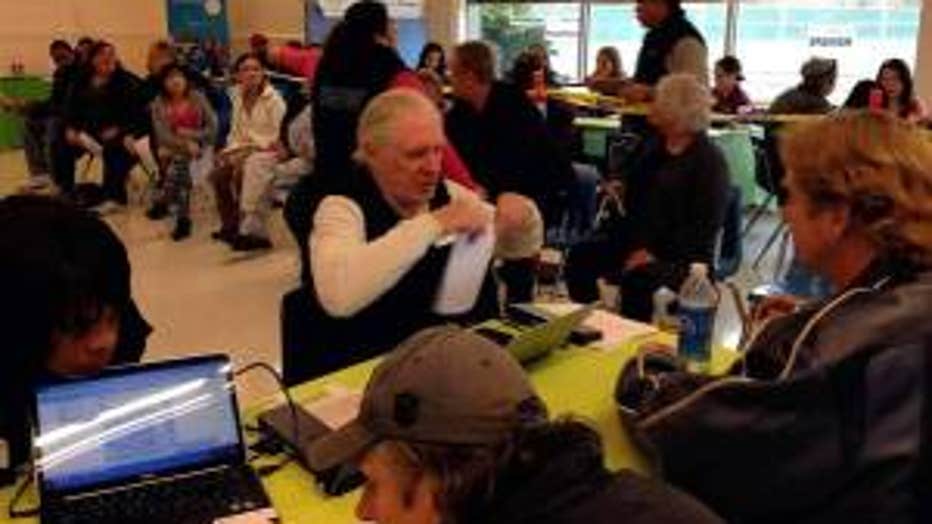 Two years of worry about whether she could stay healthy without a safety net were erased in just 20 minutes Saturday — the time it took the 62-year-old to navigate Washington's online insurance exchange with a little help from "in-person assister" Pearl Rodriguez.

Mansfield was one of 100 uninsured women and men who flocked to an aging community center here on a drizzly afternoon and signed up for insurance coverage under the Affordable Care Act, as Obamacare is formally known. They were part of the Washington Healthplanfinder's "mobile enrollment tour."

More than 55,000 people in Washington state enrolled in health coverage in October — most in Medicaid — and about 40,000 more applied for coverage, making the Evergreen State one of the brightest success stories in the rocky national rollout of the federal health law. Here in the home of online shopping giant Amazon.com, officials credit the exchange's success in part to the Pacific Northwest's high-tech bent.

Colorado enrolled just over 37,500 people in the same period. New York state — with a population nearly three times the size of Washington's — had enrolled just more than 48,000 in health plans as of Tuesday, state officials announced. Kentucky enrolled more than 32,000 in its first month. California is expected to release figures this week.

All are among the states that embraced Obamacare and crafted their own insurance exchanges rather than rely on the federal site, which has been riddled with breakdowns.

In addition to the enrollment tour, which brought a long, white trailer filled with workstations, laptops and enrollment assisters to cities throughout the state, Washington Healthplanfinder has wooed young and healthy residents with android and iPhone apps and an appearance Tuesday at the University of Washington by Seattle's own Chris Walla, guitarist with Death Cab for Cutie.

Early analysis puts "Washington at the top of the pack, with Kentucky doing similarly well," said Sabrina Corlette, senior research fellow at the Georgetown University Center on Health Insurance Reforms. The 14 states "that went forward with their own exchanges are head and shoulders better than the states with the federal exchanges."

The goal of Washington Healthplanfinder was to give insurance seekers a smooth online shopping experience, and many on the site's leadership team are veterans of tech startups.

Another important decision Washington insurance exchange officials made early on was to allow insurance seekers to shop for plans without having to go through the lengthy application process first. Not all state exchanges initially had the same anonymous browsing capability.

HealthCare.gov, the federal exchange used by more than half of the country, lets people see what plans are available, but "to find out the actual costs for your personal situation," the site says, "you need to apply."

"An open browsing function in hindsight is a very good idea," said Anne Gauthier, senior program director for the National Academy for State Health Policy. "They all have the same goal. Those that went in the direction of the shopper … in October came out ahead."

Guitarist Walla, who promoted the insurance exchange at the Seattle campus, is one beneficiary of the comparison-shopping capability. Yes, his indie band fills halls these days, but he is still self-employed, recently married and planning to start a family.

"There is no reasonable way without the Affordable Care Act to be able to comparison shop for the plan," he said. He told students — also known as "young invincibles" and the financial heart of the federal insurance program — "about being uninsured and how terrifying that is, and how for the first time it's a little bit better than it's ever been."

Susan McCarthy, a registered nurse who says she took early retirement because her "knees are shot," also tapped into the shopping capability. It allowed her to narrow her search to three different health plans, all of which would allow her to cut her current monthly premiums by more than half.

A week ago McCarthy showed up at a public library near Tacoma with a printout of her options in hand. Inside the library entrance was a white board offering a week's worth of events: "Duct Tape Creations"; "Stuffed Animal Sleepover"; "ACA In-Person Assister. Monday. 11/4. Sign up at the Help Desk."

But McCarthy left her appointment without enrolling in a plan because she could not find out whether the coverage she wanted allowed her to go to a doctor outside of the network and whether she could see a specialist without a referral.

"It's a real good deal," the 57-year-old said, leaning on her cane. "But with this comparison there are a lot more questions. I have to call each insurance company."

For all its success, the Washington exchange has not been without glitches. On its first day of operation, the website was shut down for five hours and then again overnight for maintenance. Pages were slow to load, or screens would freeze, said spokesman Michael Marchand.

"We had a choice," he said. "Keeping the site up and troubleshooting with everyone in it, or going into maintenance mode and taking the site off-line to find out what the issues were.... We did that in the first 48 hours. We've been stable since then."

In addition, an estimated 8,000 early applicants were notified that the price they were expecting to pay for their coverage was incorrect, because the site miscalculated the size of the tax credit they were due. The exchange has fixed the error.

And the call center, which received nearly 100,000 inquiries in its first month, was often swamped. That's why Mansfield came out Saturday to the Kent enrollment event for in-person assistance.

"I started calling on Oct. 1, and oooh, yeah," she said, "I kept getting, 'Please call back when the system is working.' At first, they took my number and said they'd call back and never did. And they were going to send me information and never did."

But on Saturday, she found all the information she needed.

Insurance seekers began showing up for enrollment help two hours before the event was to begin. They crowded into the community center and the trailer in the parking lot, clutching tax forms and immigration documents.

Mansfield and Rodriguez huddled together over a shiny new laptop in the busy trailer, setting up the older woman's account. Rodriguez led Mansfield through a series of questions, typing in the necessary information about citizenship, tax filing status, family makeup.

Mansfield pulled out a letter from the Social Security Administration to prove how much money she makes each month. Rodriguez tapped a few more keys, then looked up, smiling.

"You qualify for Washington Apple Health," she told the uninsured woman, referring to the state's expanded Medicaid program. And then she shared the best part: "At no cost."

"That's it?" Mansfield asked, relieved and incredulous that the process was so fast and easy, and the result so comforting. "Wonderful."