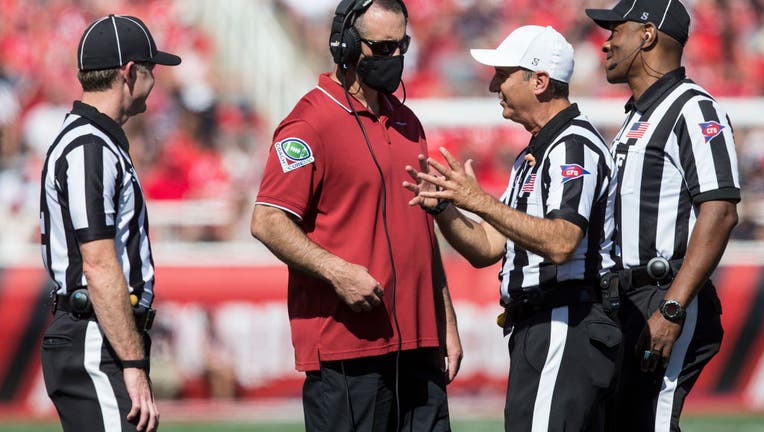 PULLMAN, Wash. - Joe Trull was disappointed that Nick Rolovich did not get a chance to coach a full season at Washington State.

Standing outside Martin Stadium before the Cougars’ game against BYU, Trull, 55, of Port Orchard, Washington, also said Rolovich’s dismissal "was the right thing to do."

Washington State fans like Trull weighed in Saturday after Rolovich was fired because of his refusal to get a COVID-19 vaccination.

"I’m curious to see how the kids handle this," Trull said. "This may be a rallying point for them. I think they are going to play hard."

Trisha Griggs, 32, of Spokane, Washington, is a 2011 graduate of Washington State. She wore a Cougars sweatshirt as she walked toward the stadium on Saturday.

"I think it’s sad for the players," Griggs said. "I think how difficult it is on players and causing such divisions among Cougar Nation.

"But I’m an alum and I still support athletics."

"He got himself fired," Blewett said. "He stood on a hill and died on it.

"He is a leader of men working for a research university. He made his own bed."

Blewett said he hoped the Cougars can keep playing at the level they have in posting three straight victories, and qualify for a bowl game.

"Two or three more wins and they get to play an extra game," Blewett said.

Fans have continued to donate money to the program, Washington State officials said this week.

The athletics department has received $3.5 million in donations in the last week following the firing of Rolovich, the school said. Those donations will go toward the new indoor practice facility, which has now surpassed its fundraising goals, the school said.

A good-sized crowd was expected at 32,900-seat Martin Stadium on Saturday, but school officials said it likely would fall short of the sellout that quarterback Jayden de Laura called for this week after Rolovich was fired.

Rolovich and four of his assistants were fired Monday for not complying with the governor’s mandate that all state employees be vaccinated against the coronavirus. Rolovich had requested a religious exemption but it was denied Monday, the state’s vaccination deadline.

He was replaced for the remainder of the season by defensive coordinator Jake Dickert, who was elevated to acting head coach.

RELATED: Nick Rolovich to file lawsuit against WSU over firing