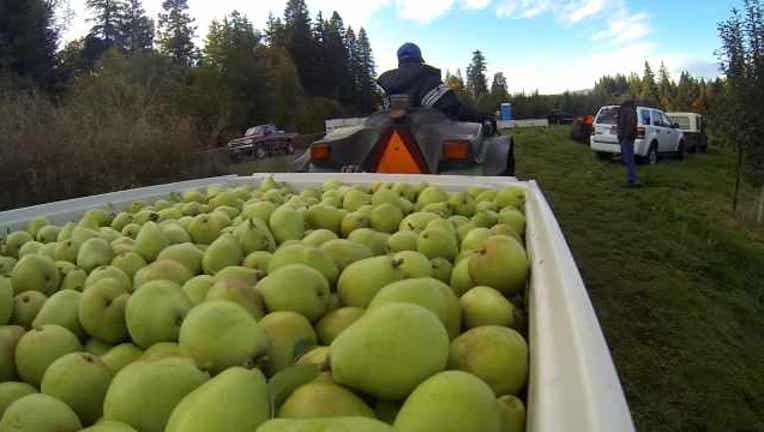 Under one tree, he says, is about $50 worth of pears that should have been picked 10 to 12 days ago.

Pear-picking season is only about 20 days long, and it's now or never. This year, McCarthy and other pear farmers in the Pacific Northwest can't hire enough workers to do the job.

On the day FOX 12 visited his orchards, there were 30 people working. He said he would have liked to have hired 90 workers that day.

He said the country is not bringing enough foreigners into this country to do agricultural work, and that he tried to hire locals for the job, but it hasn't worked out.

"All the produce in the United States is picked by Hispanic workers mostly. And there aren't enough workers any more," he said.

Neighboring grower Jennifer Euwer also said there aren't enough workers because the pear pickers who have worked for decades are getting older. They are now in their 60s, but their children aren't taking their jobs.

Instead, the sons and daughters of these migrant workers are going to pursue the American dream.

Angel Najera-Perec, 18, is about to go to college at Boise State

. He hopes to become a chemical engineer and said this is the only summer he'll spend picking pears.

Some economists report there may be food shortages and Americans will start paying more at the grocery store if orchards like the one owned by McCarthy don't find more seasonal workers to perform these agricultural jobs.