SEATTLE-TACOMA INTERNATIONAL AIRPORT -- It was an emotional homecoming for a Kirkland man who survived the typhoon in the Philippines.

Gregg Anderson was vacationing with a friend in Guiuan, the community hit first by the typhoon. Anderson’s story of survival is unbelievable. 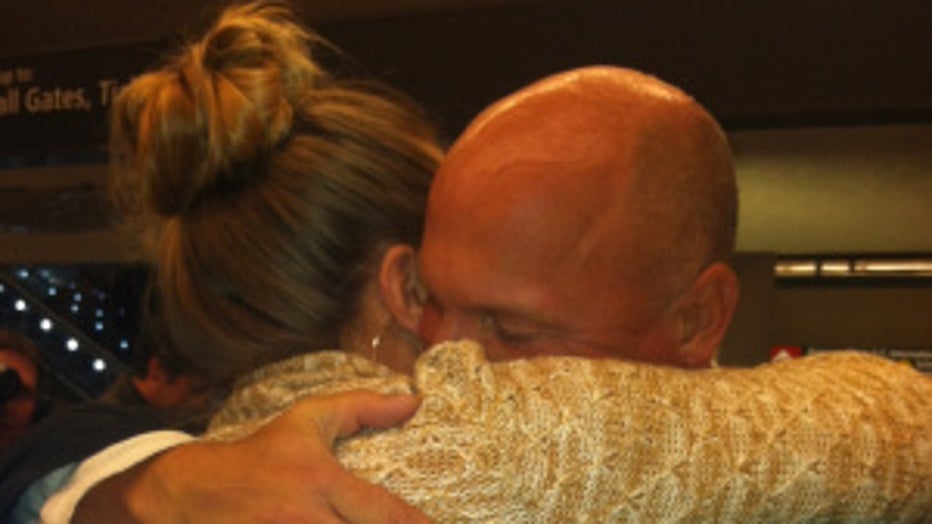 For his family members at Sea-Tac International Airport on Wednesday, first it was the jitters, then anticipation, and, finally, excitement as they saw the first glimpse of Anderson coming up the escalator.

Anderson and his friend Chad Reel, an Alaska native, arrived at Sea-Tac to a big crowd of family, friends and co-workers.

Gregg’s first impression of Guiuan was luxurious and peaceful. He said his view of the Pacific Ocean was from a beautiful villa nestled on white-sand beaches but as soon as he could take in the view, the typhoon roared in.

Anderson and Reel took cover under a concrete stairwell inside their vacation villa; the terrifying typhoon took everything.

“It was an absolute beast this thing, had a thumping sound it was like a washing machine, and it would just whap, whap and it would just flatten everything. We were in the hole as we called it, we opened up the door and we saw everything flying,” Anderson said.

In no time their shelter was gone, but they were alive and for the next five days Anderson captured home video of the devastation. They had enough food to get them through, but others were killing each other to survive.

“Three people were killed, shot fighting over food when I was there. I witnessed looting; it was crazy,” Reel said.

“It was day to day, it was traumatic; had to make the best decision you couldn’t panic because you'd get yourself in trouble,” said Anderson.

Guiuan, a community of about 47,000 people, has been almost wiped off the map.

“Utterly destroyed, everything gone, just gone. It’s like you know you took a vacuum cleaner and cleaned the entire landscape,” Anderson said.

Now he is back home with a story of a lifetime.

The homecoming was even more special because Wednesday was Anderson’s 50th birthday.