WASHINGTON -- A man who masterminded a $100 million Ponzi scheme and escaped from a federal prison in California may have fled to South America and federal officials have named his boyfriend as a person of interest in the case, according to court records reviewed by The Associated Press on Thursday.

Frederick Darren Berg was serving an 18-year prison sentence when he walked away from the federal prison camp in Atwater, California, in December 2017. 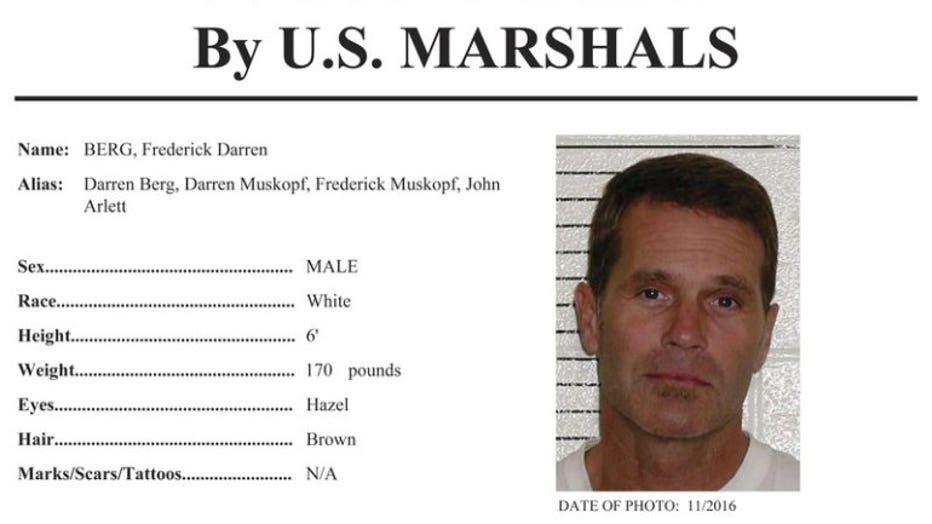 This image provided by the U.S. Marshals Service shows part of the wanted poster for Frederick Darren Berg. Federal agents believe Berg, the man who masterminded a $100 million Ponzi scheme and escaped from a federal prison in California, may have fl

Since then, investigators have been focusing their attention on his boyfriend, Darrell Ray Blankenship, a flight attendant who authorities say may have had access to a private jet and frequently traveled to Chile, according to court documents.

Earlier this week, federal agents sought a search warrant for his electronics and communication and they suspect he's been talking to Berg since his escape, the records said.

Blankenship has not been charged with a crime or formally accused of wrongdoing. He did not immediately respond to a message left Thursday at a cellphone number listed in court papers.

In a statement, the U.S. Marshals Service said Berg was "responsible for the largest fraud scheme ever prosecuted in the Western District of Washington" and has more than 10 years left on his sentence.

"While we cannot discuss an active and open investigation, we still encourage the public to report any tips or sightings to us," Deputy U.S. Marshal Michael A. Garcia said, referring tipsters to the agency's website .

A few weeks after Berg's escape — in the first three weeks of 2018 — Blankenship posted several photos that investigators believe were taken at a hotel in Rio de Janeiro, Brazil, including one that showed three men sitting on a lounge chair and one of them had the same hairline as Berg, court records said.

During that same time, Blankenship also sent a message to Berg's mother with a note that read, "hello from Rio," according to the documents. Investigators also obtained a message that Blankenship allegedly sent to a tarot card reader in February 2018 that was signed "Darrell and Darren."

Months later, deputy U.S. marshals tracked down a tipster — a mutual friend of Berg and Blankenship — who showed them Instagram messages he received from Blankenship. One of the messages said Blankenship had "just heard from Darren" and that he was fine.

Berg pleaded guilty in 2012 to wire fraud, money laundering and bankruptcy fraud charges for scamming hundreds of people. Federal prosecutors in Washington state alleged that Berg began the nearly decade-long scam in 2001 and used investors' funds to sign contracts, buy real estate and make loans, all while promising there would be profits to repay the investors.