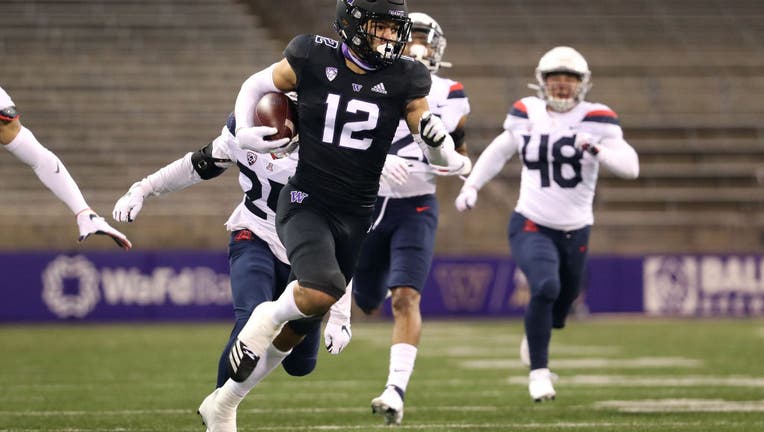 SEATTLE, WASHINGTON - NOVEMBER 21: Puka Nacua #12 of the Washington Huskies runs for a 65 yard touchdown in the first quarter against the Arizona Wildcats at Husky Stadium on November 21, 2020 in Seattle, Washington. (Photo by Abbie Parr/Getty Images

SEATTLE - Four plays into his second game as Washington’s head coach Jimmy Lake put to rest any worry about not being aggressive enough.

Running a successful fake punt at their own 31-yard line was a bold early decision and what became the start of a huge night for the Huskies.

“We said way back in December 2019 that we were going to be aggressive and we we’re going to attack in all three phases,” Lake said.

Washington did attack on Saturday night, with Dylan Morris throwing for 230 yards and two touchdowns, and three different running backs finding the end zone in the Huskies’ 44-27 win over Arizona.

Washington (2-0) was thoroughly dominant, jumping to a 24-0 halftime lead and led 37-0 before Arizona finally found the end zone early in the fourth quarter. For a while, it appeared the Huskies could be in line to post their first Pac-12 shutout since a 30-0 win over Washington State in the 2009 Apple Cup, but the Wildcats feasted on Washington’s backup defense in the fourth quarter.

While the Huskies defense stifled the Wildcats for three quarters, it was Morris and the Washington offense that showed efficiency and explosiveness that was absent in last week’s opening win over Oregon State.

It started on the opening drive — after the fake punt — when Morris hit Puka Nacua on a 65-yard catch-and-run touchdown. He added a 20-yard TD pass to Cade Otton midway through the third quarter to give the Huskies a 37-0 lead. And in between, the Huskies got TD runs from Kamari Pleasant, Sean McGrew and Richard Newton.

Newton added a second TD early in the fourth quarter on a 54-yard run.

“When you’re able to pepper a defense with fresh guys over and over and over, behind a massive offensive line, that’s a good recipe to get some rush yards and wear people out,” Lake said.

Morris finished 15-of-25 passing and his numbers would have been significantly higher if not for a handful of dropped passes. His TD strike to Nacua was his first career TD pass, but his favorite target was Otton. The Huskies talented tight end had a career-high seven catches for 100 yards.

“We’re just going to what we can to be an efficient offense, to be an explosive offense,” Otton said.

Arizona (0-2) lost its ninth straight game dating back to last season — a streak that started with a home loss to Washington — and took a step back from last week’s loss to USC.

The same offense that rolled up more than 400 total yards and scored 30 points on the Trojans managed just 66 yards through three quarters against Washington. Arizona didn’t have a pass play longer than 14 yards until a 30-yard TD catch by Stanley Berryhill III early in the fourth quarter. For the first three quarters, Arizona averaged just 1.8 yards per play.

“The way things started off, it kind of snowballed from there,” Arizona coach Kevin Sumlin said. “There’s no doubt that this is a good football team we played tonight. But coming off last week, it’s disappointing. We’ve got to coach better. We’ve got to handle situations on the road. All those things. That’s where we are.”

Arizona quarterback Grant Gunnell was 27 of 39 for 259 yards and three touchdowns, almost all of those numbers coming in the fourth quarter against Washington’s reserves. He was sacked five times, twice by Zion Tupuola-Fetui.

“I just loosened up. I was uptight, looking at the D-line through the first three quarters and that kind of screwed us as an offense as a whole. That’s on me. So that’s probably what changed the most,” Gunnell said.

Lake said he had not heard of any changes for the upcoming week after Washington State’s game at Stanford was canceled due to COVID-19 cases with the Cougars. Lake said his staff has already started prepping for the Cougars and would ramp up the preparations on Sunday.

“First thing in the morning, all sights, all focus is on the Apple Cup.”

Washington: The Huskies continued to use their stable of running backs. Four different running backs had at least six carries and Washington had 233 yards rushing. Newton led the way with 81 yards thanks to his breakaway run in the fourth quarter. Pleasant had six carries for 43 yards and Cameron Davis had 40 yards on six carries.

Arizona: The Wildcats will travel to UCLA next Saturday.

Washington: The Huskies are scheduled to face rival Washington State in the Apple Cup next Friday.