SAN FRANCISCO - The Pac-12 Conference has set the schedule for its final weekend of football games, including the Pac-12 Championship Game on Q13 FOX.

The conference announced Sunday its teams will play six games, including Washington at No. 16 Southern California in the Pac-12 championship game. Coverage begins at 4:00 p.m. Friday on Q13 FOX. 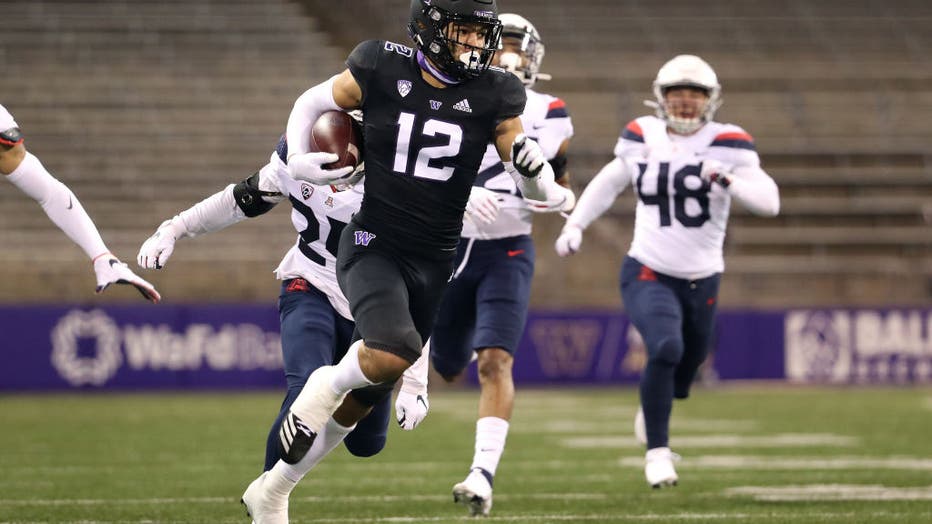 SEATTLE, WASHINGTON - NOVEMBER 21: Puka Nacua #12 of the Washington Huskies runs for a 65 yard touchdown in the first quarter against the Arizona Wildcats at Husky Stadium on November 21, 2020 in Seattle, Washington. (Photo by Abbie Parr/Getty Images

Oregon will face No. 21 Colorado at Memorial Coliseum in Southern California on Saturday. The winner of that game could slide into a rescheduled title game if the Trojans or Huskies are unable to play due to COVID-19 issues.

Saturday’s games also include Washington State at Utah, Stanford at UCLA, and Arizona State at Oregon State. Arizona will face California at a site and time to be determined. The Wildcats fired coach Kevin Sumlin on Saturday following a blowout loss to Arizona State.

The Pac-12 left the schedule for the final weekend of the season open to have flexibility in a year when the coronavirus pandemic has led to cancellations and postponements across the country.

USC earned a spot in the Pac-12 title game for the first time since 2017 by rallying to beat rival UCLA 43-38 on Saturday.

Washington earned its third Pac-12 North title in five years with a 38-21 win over Colorado.

The conference went to a home-hosted model for the championship game this season.