SEATTLE - Derek Chauvin has been found guilty on all three counts stemming from the death of George Floyd last spring.

Chauvin was the officer in the infamous video of Floyd's arrest seen kneeling on his neck for nine minutes. 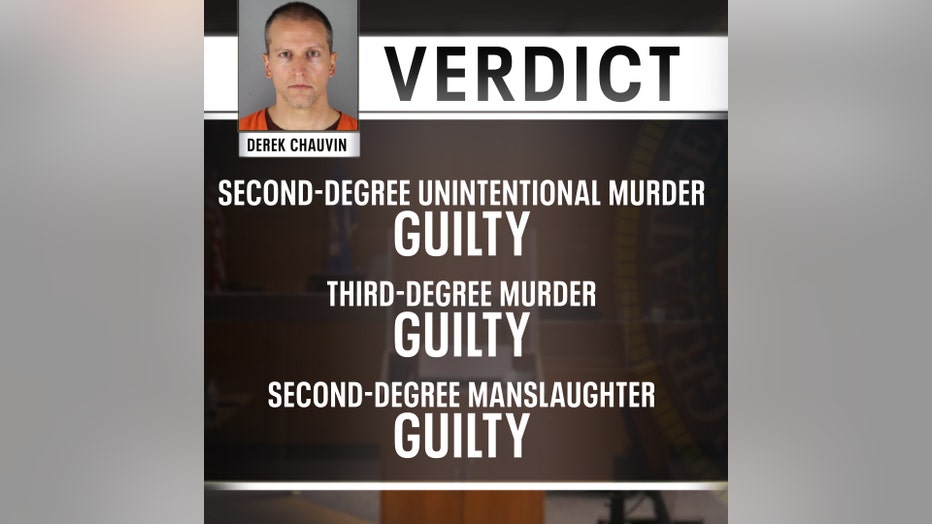 Officials in Washington, many of whom have been vocal on police reform and the protests that stemmed from Floyd's death, have weighed in on the verdict.

Anne Bremner a legal analyst discusses the jury's verdict to charge former Minneapolis police officer Derek Chauvin on all counts in the death of George Floyd.

"This was more than the death of one person. It was a trauma for George Floyd’s family, his children, the bystanders and indeed the entire nation. Weary families in so many communities, traumatized from images of brutality against Black and Brown and feeling no power to stop it, can take heart today that justice was served in this instance. Yet, there is still much work to do. This is one step on a long journey we are just beginning.

Today is a day for all to recommit themselves to a more perfect union, in their communities and in our nation. Let this be the beginning of progress rather than the end of one trial. Today’s sense of relief for some is fleeting. They know more must be done to prevent this from happening again and again. Too many live with this uncertainty. We must end systemic racism.

In Washington, we are reforming independent investigations into police use of force; clarifying the requirements for tactics; increasing oversight and accountability for law enforcement officer conduct; and establishing better standards for permissible uses of force.

But ending systemic racism goes beyond our justice system.

Our communities will not be at peace until everyone feels secure to do the most basic things. I’m talking about the right to vote. Or the right to get in the car and drive anywhere safely without fear of being killed. To walk down any street in America or go shopping at the department store without being selectively followed. To work regardless of what your hair or skin color looks like. To rent or buy a house in the neighborhood of your choice, or to get an insurance policy without being asked for a credit score. These ordinary activities must be available to all.

We must remain proactive – from those of us in elected office to those providing services in our agencies – to turn the tide of injustice. Dr. Martin Luther King, Jr. said 'the moral arc of the universe's bends toward justice, and it takes all of us to usher it into existence."

RELATED: How long is Derek Chauvin going to be in jail?

Derek Chauvin being led away

Derek Chauvin is seen being taken away in handcuffs after a jury found him guilty on all three counts surrounding George Floyd's murder.

"The Seattle Police Department knows that Mr. Floyd’s murder was a watershed moment for this country. The eyes of the nation saw in horrible detail what so many have been fighting to change. It was soul crushing. From that pain, though, real change as begun.

The events of the past year have made clear the community’s expectations of what police work should be.

The Seattle Police Department already is making changes to move towards a more equitable model of public safety.  We have banned neck restraints, chokeholds and no-knock warrants.

The SPD also requires Department-wide implicit bias and active bystandership training to empower officers to recognize and intervene when a colleague is doing wrong."

In the statement, SPD also acknowledged that it is taking several reform measures in response to police use of force that stemmed from Floyd's death and subsequent protests.

Seattle gained national attention during the summer 2020 protests, which turned into riots and led to the formation of the Capitol Hill Occupied Protest zone. Protestors occupied several blocks in the Capitol Hill neighborhood for weeks.

"We are heartened to hear that Derek Chauvin has been found guilty of murder in the death of George Floyd – but we are not satisfied. This verdict shows that the thin blue line of police silence can be broken; that police officers have it within them to stand up and hold their fellow officers accountable; that prosecutors can muster the resources and evidence to secure a guilty verdict against police when they have the will do to so; and that juries are capable of seeing the truth, which is that Black and brown people in America continue to be killed by police for no other reason than the color of their skin.

But this is just one verdict, and it came only after a summer of nearly non-stop mass protest, with echoes of Mr. Floyd’s last words, "I can’t breathe," filling streets from Seattle to Washington, D.C. It should not take a national movement to secure justice for a single Black man killed by a police officer. But it did, and it will.

Because we know that our work is not done, that Black and brown people continue to be targeted, assaulted and killed by police every day, and that they rarely see justice. We see it in our backyard, in King County, where Black and Indigenous people are killed at a vastly disproportionate rate. We live in an America where white people can storm the U.S. Capitol and go home safe and unarmed, while Black and brown people are effectively sentenced to death for counterfeit dollar bills and loose cigarettes.

It has to stop. We cannot accept the status quo. It is time to end policing in Seattle and King

County as we know it and build a new system that honors Black and brown lives. As our community celebrates this rare victory tonight, we must channel our emotion into sustained action. We must fight to secure justice for other victims of police violence. We must remember those here in King County who have lost their lives at the hands of the police: Shaun Suhr, Charleena Lyles, Tommy Le, and too many others. We must strive for a day when holding police accountable is routine. We must not let this day be an anomaly.

And as we honor this moment, we must do so with respect for our community and each other. We must be ready to take action tomorrow."

"The jurors and our system of justice have confirmed what we saw with our own eyes.  George Floyd was murdered and Derek Chauvin violated his most solemn duty to protect lives and uphold the law. The cruel and degrading murder of Mr. Floyd shook our nation but for too many Black Americans, his murder reflected an all too often reality of the deep and systemic impacts of racism in our country.

True justice demands that we admit, recognize and work to address those systemic inequities.  True justice would have meant that George Floyd, Breonna Taylor, Eric Garner and countless others never suffered this fate.  Although he should still be here today, jurors delivered justice for George Floyd’s friends, family, loved ones and the millions of Americans who mourned and marched for justice."

Though this trial is over, and we await justice to be served at the time of sentencing, the work to dismantle institutional racism in our country has far to go. Just as John Lewis and others trying to cross a bridge in Selma decade ago galvanized a nation, the murder of George Floyd showed too clearly how much was left undone.  Just since this trial began,  Daunte Wright was stopped and died at the hands of police just mere miles from where Mr. Floyd himself was killed. We must demand better than this everywhere in our country.

Our country must acknowledge and work to dismantle the reality of institutional racism and its insidious impacts on all aspects of our society, including policing. Our country must work to ensure that the promise of America really is available to all Americans.  Our country must work to ensure true justice and access to education, employment, healthcare and prosperity. Every family deserves to build generational opportunity instead of intergenerational trauma or despair. We have made some systemic changes in Seattle including new alternatives in policing and historic investments in Black, Indigenous and people of color communities. That work will continue.

Our community has been through a lot of pain and grief in the last year. In the coming days, many in the community will peacefully come together to remember the life of Mr. Floyd, express themselves, and experience community with one another. As always, we will do all we can to protect the cherished right to assemble and express first amendment rights, but we will also make sure we maintain public safety, protect people, and protect the safety of every community."

"With today’s announcement of a guilty verdict in the Derek Chauvin trial, we want to acknowledge the crushing weight and deep impacts that the death of George Floyd, this subsequent trial, and the wait to get to this verdict have had on our community and the entire nation. Juries play a crucial and oftentimes difficult role in our justice system, and we want to express our appreciation for this jury’s efforts to come to a decision in this monumental case.

While the trial of Derek Chauvin comes to a close, we recognize that this historic moment alone does not lift the tension and weight that currently rest on our city or our country. As we reflect on today’s national news, we also acknowledge the continued local impacts of ongoing investigations – including the one into the death of Manuel Ellis – right here in Tacoma."