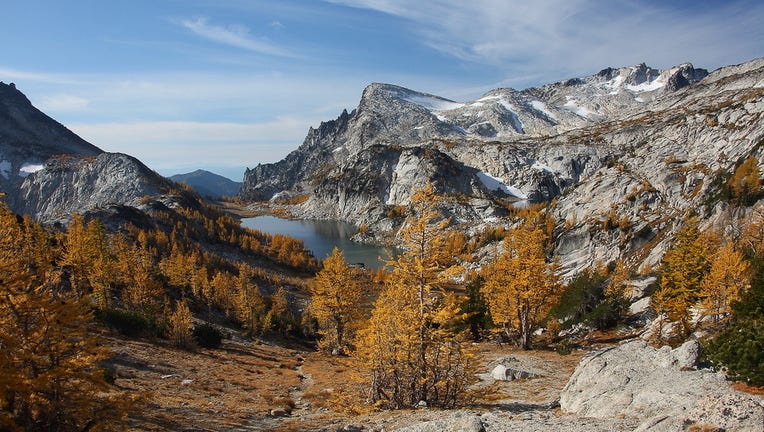 View of the Enchantment Basin from Prusik Pass in the Alpine Lakes Wilderness on the Okanogan-Wenatchee National Forest in Washington's Cascades. (Jeffrey Pang // CC BY 2.0)

SEATTLE - Washington Indigenous tribes have proposed new names for several natural locations around the state. This follows orders from the U.S. Department of the Interior to rename geographic features with derogatory names.

The Washington State Committee on Geographic Names has been working to remove such names for years.

Specifically, the committee and tribes are looking to remove the word ‘squaw’—an ethnic and sexual slur historically used to refer to Indigenous women. The word is considered universally offensive by Native Americans and First Nation people. In 2021, Secretary of the Interior Deb Haaland declared the term to be derogatory, and formally ordered it be removed from names of natural locations.

The Department of the Interior originally suggested renaming features to names like ‘White,’ ‘Columbia,’ ‘Bonneville’ or ‘Franklin Delano Roosevelt,’ but the committee argued in April that this was an inappropriate solution.

In total, the committee received 17 proposals from the Yakama Nation, Colville Tribes, Quinault Indian Nation. Of them, 11 were accepted for final consideration.

Most proposals look to rename geographical features to phrases or names in Indigenous languages—for example, two Columbia River islands in Klickitat County would be named "Sq’wanana," meaning "two sitting on lap" in the Wishxam language. A stream in Skamania County that flows into Little White Salmon River would be named "Shluxiksikswana," meaning "the eating place."

Others are named for notable people. A lake in Skamania County southeast of Blue Lake would be named "Aalvic Wahtum" in honor of Lucille Aalvic, a Yakama Nation woman removed from her home and family by the Army Corps of Engineers during the construction of the Bonneville Dam. An unnamed mountain in Whatcom County will be named "Kloke Peak" after Dallas Kloke, an Anacortes mountain climber who ascended the peak in 1972.

Others still are officially changed to the names traditionally used by tribes. For example, a certain creek in Jefferson County would be renamed to "Noskeliikuu," meaning "the place where the whale dropped"—which has been used in Quinault tribal histories for at least four generations, according to DNR.

Once the committee approves these proposals, they forward them to the Board of Natural Resources. If the board accepts them, they are officially added into Washington Administrative Code and sent to the U.S. Board on Geographic Names for federal review.

For more information, visit the DNR’s page for the Committee on Geographic Names.

Currently, the full list of approved recommendations are as follows: