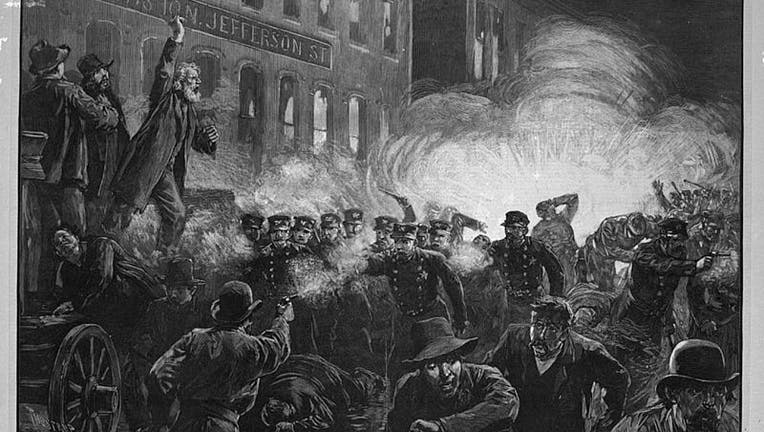 The Haymarket Affair. From Wikimedia

SEATTLE -- May Day is the celebration of two holidays with apparent different meanings in the U.S.

First, May Day signifies a Spring holiday. Gifts such as flowers, baskets and little spring trinkets are often handed out May 1. In some American traditions, the gift giver must hand out the gift in secret, and if they are caught handing it away – such as putting a flower on a sweeties’ door – they are required to kiss the recipient.

May 1 also coincides with International Workers’ Day, the commemoration of the Haymarket Affair in 1886 in Chicago.

The event – which actually happened on May 4 – was organized by many workers marching and protesting for an eight hour work day. As marchers were told by police to disperse, someone through a bomb into the crowd, killing one police officer.

Police quickly arrested eight men – mostly immigrants --, calling them anarchists. The men were put them on trial, and all eight were found guilty with little or no evidence.

The trial was widely publicized, and used to incite fear of “anarchists,” labors unions, immigrants and socialism. Many feared anarchists after the event. Jurors were hard to find because of the negative press the accused received, and the judge himself openly mocked the accused.

During the trial, Oscar Neebe, one of the accused, famously told the court that it was police who should be feared, as following the Haymarket Affair they ransacked homes at will in an effort to find union members and “anarchists.”

“You need not laugh about it, Captain Schaack,” Neebe said to the court. “You are an anarchist as you understand it. You are all anarchists in this sense of the word, I must say.”

Death sentences provoked outrage from labor unions and workers, and following the guilty verdict and a couple of choice media reports, the tide of sympathy quickly changed.

Over time, the narrative on the incident continued to move toward the guilty, who were ultimately seen as martyrs with little or no guilt. Many decided corrupt police, shoddy justice practices, and politicians with an agenda as those to blame for the bombing and subsequent hanging of the accused.

Workers’ Union participation nearly doubled a few years after the event, ultimately leading to the 8-hour work day. The slogan "8 Hours for rest, 8-hours for work, 8-hours for what we will," helped bring attention to the movement.

International Workers Day was widely celebrated as such, until an anti-communism wave in the mid 20th Century again put back socialist ideals.

Lately, holiday has combined with workers’ rights marches for immigrants’ rights issues, often seen as a problem in tandem. Since the financial collapse in 2008, many anti-establishment ideas have taken up the forefront of May Day Celebrations, culminating with the Occupy Movement in 2011/12.