Hanneman, 49, died Thursday of liver failure in Southern California, the band said in a statement. 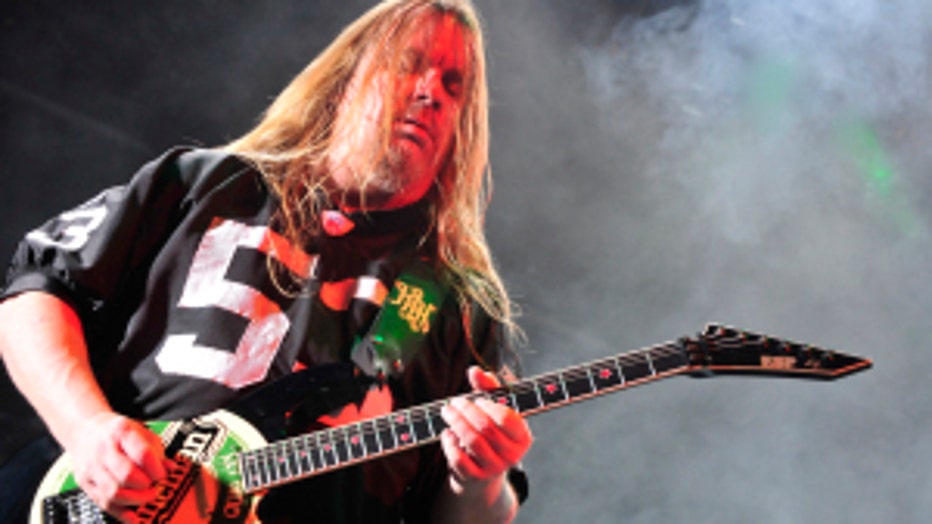 Though there was no official word from a physician or medical professional about Hanneman's death, several news outlets reported what Hanneman's band said in a statement Friday -- that the rocker's death was connected to a spider bite that he suffered at least more than a year ago.

On the band's website, a statement read that in January Hanneman "had contracted necrotizing fasciitis "likely caused by a spider bite, and has been undergoing surgeries, skin grafts and intense rehab since."

Necrotizing fasciitis is a flesh-eating condition.

On Friday, CNN's Elizabeth Cohen spoke to Dr. Donna Seger who routinely treats spider-bite victims at Vanderbilt University Medical Center in Tennessee. The state is known for its recluse spider population. Seger, a medical doctor, is the medical director of Tennessee Poison Center and professor of medicine and emergency medicine at Vanderbilt.

She said that spider bites do not lead to organ failure. But infections -- which could develop after a variety of scenarios ranging from a mosquito bite or even a scratch on the skin from a nail -- can sometimes lead to bad outcomes. Could Hanneman have been suffering from an infection? And from what?

Without his treating physician weighing in, that is unclear.

Seger stressed that, on the whole, patients with spider bites recover fine if they follow medical instructions and keep their bite areas clean so that a scab can form and fall off.

"I think it's really important that spider bites be understood because there's so many urban legends about, you know, you get a spider bite, your limb falls off and you die," Seger said. "That doesn't happen."

Separate from discussion on the cause of death, the musician's passing reverberated throughout the music community.

The guitarist was with Slayer from its founding in 1981. Its breakthrough came five years later with the release of "Reign in Blood," an album that included two songs -- "Angel of Death" and "Raining Blood" -- co-written by Hanneman.

That was one of 10 studio albums that the band put out over three decades together, during which they performed thousands of shows.

On Slayer's official website, Hanneman said that the last one -- "World Painted Blood" -- came together quickly because the band's members worked seamlessly.

"The interaction between all of us on this record was really something special," he said. "... The chemistry was just good."

In 2006 and 2007, Slayer won Grammy awards for best metal performance.

The metal world -- in tweets from, among many others, the bands Rancid, Hatebreed, In Flames and Testament -- reacted to Hanneman's death with sadness and appreciation, referring to him as a "true heavy metal legend" and a "brother in thrash."

"Jeff Hanneman will always be a metal god," wrote rocker Andrew WK. "A true master, he gave energy and excitement to millions, and will continue to. #PartyForSlayer."