SEATTLE -- The Pacific Northwest is coming out of some of the worst air quality it has seen in years.

And according to at least one analysis by the nonprofit Berkeley Earth, a week of breathing  the air was akin to smoking around 50 cigarettes.

Or, about 7 cigarettes each day.

The analysis, called "Air Pollution and Cigarette Equivalence," equates one cigarette to an air pollution rating (AQI) of 22 for one day. So someone living in an environment with 22 AQI would effectively be smoking a cigarette every day.

An average AQI for Beijing is around 85, meaning Beijingers -- simply by breathing the air -- are harming their health to the equivalent of four cigarettes every day. 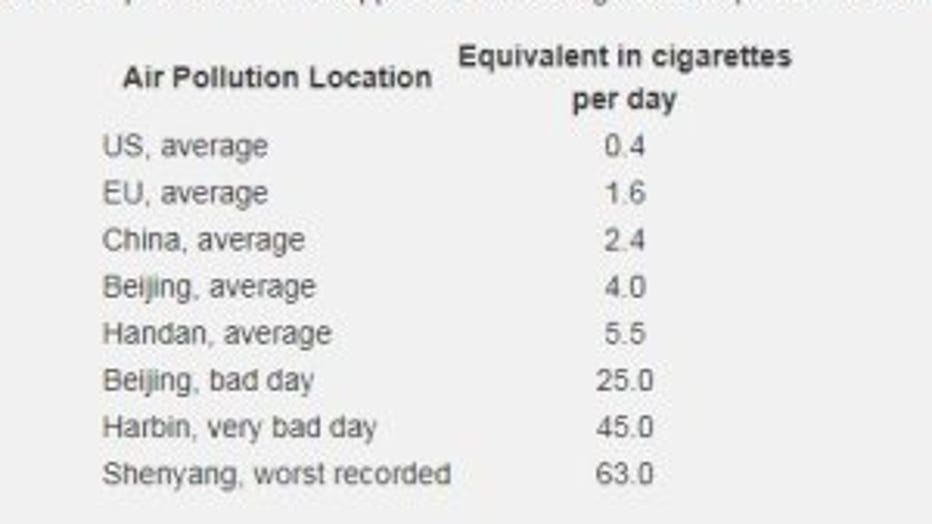 Joel Kaufman, the dean of the School of Public Health at the University of Washington, said people often make the comparison between poor air quality and the amount of cigarettes smoked. It's not a perfect comparison, but it's not completely off-base, either.

"It's not exactly equally toxic," Kaufman said. "But you can kind of compare breathing polluted air to breathing in cigarettes."

Different things can impact air quality for individuals; wood smoke, coal, traffic, cigarettes, etc. Some harm more than others, but all are considered 'harmful particulate matter' of 2.5 microns or less. Particles of this size can work their way past lung cilia, and into the bloodstream. From there, they can trigger heart attack, strokes, or even cancers after prolonged exposure.

However, the air impacted people's immediate health. People with weakened immune systems or a propensity for asthma were at risk.

"This kind of pollution is a trigger," Kaufman said, explaining that people with asthma were more likely to suffer attacks during the week of bad air.

Seattle's air quality is expected to improve to normal levels in the next few days.