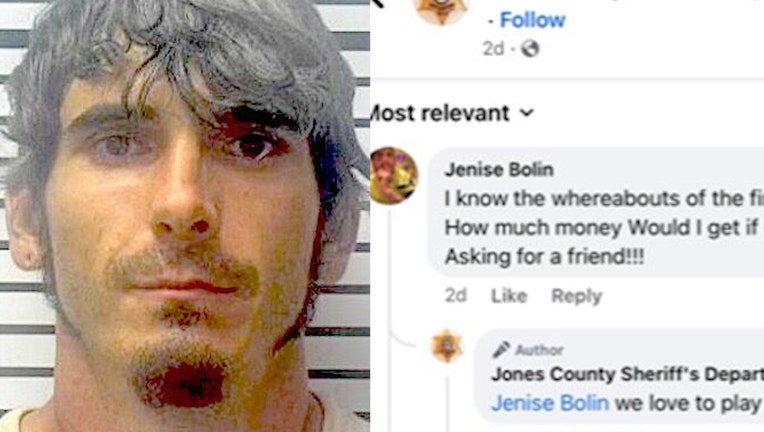 LAUREL, Miss. - A wanted man was captured in Mississippi after trolling authorities on their Facebook page.

The Jones County Sheriff’s Office wanted 31-year-old Jenise Bolin for a bench warrant after he failed to appear in court for a methamphetamine possession charge.

Deputies posted his picture, along with other suspects, as part of their "Most Wanted" post on their Facebook page on November 15.

Bolin himself commented on the post saying, "I know the whereabouts of the first individual. How much money Would I get if I turn him in? Asking for a friend!!!"

Deputies went along and responded "We love to play hide and seek" and "ring around jones countyyyyy."

The exchange then led authorities to track down Bolin at his home.

"Jones County Sheriff’s Department Sergeant Lance Williams and Deputy Bradley Boyd went to his residence on Tower Road in Jones County to see if he might be there and he was standing in the front yard," spokesperson Lance Chancellor told FOX Television Stations. "Bolin raised his hands and surrendered peacefully."

"He did ask the deputies if they got a photo of him being arrested and could we tag him in it on Facebook," Chancellor continued.

RELATED: Coroner: Idaho students were stabbed to death in their beds, likely asleep

Chancellor said Bolin’s Facebook post didn’t give away his location, but it gave deputies extra motivation to search and find him.

"Trolling us on Facebook probably isn’t a smart thing to do," he said. " We do, however, enjoy a good game of Hide-N-Seek."

Bolin is now in custody.