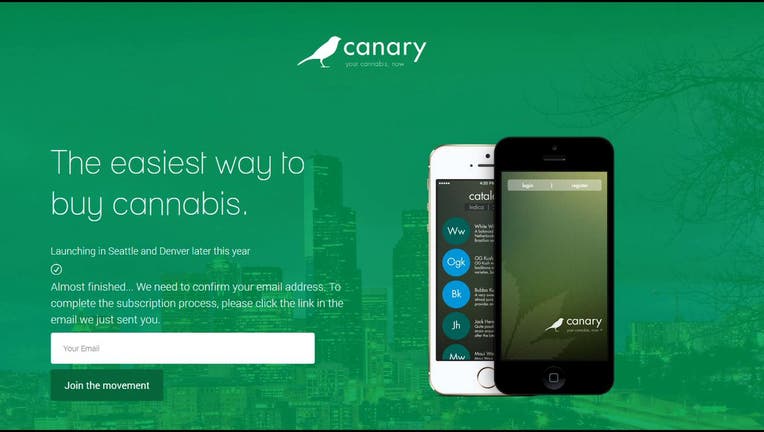 SEATTLE -- Are you looking for pot? There’s an app for that.

A pair of UW students hope their new smartphone app will do for marijuana what Uber has done for rideshares in Seattle by delivering weed to your front door.

The app is called Canary and the developers hope to get their business off the ground by the end of the year.

But other business owners who already have a license to grow and process marijuana worry that illegal delivery services are going to undercut their profits.

Business is blooming at the legal Sea of Green Farms. Room after room is filled with pot plants at Seattle’s first licensed marijuana grow operation.

“We should have our first product probably when our first retailers get their license,” said Philip Tobias with Sea of Green Farms.

But ever since marijuana was legalized, entrepreneurs are flooding the market with new ideas. But some, according to the state, operate beyond the authority of the Washington State Liquor Control Board, like the new smartphone app called Canary.

“I think a service like this is inevitable,” said Josiah Tullis with Canary. “Millennials today are very tech-savvy and pro-legalization and they’re used to app-based services like Postmate and Uber.”

It’s the brainchild of two UW students trying to cash in on a field of green.

“We actually don’t see the existing dispensaries as competitors, we see them as customers,” said Tullis. “We’d bring a lot of value to them with the app and we’d be willing to partner with them to offer their inventory on the Canary marketplace.”

Other services like Winterlife Co-op also deliver marijuana to your door in less than an hour.

But officials say those delivery methods are unregulated and illegal in Washington state.

“The laws right now, as far as we can tell, we’re trying to do as much as possible to fit within those guidelines and any laws that come about in the future we’re totally willing to do those as well,” said a Winterlife Co-op co-founder who goes by the name Otter.

While selling marijuana without a license is illegal, the makers of Canary hope regulators will find room for new technologies in a burgeoning field.

“These are sort of the legal gray areas that we’re trying to flush out more before we start partnering with dispensaries,” said Megh Vakharia with Canary.

And the people at Sea of Green Farms hope the state can soon ensure a level playing field for growing and selling marijuana.

“It’s going to be a tough one,” said Tobias. “Either they have to shut down or comply and get a license so they can do things like that. An unregulated business isn’t going to work here in the state.”