NEW YORK – Walmart has apologized for an offensive slur used by a third-party seller in a product listing on its website.

The cap listed the color as "n----- brown." It was highlighted in a series of tweets late Sunday.

"Umm, @walmart, we need to have a chat..." Travon Free, a writer for "Full Frontal with Samantha Bee," tweeted Sunday night. 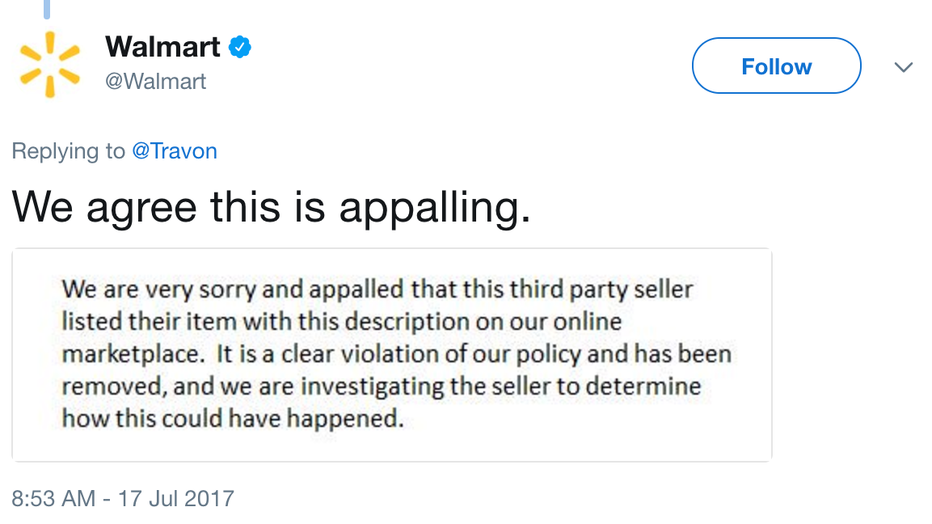 Walmart issued a statement Monday saying it too is upset by the use of the word on its site. Walmart declined to identify the vendor that was selling it.

"We are very sorry and appalled that this third party seller listed their item with this description on our online marketplace," said Danit Marquardt, director of corporate communications for Walmart. "It is a clear violation of our policy, and has been removed, and we are investigating the seller to determine how this could have happened." He said the third party seller has been completely removed from Walmart's site as it investigates further.

Walmart initially removed the offensive word from the title of the product, but it remained in the item's details, where the color is listed.

By Monday morning the term had also been removed from the details portion of the listing, and the item itself was no longer available. Only the black version of the cap appeared to be listed.

The cap was described as manufactured by Jagazi Naturals in the U.K., but that company's owner said the product is a counterfeit version of hers and was sold by an unauthorized seller.

"We're very sorry for all the distress this has caused. We are feeling the pain here as well," said Chizo Onuh of Jagazi Naturals. "It just doesn't make any sense. No one will buy the product when you put that offensive name on it."