SNOHOMISH COUNTY, Wash. – Just about everywhere you look in Western Washington you can’t help but notice a growing homeless problem.  It’s happening in downtown Seattle, in the suburbs, even camping along our waterways.  One local non-profit aims to clean-up the mess left behind.  River Junky Conservation started with one fed-up fisherman. 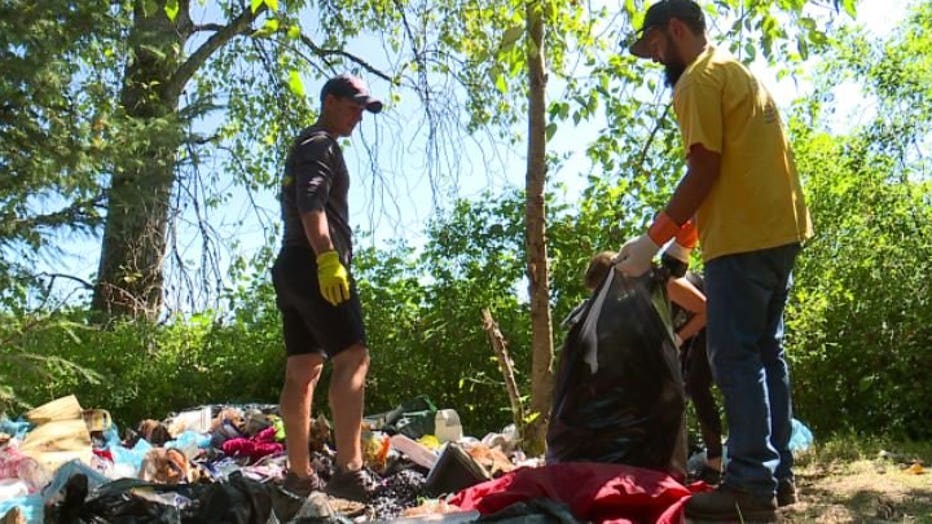 Dozens of volunteers dig deep into dumps of trash left over by fishermen, campers, and homeless people.

“We’ve seen the need to hold a lot of events and get a lot of raw manpower out here to move a lot of trash at once,” said River Junky Conservation President Jarrod Kirkley.

“I caught a nice fish and it came up on the shore and it was flopping around and I was going to keep it. It was a hatchery fish. And I picked it up and it had a hypodermic needle sticking out the side of it,” said Kirkley.

Since then, it’s been his passion to pick up after those who much up the river and its banks.

His last cleanup effort was a big one.

“We removed just under 17,000 pounds of trash in two hours with 96 volunteers,” said Kirkley.

Volunteers like Brandon Kuntz came with a great attitude and energy to clean.

“This weekend I was like hey let’s go clean up a river!” said volunteer Brandon Kuntz.

Seasoned river clean up Coordinator Greg Holm has been at every cleanup since the beginning and has seen it all.

The most common and most dangerous item volunteers find are needles.

“We have a few people that are hazmat certified. We do needle sweeps first and get all the hypodermic needles out of the way before we send in the volunteers to remove the trash,” said Kirkley.

It takes quite a few people to clear out quite a big mess so Kirkley asked him mom for help to draw out more volunteers on social media.

“Take a picture picking up trash by the waterway post it to the page and we send out a prize for free,” said Elaine Ray.

Volunteers usually get a prize that is fishing related, but Holm says you get something else for helping out.

The River Junky crew is trying to get state-funded, but for now, the organization relies on sponsors and private donations.