LOS ANGELES (AP) -- Actress June Foray, who gave voice to Rocky the Flying Squirrel and hundreds of other cartoon characters and was sometimes known as the "female Mel Blanc," has died in a Los Angeles hospital. She was 99.

Foray died Wednesday at West Hills Hospital in Los Angeles of cardiac arrest, but she had been in fragile health since a car accident two years ago, niece Robin Thaler said Thursday.

Foray was the best-known woman among the voice performers who contributed so much to the classic cartoons of Warner Bros., Disney, Hanna-Barbera and other studios. She had a galaxy of ways to create funny but believable characters, but could also be warm and wise in Disney's "Mulan" or, in a memorable "Twilight Zone" episode, chilling. 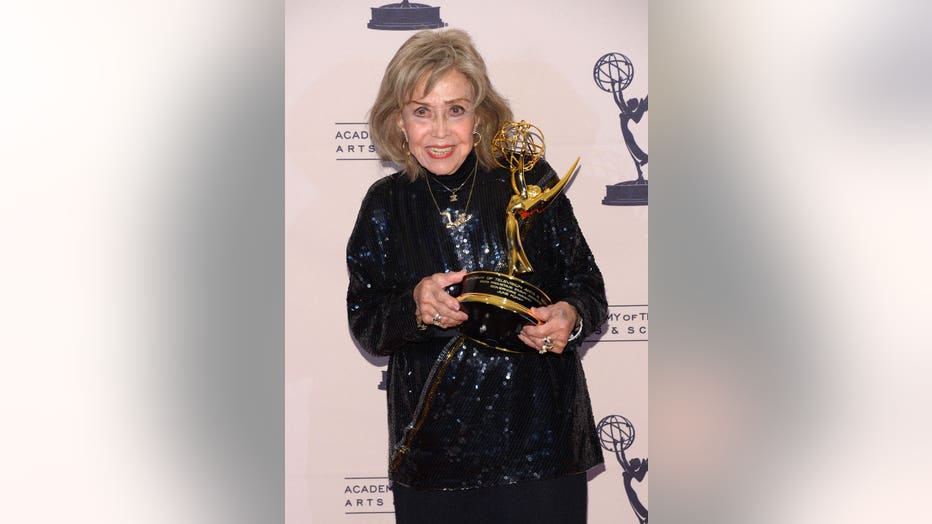 She had over 300 credits as a voice actress, most recently doing one last turn as Rocky in a 2014 short.

Born in Springfield, Massachusetts, Foray was a teenager when she moved with her parents to Los Angeles. She had begun performing in radio as a child in Massachusetts and, once in Hollywood, became active in major radio programs such as "The Jimmy Durante Show." She later called old-time radio a great training ground, forcing her to learn to be versatile and quick-thinking.

Among the legends she worked with were Chuck Jones and the other famed Warner's animators; Jay Ward, creator of "Rocky and Bullwinkle"; Rod Serling, creator of "The Twilight Zone"; radio and recording satirist Stan Freberg; and such cartoon voice talents as Daws Butler (Huckleberry Hound) and Blanc (Bugs Bunny, Sylvester).

In his 1989 memoir, "Chuck Amuck," Jones noted "the highly talented and versatile Mel Blanc" did voices for Bugs, Daffy, Porky, Tweety, Yosemite Sam and others, "except female voices, which were done by the equally talented June Foray."

"Everybody asks me that," she said in a 2000 Associated Press interview. "I think the fans kind of answer that for me. Everybody loves Rocky. I get letters from Belgium, Germany, all over. People don't think of him as a squirrel. They think of him as a person. And he's a good little person."

The diminutive Foray wore a gold Rocky pendent around her neck that she delighted in pointing out to people.

She was also fond of Rocky's pal, voiced by Bill Scott, as well. "Bullwinkle was a very sweet creature," Foray said. "He was not a stupid person. He was extremely ingenious. He was very faithful."

The original "Rocky and Bullwinkle" aired in 326 short installments as part of a series featuring other cartoon creations by Ward. The Cold War conflict pitted the moose and squirrel against the bumbling spies Boris Badenov and Natasha Fatale, to whom Foray also gave a voice.

Besides Bullwinkle J. Moose and Rocket J. Squirrel, the show featured such sequences as "Fractured Fairy Tales"; "Peabody's Improbable History"; "Aesop and Son"; and "Adventures of Dudley Do- Right."

"The shows were on two plateaus," Foray once said. "The children enjoyed it because of the humorous look of the characters and the sounds of the voices. The adults find it so inventive because of the puns, the satire. ... It was a show that was different from everything that came before it or after it."

In 1966, Foray was the voice of Cindy Lou Who in the much-revived TV holiday special "How the Grinch Stole Christmas," based on the Dr. Seuss book, directed by Jones and narrated by Boris Karloff. She worked with Jones on another classic children's story in 1973, voicing the mother in "The Cricket in Times Square."

Earlier, she worked with Freberg on his 1953 hit record, "St. George and the Dragonet," a parody of the "Dragnet" series, and teamed with Freberg again for his acclaimed historical comedy records "Stan Freberg Presents The United States of America. Vol. 1" in 1961 and "Vol. 2" in 1996, portraying a host of historical characters. She also contributed her voice talents to one of the best-known "Twilight Zone" episodes, a 1963 chiller about a talking doll that turns murderous.

"I'm Talky Tina ... and I'm going to kill you," the doll says to the hapless victim (played by Telly Savalas, later famous as "Kojak.")

For Walt Disney, her contributions included the voice of Lucifer the cat on his 1950 "Cinderella." At Warner Bros., she was the voice of Witch Hazel in several Jones films and Granny, the owner of Tweety Bird and Sylvester, in many cartoons, though Bea Benadaret (the voice of Betty Rubble on "The Flintstones") also voiced Granny in some early cartoons. For Walter Lantz she was Woody Woodpecker's nephew and niece, Knothead and Splinter.

Later generations might know her voice best as Grandmother Fa in Disney's "Mulan" from 1998.

As cartoon characters were recycled by Hollywood, Foray remained active into her 80s. She did Granny on "Tiny Toon Adventures" and reprised her Rocky role in the 2000 big-screen adaptation, "The Adventures of Rocky and Bullwinkle," a mixture of cartoon and live action starring Rene Russo and Jason Alexander. The film was poorly received, but she thought it had a good story line and "all the charm of Rocky and Bullwinkle."