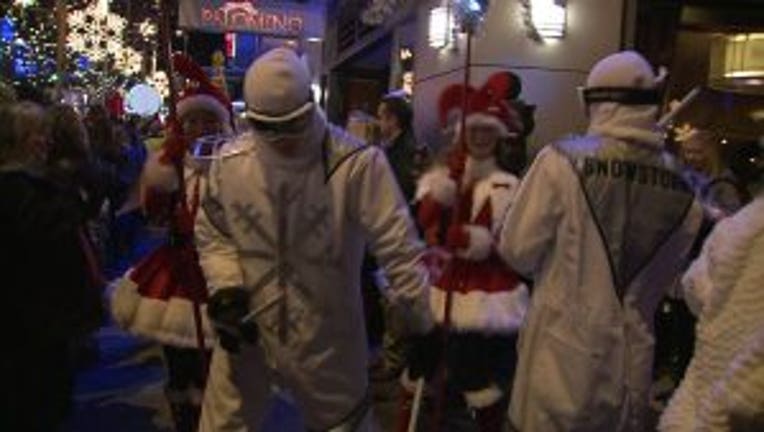 BELLEVUE, Wash. -- It's been snowing every night since Thanksgiving in downtown Bellevue.

Since Nov. 22, Bellevue's sidewalks have played host to Snowflake Lane, a 20-minute holiday performance that features drummers, singers and more than 122 Puget Sound area high school students performing holiday music and skits.The nightly holiday event takes place on the sidewalks between Bellevue Square, Lincoln Square and Bellevue Place in downtown Bellevue and draws as many as 300,000 visitors each year.

Kemper Freeman, a Bellevue developer who finances Snowflake Lane, said he got the idea for the event nine years ago during a trip to Saks Fifth Avenue in New York City.

"All of the sudden I could hear music and thought, 'Oh my God. That's just beautiful Christmas Music,'" Freeman said.

Freeman enlisted the help of a college buddy, and within a year of his New York trip, Bellevue's Snowflake Lane was born. The event now features elves, the princess court, jingle bell dancers and drummers. Most of those performing in the show are from area high schools. And many of the visitors are happy to see friends and family from the community in a show spreading holiday cheer.

"The snow, the music, the dancing," said Seattle resident Carrie Cook. "It gets you in the mood for Christmas."

The event costs Freeman nearly $2 million a year to produce with costumes, snow machines and other costly features. But for him, the "magical experience" is worth the money.

"When you see it starting to snow and the kids say, 'Mommy, it's snowing' and then they stick their tongue out and try to catch a snowflake in their tongue... that's the reason," Kemper said.