TRUTH OR CONSEQUENCES, N.M. - Sir Richard Branson is one of a handful of billionaires in the world, and the newest member of an even more exclusive club.

Branson, the 70-year-old founder of Virgin Group, become one of roughly 600 people to leave the Earth’s atmosphere when he flew to the edge of space on board a Virgin Galactic aircraft Sunday morning.

"Space is now Virgin territory," Virgina Galactic said during a live stream of the flight.

There was no warning or pre-launch coverage ahead of Richard Branson and five others blasting off into space on Sunday, July 11, from Spaceport America in New Mexico. David Mackay and Michael Massucci piloted Unity, the aircraft named by the late Stephen Hawking. Former NASA engineer Beth Moses will be on board, as will first-time space travelers Colin Bennett and Sirisha Bandla. Unity will take off from New Mexico while attached to a specially-designed double aircraft named after Branson’s mother, Eve. Former NASA astronaut C.J. Sturckow and Kelly Latimer will be piloting Eve. Once Eve reaches 50,000 feet, Unity will be released — briefly falling before its rocket ignites and propels the crew to space. There is expected to be a newser following the crew's return to Earth.

In a July 6 blog post, Branson wrote he's wanted to go to space ever since witnessing the moon landings as a young boy. When commercial spaceflights didn't look likely for his generation,  he registered the name Virgin Galactic with the hope of creating a company that could make it happen.

"As Virgin’s founder, I was honoured to test the incredible customer experience as part of this remarkable crew of mission specialists and now astronauts. I can’t wait to share this experience with aspiring astronauts around the world." Branson said after returning to Earth Sunday.

The six-person crew took off in New Mexico shortly after 10:30 a.m. ET. Nearly an hour later, the crew of Unity separated from Mothership Eve and rocketed higher into the sky. 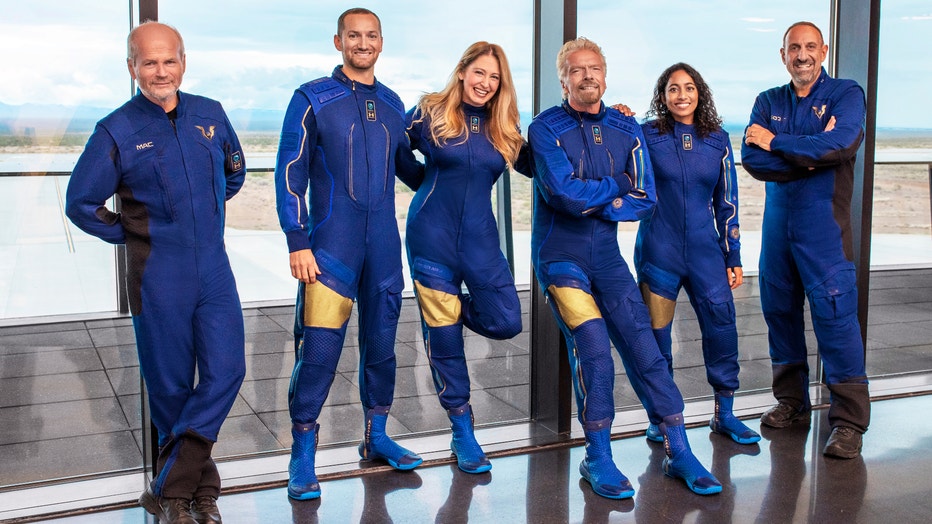 The crew experienced several minutes of weightlessness and took in the one-of-a-kind view only space travelers get to enjoy.

"I have dreamt about this moment since I was a child, but nothing could have prepared me for the view of Earth from space," Branson said.

Blast off! Richard Branson successfully flies to the edge of space | LiveNOW from FOX

Watch the exact moment the space ship detached from the mother shop to launch Sir Richard Branson to the edge of space. Branson is one of a handful of billionaires in the world, and the newest member of an even more exclusive club. Branson, the 70-year-old founder of Virgin Group, become one of roughly 600 people to leave the Earth’s atmosphere when he flew to the edge of space on board a Virgin Galactic aircraft on July 11, 2021.

Unity touched down roughly an hour after its voyage began. A triumphant Branson pumped his fists in the air as he left the aircraft stepped back on Earth. He and his family ran to each other, bearhugging one another.

A crowd of about 500 people applauded the launch, Eve's detachment from Unity, and Unity's safe landing.

"That was an amazing accomplishment," former Canadian astronaut Chris Hadfield, a one-time commander of the International Space Station, said from the sidelines. "I’m just so delighted at what this open door is going to lead to now. It’s a great moment."

Branson addressed the crowd roughly an hour after landing. he thanked the pilots and crew after a successful flight. He and other members of the crew received their astronaut wings.

Sir Richard Branson thanks pilots, crew after successful flight to the edge of space during a Virgin Galactic mission. He and other members of the crew received their astronaut wings when he was told, "Nice chest, Richard."

Branson became the first billionaire in space, beating Amazon’s Jeff Bezos by nine days. Bezos has a seat on the Blue Origin launch scheduled for July 20, which is the 51st anniversary of the Apollo 11 mission that put a man on the moon.

Bezos wished Branson luck the day before his launch. Once the Unity crew returned to earth, Bezos weighed in again, congratulating everyone involved.

Elon Musk, CEO of Tesla, has dabbled in space travel, though not personally. His company SpaceX is partnering with NASA for launches. And Musk has even expressed desires to put mankind on Mars.

He attended Branson's launch and even spent much of Sunday morning with him. Musk, however, has not expressed interest in joining the billionaire space race.

Virgin Galactic has plans for two more test flights this summer and fall. Eventually, paying customers will be welcomed onboard.

Ticket reservations are currently closed, but the company already has 600 confirmed ticket holders waiting to launch next year. The initial tickets sold for $250,000.

"Our mission is to make space more accessible to all," Branson said. "In that spirit, and with today’s successful flight of VSS Unity, I’m thrilled to announce a partnership with Omaze and Space for Humanity to inspire the next generation of dreamers. For so long, we have looked back in wonder at the space pioneers of yesterday. Now, I want the astronauts of tomorrow to look forward and make their own dreams come true."