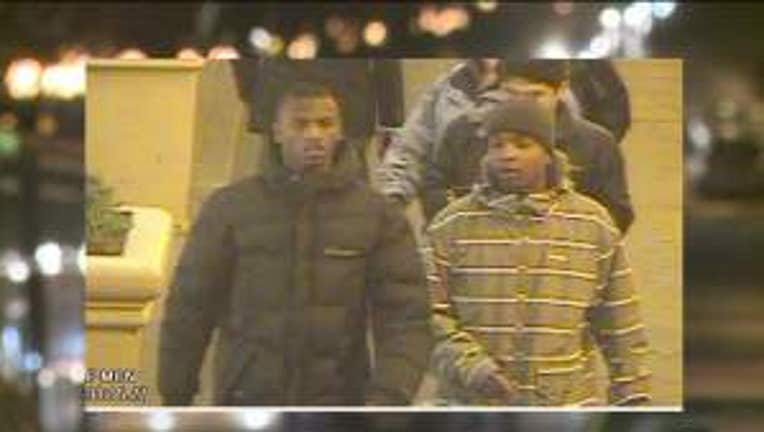 FUGITIVE CAPTURED Feb. 19, 2013 -- On February 19th, the Robbery Unit tracked the suspect, seen on the right of the photo, to the SeaTac Red Lion Hotel. He was located in a room on the first floor and taken into custody without incident. He was transported to the SPD Robbery Office for processing.  The 22-year-old suspect was booked into the King County Jail for Investigation of Robbery. FUGITIVES WANTED IN SEATTLE Feb. 1, 2013 -- Surveillance video footage captured two men working together to violently snatch a woman’s purse outside of Nordstrom’s in downtown Seattle last week. They are bold. They scout their victims and strike even in a crowd. One of the two men, seen in the video and photo, on the right in a gray striped shirt, is still at large, police said. On Jan. 25, in the midst of the downtown rush hour crowd, several city cameras captured the two men in the act.  The man in the gray striped shirt looks like he is casing the street. The two men walk in and out of Nordstrom’s on Pine Street, then minutes later they are back. As a woman heads toward the entrance, one strikes, grabbing her purse and knocking her to the ground. Then the two take off. “We don’t know how many victims; we have a lot of people, unbelievably, who don’t report it,” said retired police detective Myrle Carner. “She’s fortunate that she (the victim) didn’t get a concussion from the thing,” Carner said. The attack has some downtown shoppers on edge. One of the suspects  has since been arrested and is facing theft charges. Police are hoping someone will recognize the other suspect. “In my opinion, if this guy is that brazen in public, he’s going to do it again,” said Carner. Folks who live and shop in the downtown area say they try to keep safe. “I don’t really carry my designer purses because that makes you stand out,” said Seattle resident Myra Ayers. “I always keep my purse to the front of my body, make sure the zipper is in front, and I just hold on to it," said Seattle resident Amelia Sinnott. “I usually don’t carry cash, things like that I cannot cancel quickly if I got robbed,” said Ayers. “Being aware, especially in the city, who's around, you what kind of characters are around,” said Sinnott. If you recognize the guy in the striped shirt, call 800-222-TIPS.