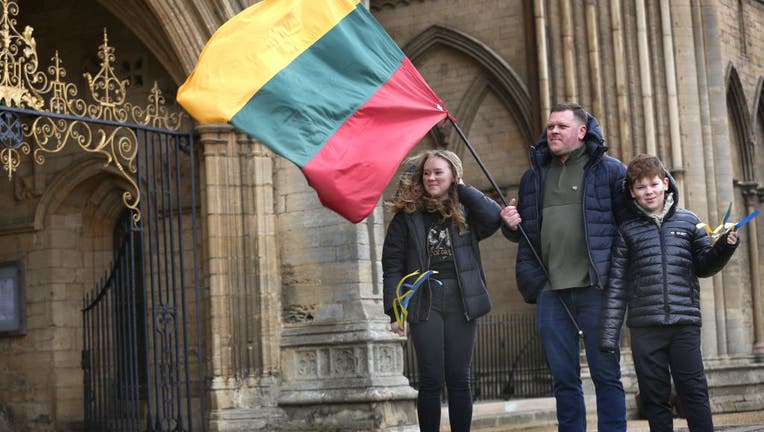 PETERBOROUGH, CAMBRIDGESHIRE, UNITED KINGDOM - 2022/03/12: A father holding a Lithuanian flag arrives at the prayer ceremony with his children with Lithuanian flags painted on their cheeks. At a time when Ukraine is under attack from Vladimir Putin's

VILNIUS, Lithuania - Vilnius, the capital of the eastern European nation of Lithuania, is celebrating its 700th birthday this January by doing what Lithuanians do best — being cheeky.

It may sound extremely meta, but the nation’s tourism department knows many people around the world don’t think much about its capital, let alone be able to find it on a map. That’s why it’s pulling off a cheeky advertisement campaign to bring awareness to the most unremarkable birthdays in the Earth’s history.

Apart from the typical festivities that Lithuanians get into, like sitting at a table and sharing a bowl of Šaltibarščiai or a delicious plate of Bulviniai Blynai, the city’s tourism office has created a campaign called "Belated Birthday Greetings," poking fun at themselves for being a fairly unknown travel destination.

Vilnius is like the kid who gets picked last at the school basketball court. So in order to make up for the last 699 years of neglect, you can actually send a ready-made e-card or even craft one on your own to wish Vilnius a healthy and fortuitous birthday, as one aspect of the campaign.

Another aspect is a 1990s-themed infomercial with the general message: "We know you forgot we existed but you’re invited to our birthday party anyways."

"Vilnius loves receiving birthday cards but almost nobody remembers its birthday," says the video narrator. "And it’s natural, nobody knows where Vilnius is."